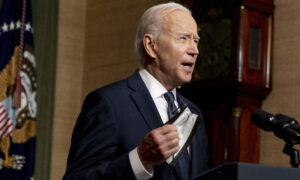 How to Start a War
0
Share Now
TelegramFacebookTweetEmailTellMeWeReddit
Copy Link 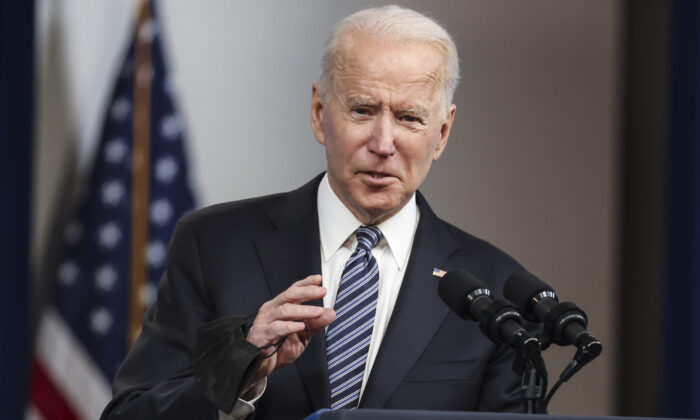 President Joe Biden delivers remarks from the South Court Auditorium at the White House in Washington on May 12, 2021. (Oliver Contreras/Sipa USA)
Viewpoints

Human nature stays the same across time and space. That is why there used to be predictable political, economic, and social behavior that all countries understood.

The supply of money governs inflation. Print it without either greater productivity or more goods and services, and the currency cheapens. Yet, America apparently rejects that primordial truism.

The United States is more than $28 trillion in debt—about 130 percent of the country’s annual gross domestic product. The government will run up a $2.3 trillion budget deficit for 2021 after a record $3.1 trillion deficit the year before.

In the crazy past 100 days, the price of everything from lumber, food, and gas to cars and houses has soared. Yet, many interest rates are still stuck at or below 3 percent.

Jobs are plentiful; workers are not. Is it a surprise when government handouts discourage the unemployed from taking a pay cut to go back to work?

After being freed from 13 months of quarantine, Americans are splurging. But this huge pent-up demand is causing shortages. Producers fear the Biden administration’s loose talk of higher taxes, greater regulation, and cutbacks in energy development.

Are the old principles really obsolete? Should we be printing money while expanding government debt? Is it wise to keep interest rates close to zero and to discourage employment, production, and thrift? This dangerous behavior used to ensure inflation, followed by ruinous stagflation.

After George Floyd was killed while in police custody in Minneapolis, some U.S. cities slashed police spending. Police response times have slowed in many places, perhaps because officers are worried about being fired for using force.

The result? In major cities such as New York and Los Angeles, homicide and violent crime rates have increased by double digits.

State and local governments believed they were exempt from primeval laws of deterrence that warned when criminals assumed they would not be caught and punished, then they committed more crimes.

Aggressive opponents such as Iran, North Korea, China, and Russia expect that the Biden administration will ignore their brinkmanship. They assume the administration will cut American defenses. And Biden sounds to them more critical of Trump foreign policy than of America’s enemies. Why not take previously unwarranted risks?

Apparently, the Biden administration did not believe that dictatorships and theocracies would interpret its virtue-signaling as weakness to be exploited, rather than as magnanimity to be returned in kind.

The old dictum of the Roman writer Vegetius—if you want peace, prepare for war—was just too much of a downer to take seriously.

In the old days, the greater the impediments to crossing a nation’s border—walls and the enforcement of laws—the less likely was illegal immigration. Here too, the Biden administration apparently rejected the ancient warnings.

Stopping construction of the border wall, promising amnesties in advance, and damning the tough enforcement of the previous administration has only led to more illegal immigration.

Refusing to call the chaos at the southern border a “crisis” did not mean it was not a disaster.

Wisdom of the ages also warned that humans’ first allegiance was to their own tribe, as defined by race, ethnicity, or religion. That existential danger is why multiracial nations always wisely sought to tamp down tribal differences, and to emphasize common ties of citizenship and transcendent common interests. Otherwise, a diverse country ended up like Lebanon, Rwanda, or the former Yugoslavia, where tribal feuding turned bloody and barbaric.

Yet for three months, the Biden administration has emphasized racial differences rather than our melting-pot commonalities. It has stereotyped America’s white population—hardly uniform in terms of class and ethnicity—as somehow uniformly enjoying unearned privilege and acting systemically racist.

Amid such talk, the danger is that racial tensions will increase, hate crimes will spike, racial demagogues will dominate, meritocracy will vanish, and tribal solidarity will replace it. And the ancient idea of America will unwind.

When an arrogant present dismisses the wisdom of the past, then an all-too-predictable future becomes terrifying.