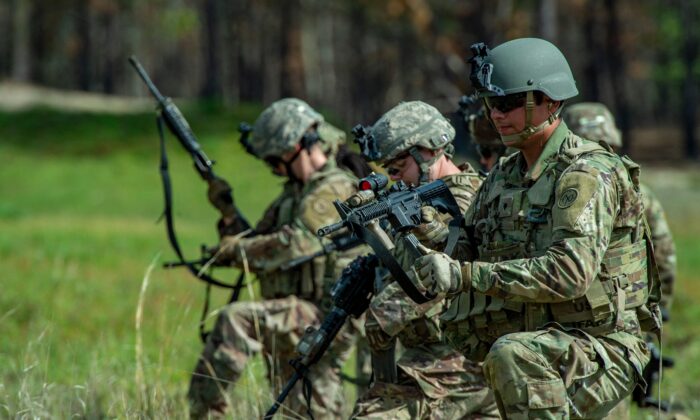 Members of the 182nd Infantry Regiment load their weapons with live ammunition before heading into the field to train at Fort Dix near Trenton, N.J., on May 16, 2022. (Joseph Prezioso /AFP via Getty Images)
Defending America

When the United States acts, the world is always watching, and one of the loudest messages since President Joe Biden took office came from how the United States handled its withdrawal from Afghanistan in August 2021.

What message did that send globally to other government leaders who may see America as an adversary? That was a question asked by Tony Perkins, president of Family Research Council, during a panel discussion Thursday about America’s role on the world stage at the Pray Vote Stand Summit in Atlanta hosted by FRC Action, the legislative affiliate of Family Research Council.

“I think that will go down in history as the worst foreign policy failure in U.S. history. Every decision that was made was wrong,” said Lt. General (Ret.) William Boykin, executive vice president at Family Research Council. “What did that say to the rest of the world? It said that we have weak leadership. And you have to ask yourself, why did Vladimir Putin refrain from attacking Ukraine during the Trump administration? And then he went in with barrels blazing, under the Biden administration, and I will tell you, I think a lot of that goes back to the weakness that people—both our adversaries and our friends—recognized in the Biden administration.”

Other countries recognize that the Biden administration is weak and indecisive on many issues, he said, not just how the U.S. military left Afghanistan.

Boykin mentioned Biden’s approach to the Paris climate change treaty and his efforts to get the United States back into the Iran nuclear deal, formally called the Joint Comprehensive Plan of Action (JCPOA).

“What’s the value to the United States? And what’s the value to our allies, to put Iran on a pathway to nuclear warheads,” Boykin said. “I think we’re going to continue to see the consequences of not only the pullout of Afghanistan, but stupid decisions that have been made by the administration, one of which is … our president shut down our pipeline, and then turned around and went to the Saudis.”

Boykin said there were several Saudi nationals flying the planes on 9/11 and that Saudi Arabia has been a major sponsor of terrorism. Despite this, Biden went to Saudi Arabia and to Russia to ask for oil after shutting down America’s oil production, Boykin said.

“Does that make sense to anybody? It’s the most foolish thing,” he said. “They see that kind of decision making, and they see us as being weak, and they see this as a time when they can take advantage of us.”

Boykin believes weakness is more than an international perception, and he gave examples of how Biden is intentionally weakening the military, including kicking out servicemembers who refused to get the COVID-19 shot and teaching critical race theory and inclusion tolerance instead of teaching how to be in a constant state of readiness for war.

“At the same time, they’re turning around and writing to old generals like me, saying, ‘We need help recruiting because we just can’t recruit enough people.’ Well let me explain to you how this thing of mathematics works. You get rid of all of them, and then those who are watching from the outside say, ‘I don’t want a part of that.’ And those on the inside, many of them leave on their own.”

Many in leadership at the Pentagon got their start under President Barack Obama, Boykin said.

“If they’re compromised—if they lack focus, the question we need to ask as a nation is, who’s mentoring the next generation of leaders? Who’s bringing up the warrior leaders for the future? The answer is nobody,” he said. “And that’s the hardest thing to fix in terms of restoring the Navy and the Army and Air Force and the Marine Corps.”

Perkins directed the conversation to China and asked panelist Gordon Chang, author of “The Coming Collapse of China,” how China likely views the Biden administration’s moves.

“We don’t have to speculate. The Communist Party propaganda was very clear,” Chang said.

The day that Kabul fell to the Taliban in Afghanistan, Chang said, Chinese newspapers declared that China would invade Taiwan at some point, and that when this happens, the island will fall within hours and the United States will not come to help.

“What they saw in Afghanistan confirmed in their minds, their long narrative, that the United States was in terminal decline,” he said.

Chang doesn’t believe the United States is in terminal decline, but that is the message from a series of propaganda releases and the effect of the Afghanistan exit, he said.

“The one thing that I’m most concerned about is that there will be some sort of accident in the international airspace,” Chang said, adding that this could start a war. “We have seen incredibly dangerous aerial maneuvering on the part of the Chinese. They almost brought down an Australian reconnaissance aircraft on May 26 because the Chinese jet flew so close to it and released flares. That’s something that’s never been done before, and I’m afraid that that is going to be the trigger of war in East Asia.”

“Not only is China involved in the world’s fastest military buildup since the Second World War. It is preparing the Chinese citizens for war,” Chang said. “That mobilization of citizens is an ominous sign.”

If China decides to do anything with Taiwan, Boykin said, it will be while Biden is still in office.

“They know that Joe Biden is not going to respond militarily,” Boykin said. “He will send material. He’ll give them intelligence and diplomatic support, but he’s not going to send U.S. troops into harm’s way against China, and that gives [China] an assurance. This is going to be their best window of opportunity.”