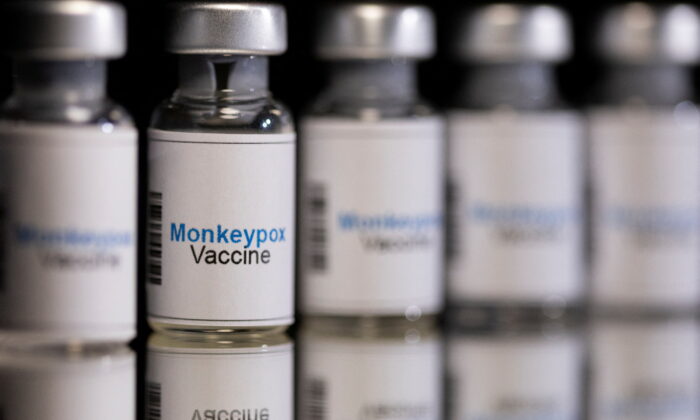 Mock-up vials labeled "Monkeypox vaccine" in this photo illustration taken on May 25, 2022. (Dado Ruvic/Illustration/Reuters)
US News

The White House is facing criticism for its failure to secure the stockpile of JYNNEOS monkeypox vaccines it owns in Denmark.

A June 28 letter sent to the commissioner of the U.S. Food and Drug Administration (FDA) and the Assistant Secretary of Health and Human Services (HHS) for Preparedness and Response pointed out that Americans have spent $2 billion since 2007 to “develop, manufacture, and stockpile” doses of the JYNNEOS vaccine as part of a federal security program.

At present, Washington owns over a million doses of the vaccine—enough to vaccinate more than 500,000 citizens affected by monkeypox—noted the letter sent by healthcare activist groups PrEP4All and Partners In Health.

But members of the at-risk community in the United States are being “turned away from monkeypox vaccination because these vaccines are not available in sufficient quantity in the U.S., but instead sitting in freezers in Denmark. We must not allow the same failures of vaccine production and distribution that hampered the global COVID-19 response cause us to fail to contain the current monkeypox outbreak,” the letter said.

The United States is unable to distribute its vaccines stored in Denmark to American citizens because the FDA failed to conduct a timely inspection of the facility holding the vaccines. The FDA then refused to accept inspection results from the European Union’s regulatory arm, which had deemed the facility as safe.

Dr. Raj Panjabi, the senior director of the White House National Security Council leading pandemic preparedness, argued that the FDA “by policy” will not accept EU sign-off or “reciprocity” for any vaccine, according to the New York Post.

James Krellenstein, co-founder of PrEP4All, which helped to expand access to medications that prevent HIV, strongly dismissed Panjabi’s statement, telling the Post that the Biden administration is “not being transparent” about what is going on.

“Why were the Europeans able to inspect this plant a year ago, ensuring these doses can be used in Europe and the Biden Administration didn’t do the same,” he said. “The FDA is making a judgment that they’d rather let gay people remain unvaccinated for weeks and weeks and weeks than trust the European certification process.”

In late June, monkeypox vaccines in Washington and New York City ran out the same day it was offered to citizens. The federal government was reportedly sending an additional 8,195 vaccines to New York.

In Los Angeles, officials are handing out doses to people who have had contact with an infected individual or those who attended an event deemed a high risk for exposure.

On July 1, the HHS ordered 2.5 million more doses of the JYNNEOS vaccine. As of July 7, there were 700 confirmed monkeypox cases across the United States.

Health officials say the infection spreads through contact with bodily fluids, sores, or shared items such as bedding or clothing that were contaminated with fluids. It can also be transmitted through saliva and sexual contact.

Most people who develop monkeypox only have mild symptoms that go away within two to four weeks without treatment.