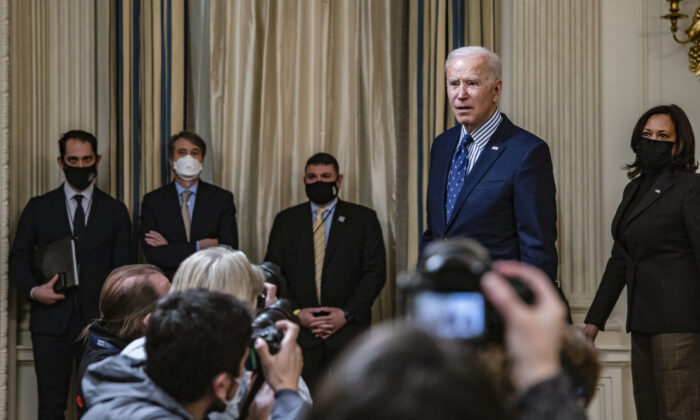 President Joe Biden stops to answer questions from reporters after speaking in the State Dining Room with Vice President Kamala Harris behind him following the passage of the American Rescue Plan in the U.S. Senate at the White House in Washington, on March 6, 2021. (Samuel Corum/Getty Images)
Executive Branch

WASHINGTON—The Biden administration has signaled that it could introduce gradual tax increases to help pay for spending initiatives, drawing criticism from Republicans who worry that the tax hikes would hurt the economy.

As part of his campaign promise, President Joe Biden proposed raising the federal corporate tax rate to 28 percent from the current 21 percent. And Treasury Secretary Janet Yellen in February indicated that the tax increases “would probably phase in slowly over time” and would help pay for Biden’s big-spending agenda to be proposed later this year, including investments in infrastructure, clean energy, and education.

According to Rep. Kevin Brady (R-Texas), a lead architect of the Tax Cuts and Jobs Act of 2017, Democrats will push for tax increases immediately after the signing of the $1.9 trillion relief package approved by the House Democrats on March 10.

“Tax increases are coming, there’s no question about it,” Brady told Fox Business on March 9.

“They intend to pair it with an infrastructure bill—although, right now, they’re spending almost $2 trillion with almost no impact on the economy.”

Biden’s rescue plan, which includes a new round of stimulus checks to households, aid for state and local governments, and expansion of the supplemental unemployment benefit, has now headed to the White House for signature.

Brady noted that the Biden administration has refused to provide an estimate about how many jobs will be created with the rescue plan.

“They’re thinking before Memorial Day, packaging tax increases on businesses, on income, perhaps on payroll, on wealth and energy” in their forthcoming infrastructure bill, he said, presuming that Democrats would move quickly without having discussions with Republicans.

The tax cuts of 2017, which was signed into law by President Donald Trump, reduced the corporate income tax rate to 21 percent from 35 percent beginning in 2018. It also reduced the tax rates for pass-through businesses and individuals.

Progressives criticized the cuts, calling it a giveaway to the rich and corporations. The Institute on Taxation and Economic Policy, a left-leaning think tank, found that 71 percent of the benefits of tax reform in 2018 went to the richest 20 percent with about a quarter going to the top 1 percent.

Some economists, on the contrary, believe the tax cuts have created prosperity and opportunity for all Americans. Business optimism soared to record-high levels and the unemployment rate reached a 50-year low following tax reform.

Increasing the corporate tax rate to 28 percent would raise the U.S. federal-state combined tax rate to 32.34 percent, according to the Tax Foundation, a conservative-leaning think tank.

This increase will make the U.S. corporate tax rate the highest in the OECD and among Group of Seven (G-7) countries, reducing America’s competitiveness.

The Tax Foundation’s modeling showed that raising the corporate tax rate to 28 percent would reduce long-run economic output by about 0.8 percent, eliminate 159,000 full-time equivalent jobs, and reduce wages by 0.7 percent.

He added that phasing in a corporate rate increase, as opposed to hiking immediately, “would in some ways be a worse idea, with firms delaying investment decisions as deductions would be more valuable against a higher corporate tax rate.”

“It would also make those investments less attractive in the long-run.”