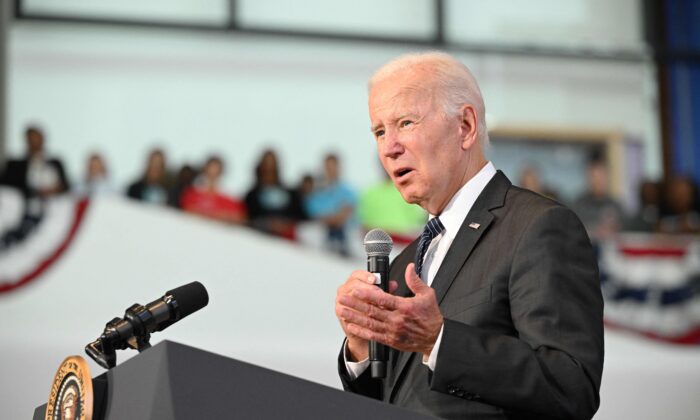 President Joe Biden’s administration has opted not to enforce a COVID-19 vaccine mandate for federal contractors, following a recent court decision that enabled the government to enforce the rule in some parts of the country.

The White House Safer Federal Workforce Task Force quietly updated its website on Aug. 31 to say that the government “will take no action to implement or enforce” Biden’s executive order mandating COVID-19 vaccination for contractors. Clauses in existing agreements that implement requirements of the order will also not be enforced “absent further written notice,” the task force added.

The task force also made other updates, including clarifying that screening for COVID-19 symptoms for contractors can be self-conducted and does not need to be verified by government workers.

The moves came after a federal appeals court partially lifted a nationwide ban on enforcement of the order. The decision, taken together with rulings from other courts, means the government could have begun enforcing the order in 39 states. Workers with the Associated Builders and Contractors (ABC), which has sued the government, were designated as exempt no matter where they’re based.

The task force didn’t respond to a request for comment on why it decided not to enforce the order. It said on its site that it wanted to “ensure compliance with an applicable preliminary nationwide injunction, which may be supplemented, modified, or vacated, depending on the course of ongoing litigation.”

The administration is already facing multiple suits regarding the mandate, and the decision could stem from wanting to avoid additional litigation, Ben Brubeck, ABC’s vice president of regulatory, labor, and state affairs, told The Epoch Times.

“I think it’s possible that they are worried that if they put the policy back in place they’ll end up getting additional lawsuits filed in some of those other states,” Brubeck said.

After the recent decision, the ban only remains in states that have sued or joined lawsuits over Biden’s order. Those 11 are Alabama, Arizona, Georgia, Idaho, Kansas, Kentucky, Ohio, South Carolina, Tennessee, Utah, and West Virginia.

One way to resolve the matter would be to rescind the order entirely. Biden’s administration has refused to do so as of yet, despite increasing calls to do so over waning vaccine effectiveness and a growing number of people who have protection from prior infection.

“That would provide more certainty for the entire federal contracting community. Obviously, if they did rescind the policy, I think people would be able to focus on bigger issues,” such as labor shortages and surges in material costs,” Brubeck said.