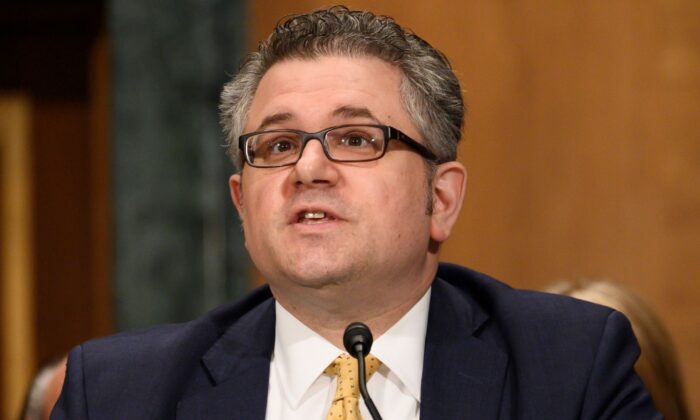 In a staffing shuffle at the top of the federal agency that oversees mortgage giants Fannie Mae and Freddie Mac, the Biden administration on Wednesday fired Trump appointee Mark Calabria following a Supreme Court decision that cleared the way for his dismissal.

The Supreme Court ruled on Wednesday in the case, Collins v. Yellen, that the structure of the Federal Housing Finance Agency (FHFA), which oversees Fannie and Freddie, is at least partly unconstitutional, effectively striking down a restriction that only allowed the president to fire the head of the agency for cause.

Within an hour of the ruling (pdf), President Joe Biden fired Calabria, a Trump administration appointee who had pushed to end government control over the two mortgage giants.

Calabria said in a statement that he respects the Supreme Court ruling and Biden’s authority to remove him.

“It has been the honor of a lifetime to serve as Director of the Federal Housing Finance Agency alongside world-class staff,” Calabria said, warning however that “much work remains” and that “when the housing markets experience a significant downturn, Fannie Mae and Freddie Mac will fail at their current capital levels.” He wished his successor “all the best in fixing the remaining flaws of the housing finance system in order to preserve homeownership opportunities for all Americans.​”

The White House on Wednesday replaced Calabria with Sandra Thompson, who since 2013 has served as deputy director of the FHFA’s Division of Housing Mission and Goals, with immediate effect.

“I am honored that President Biden has designated me to be Acting Director of the Federal Housing Finance Agency until a permanent Director is confirmed,” Thompson said in a statement.

“As a longtime regulator, I am committed to making sure our nation’s housing finance systems and our regulated entities operate in a safe and sound manner,” added Thompson, who prior to joining FHFA spent 23 years working for the Federal Deposit Insurance Corporation (FDIC), an agency that protects depositors in the event of bank failures.

For decades, Fannie Mae and Freddie Mac have served as integral cogs in the U.S. housing market. The pair were created by Congress as private enterprises and given a mandate to help potential homeowners secure mortgages at affordable rates.

In 2008, the government seized Fannie and Freddie at the height of the financial crisis as they teetered on the brink of insolvency, with the government injecting around $190 billion into the companies and taking a majority stake in each, while placing them under the supervision of the FHFA, which was created at the same time.

In 2012, the Treasury modified its bailout agreement to require nearly all the firms’ profits be channeled to the government as dividend payments on its preferred shares, prompting a lawsuit by some investors.

The Trump administration sought to put Fannie and Freddie on a more stable financial footing by returning them to private ownership.

In its ruling Wednesday, while the Supreme Court determined that the president has the power to remove the FHFA head, it also upheld the profit sweep and ordered the shareholder claims on that issue dismissed.