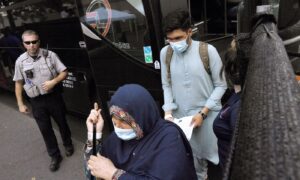 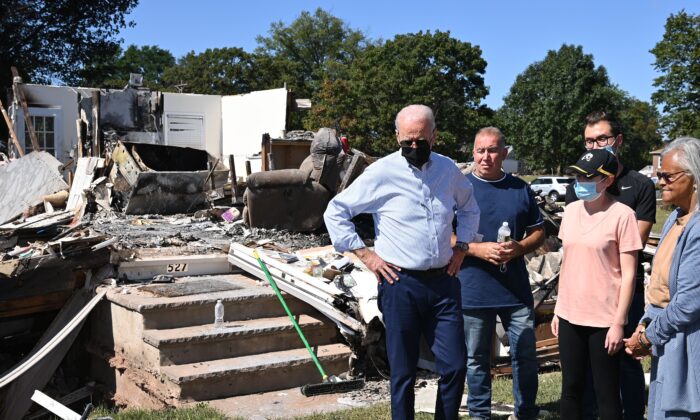 The White House on Tuesday asked Congress to approve billions in spending to address the ongoing crises created by the disastrous Category 4 Hurricane Ida and the Afghan refugee crisis in the aftermath of the U.S. withdrawal from Afghanistan.

The request came after a bipartisan delegation of Louisiana congressmen asked the president in a Sept. 2 letter for emergency federal aid.

The delegation—consisting of Sens. John Kennedy (R-La.) and Bill Cassidy (R-La.) and Reps. Clay Higgins (R-La.), Steve Scalise (R-La.), Mike Johnson (R-La.), Garret Graves (R-La.), Julia Letlow (R-La.) and Troy Carter (D-La.)—said in the letter, “We are writing you now to alert you to the need for Congress to provide emergency supplemental appropriations to address Hurricane Ida and [other] storms from last year, as was done following Hurricane Katrina. Without substantial and robust appropriations from Congress … Louisiana families will continue to languish as a result of these devastating storms.”

In response, the White House has set a target of $24 billion in funding to deal with continuing problems in Louisiana and other affected states.

Shalanda Young, acting director of the Office of Management and Budget, proposed that the funding be put into a stopgap bill. In the midst of heated intra-party debates over Sen. Bernie Sanders’s $3.5 trillion budget proposal, Young wrote that “it’s clear” that Congress will need more time to put together a comprehensive budget for 2022.

The stopgap measure would essentially provide funding immediately without needing to be part of the larger budget bill.

In the immediate aftermath of the storm, more than one million Louisianans were without power. Over a week after Louisiana was battered by Ida, PowerOutage.us recorded that more than 400,000 people are still without power.

Analysts have also catalogued the extremely high cost of Ida. Joel Myers, a founder and executive of Accuweather, estimated a huge $95 billion in damage from the storm. Moody’s chief economist Mark Zandi has estimated that the damage to physical infrastructure—property, buildings, and public infrastructure like roads and bridges—is near $50 billion.

Before this request from the White House, Biden had already sent some emergency assistance to the state.

Biden told the governors of Mississippi and Louisiana that the federal government would do everything in its power to address the crisis. “We’re there to help you get back on your feet,” Biden said during that meeting. “People in Louisiana and Mississippi are resilient, but it is in moments like these that we can see the power of government to meet the needs of people and respond to people, if government is prepared to respond. That is our job.”

As part of this response, the federal government has mobilized 5,000 National Guardsmen across the southeastern states. To address severe damages to the two states’ power grids, the government has also sent over 25,000 electrical crews and linemen to the region.

To address cell phone outages, Biden’s Federal Communications Commission is working with major cell service providers to allow people in affected regions to use any available roaming services in the state.

In addition, the White House asked Congress to approve $6.4 billion to resettle, transport, process, and give health screenings to the thousands of Afghan refugees pouring out of the country as the Taliban terrorist group takes full control.

According to numbers provided by the Pentagon and the Department of Homeland Security, on Wednesday the United States took more than 65,000 Afghans out of the country during the evacuation effort at the Kabul airport.

Of those, over 24,000 have arrived in the United States since the middle of August, while 23,000 more were brought to U.S. military bases in Europe; 20,000 more are in Asia. Many of these are expected to eventually make it to the United States. Alejandro Mayorkas, Secretary of the Department of Homeland Security, has said that the United States plans to take in 50,000 Afghan refugees at a minimum.

The Biden administration launched in July “Operation Allies Refuge,” a program designed to evacuate Afghan helpers, who have been issued a Special Immigrant Visa (SIV) in recognition of their service.

In addition to those helpers who have applied for Special Immigrant Visas, the U.S. Committee for Refugees and Immigrants says that there are “hundreds of thousands” of Afghans seeking to escape Taliban rule.

In addition, White House press secretary Jen Psaki has said that Afghan refugees are being tested for COVID-19, the disease caused by the CCP (Chinese Communist Party) virus. Beyond this, she said that the administration is “working through offering [COVID-19] vaccines and what that process will look like.”