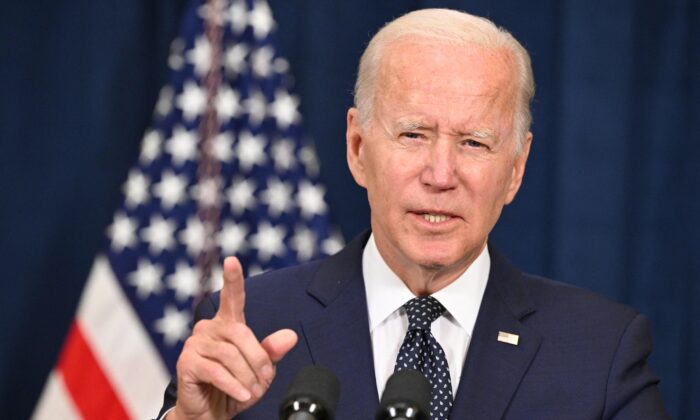 President Joe Biden speaks to the press after taking part in a working session with Saudi Arabia's crown prince at the Al-Salam Palace in Jeddah, on July 15, 2022. (Mandel Ngan/AFP via Getty Images)
FBI Raids Trump Resort

The Biden administration, months before the Mar-a-Lago raid, asked the federal agency in charge of keeping the nation’s records to let the FBI pore over documents from former President Donald Trump’s home, a newly disclosed letter shows.

“On April 11, 2022, the White House Counsel’s Office—affirming a request from the Department of Justice supported by an FBI letterhead memorandum—formally transmitted a request that NARA provide the FBI access to the 15 boxes for its review within seven days, with the possibility that the FBI might request copies of specific documents following its review of the boxes,” Wall said in the letter, which was first published by Just the News. NARA released a copy on Aug. 23.

The boxes were transferred to NARA in mid-January from Mar-a-Lago, Trump’s Florida resort, after months of negotiations, NARA has said. David Ferriero, the archivist until May, previously told a House of Representatives panel that the boxes contained classified documents, although Trump has maintained he declassified the materials and cooperated with NARA.

Among the materials, according to Wall’s letter: over 100 documents, or more than 700 pages, with classification markings, including some with the highest levels of classification.

The Justice Department’s (DOJ) National Security Division informed Corcoran on April 29 that it had opened a criminal investigation, according to the letter, and that it sought access to the materials for the probe.

Trump’s lawyers asked for and received an extension of the production date, and NARA didn’t immediately give the FBI access to the materials. Corcoran, meanwhile, informed Wall that counsel needed more time to review the materials to see whether any were subject to Trump’s executive privilege, and that the letter should be considered “a protective assertion of executive privilege made by counsel for the former President.”

Presented with the claims, Biden deferred to Wall’s determination, the acting archivist said. Wall then asked for the DOJ’s advice. Christopher Schroeder, an assistant attorney general appointed by President Joe Biden, said that it was unprecedented for a former president to assert executive privilege “against an incumbent President to prevent the latter from obtaining from NARA Presidential records belonging to the Federal Government where ‘such records contain information that is needed for the conduct of current business of the incumbent President’s office and that is not otherwise available,'” Wall said, citing U.S. code.

She opted to reject Trump’s claim, and said NARA would provide the FBI access to the records starting as soon as May 12—two days after the letter was sent.

The DOJ, the White House, and Corcoran didn’t respond to requests for comment.

The White House has said it was not aware of the raid before it took place.

Trump said on Truth Social that the letter and other newly disclosed documents show the White House had knowledge of the investigation.

The documents “reveal they knew everything, in fact led the charge – a political NO, NO!” he said.

Within three months, the FBI had asked for and received a search warrant for Mar-a-Lago, and raided the residence on Aug. 8. Agents removed boxes of materials and other items, including some listed as classified. Unsealed warrant documents showed the government believes Trump violated several laws, including on related to handling defense materials.

The warrant affidavit remains sealed, and Trump has asked for an independent party to be appointed to sift through the seized materials and separate privileged items.