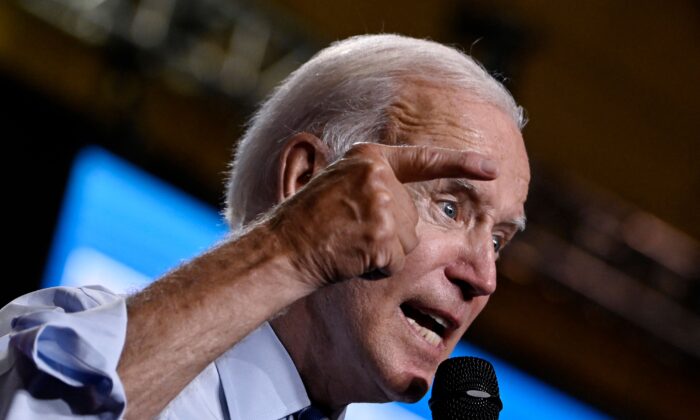 A new report by the Committee for a Responsible Federal Budget (CRFB) estimates that the policies the Biden administration has implemented through executive actions and legislative efforts will add about $4.8 trillion to deficits between 2021 and 2023.

Even if the American Rescue Plan (ARP) were removed from the equation, the White House would still have contributed approximately $2.5 trillion to deficits until 2031, the organization stated.

“This is on top of the trillions of dollars we were projected to borrow before President Biden took office,” the CRFB noted in its report on Sept.13.

The $4.8 trillion consists of $4.6 trillion of new spending, which includes $3 trillion from legislation and $1.1 trillion from executive edicts. Some of the specific policies that have exacerbated the federal government’s fiscal challenges were the fiscal year 2022 Omnibus Bill ($625 billion), the Infrastructure Investment and Jobs Act of 2021 ($370 billion), Ukraine supplemental appropriations bills ($55 billion), and net interest ($700 billion).

While this figure is lower than former President Donald Trump’s $7.5 trillion, it’s higher than the $2.5 trillion Trump had enacted at this stage in his term.

“Excessive borrowing will lead to continued inflationary pressures, drive the national debt to a new record as soon as 2030, and triple federal interest payments over the next decade—or even sooner if interest rates go up faster or by more than expected,” the budget watchdog noted.

The Federal Reserve has confirmed that it will keep raising interest rates and keep the federal funds rate higher for longer until it reins in inflation. When it released its fiscal year 2022 budget (pdf), the White House was criticized for offering lower interest-rate projections for the next few years, despite the central bank on the path toward tightening.

Maya MacGuineas, president of the CRFB, recently opined in The Washington Post that “the administration is congratulating itself” for temporary COVID-related fiscal measures expiring and, as a result, cutting all-time high deficits.

In May, the Congressional Budget Office (CBO) released its Budget and Economic Outlook, which found that the budget shortfall will average $1.6 trillion per year from 2023 to 2032. By the end of decade-long year window, the deficit will account for 6.1 percent of the gross domestic product (GDP), which has happened only six times since the end of World War II.

Federal spending is expected to average 23 percent of GDP during this span, which will be “boosted by rising interest costs and greater spending for programs that provide benefits to elderly people.” While revenues are projected to represent a greater share of GDP in 2022, they are predicted “to decline over the following few years, but remain above their long-term average through 2032.”

Washington’s finances could have been much “worse” if the president’s signature Build Back Better plan had been approved, says David Ditch, a policy analyst in the Grover M. Hermann Center for the Federal Budget at The Heritage Foundation.

“Despite the false spin from leading Democrats, it would have led to significantly higher deficits over the first several years (at minimum), pouring more gasoline on the inflationary fire,” he said in response to the CBO’s projections.

“Biden’s budget plan is similarly bankrupt, with more inflationary spending, anti-growth tax hikes, and radical, left-wing policy goals. It’s clear that the administration isn’t even considering the idea that now is the time to rein in out-of-control spending.”

Even if the long-term outlook were dismissed, the national debt continues to be a worrisome challenge for the U.S. government, Ditch added.

In total, the national debt is more than $31 trillion. The federal debt as a percentage of GDP is around 122 percent. Unless significant fiscal action is taken, the debt-to-GDP ratio could soar to 185 percent in the next 30 years, a separate CBO report stated.

US Deficit Widened in August

New data (pdf) from the Treasury Department highlighted that the U.S. government recorded a $220 billion budget deficit in August, up 29 percent from the same time a year ago.

The U.S. administration recently projected that this year’s budget deficit would be about $400 billion lower than its previous estimate in March.

From higher-than-expected federal revenues and a decline in spending, the budget shortfall is forecast to be $1.03 trillion in the fiscal year ending Sept. 30, according to the Office of Management and Budget (OMB).

“The president’s top economic priority continues to be tackling the challenge of inflation, without giving up the historic economic gains we’ve made over the past 18 months,” OMB Director Shalanda Young said in a statement last month. “While costs are still too high for too many families, the president’s economic plan is working and we’re on the right track.”

In recent months, President Joe Biden has repeatedly claimed that his policies have helped reduce the budget deficit.