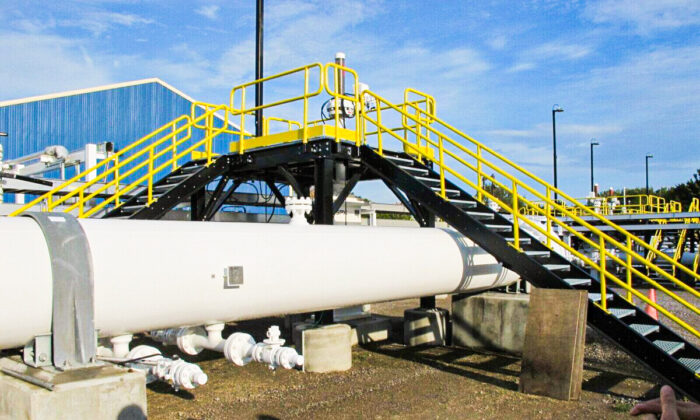 An above-ground section of Line 5 at Enbridge's Mackinaw City pump station in Michigan. The state of Michigan has told Enbridge it must shut down the pipeline by May 12. (AP Photo/John Flesher)
By Jack Phillips

When pressed by a reporter during a news conference, White House deputy press secretary Karine Jean-Pierre disputed reports saying President Joe Biden was going to terminate Enbridge Inc.’s Line 5 pipeline, which stretches from Canada into Michigan. However, she conceded that the Army Corps of Engineers was reviewing the matter.

“Yes, we are. We are,” Jean-Pierre said. “I thought you were saying that we were going to shut it down, but that is not inaccurate. The Army Corps of Engineers is preparing an environmental impact [statement] to look through this.

“Any reporting indicating that some decision has been made, again, is not accurate,” she said, adding that an environmental impact statement “will help inform any additional action or position the U.S. will be taking on the replacement of Line 5.”

Line 5 is part of a pipeline network that moves crude oil and other petroleum-based products from Canada, transporting some 500,000 barrels per day.

On Nov. 7, Politico reported that the administration was weighing the potential market effects of a shutdown of the pipeline in the face of Republican, Canadian government, and industry opposition. More than a dozen GOP lawmakers last week sent a letter to President Joe Biden, warning that the move would further cause gas prices to increase amid already-high prices.

Michigan Gov. Gretchen Whitmer, a Democrat, has also sought to shut down one segment of the pipeline, ordering Enbridge to stop operations in May due to concerns about a section that runs under the Straits of Mackinac leaking into the Great Lakes.

But in October, the Canadian government, which backs Enbridge and Line 5, escalated the dispute and invoked a decades-old Canada–U.S. treaty.

Last week, the Biden administration received a letter from Michigan’s 12 federally recognized Native American tribes, urging the president to back Whitmer’s effort to shut down the line.

“We view Line 5 as an existential threat to our treaty-protected rights, resources, and fundamental way of life as Anishinaabe people of the Great Lakes,” their letter said, according to the Detroit Metro Times.

Around the same time, Rep. Bob Latta (R-Ohio) and 12 other members of Congress sent a letter to the White House, warning that closing the pipeline would further trigger spikes in energy prices.

“As we enter the winter months and temperatures drop across the Midwest, the termination of Line 5 will undoubtedly further exacerbate shortages and price increases in home heating fuels like natural gas and propane, at a time when Americans are already facing rapidly rising energy prices, steep home-heating costs, global supply shortages, and skyrocketing gas prices,” Latta wrote.

Meanwhile, Jean-Pierre’s comment comes as Energy Secretary Jennifer Granholm, a former Democratic governor of Michigan, told CNN on Nov. 7 that winter energy prices would increase for most Americans. “It will be more expensive this year than last year,” she said.

The federal Energy Information Administration released a report in October stating that U.S. households that rely on natural gas to heat and power their homes could spend an average of $746 to heat their homes this winter, which is an increase of 30 percent from the previous winter. Gasoline prices, meanwhile, have continued to surge, with AAA data showing the average price of a gallon of regular gas rising to a seven-year high of $3.422.

Earlier this year, Biden signed an executive order suspending construction of the Keystone XL pipeline that would have transported crude oil to the interior United States from Alberta, Canada. That move also drew pushback from the Canadian government.