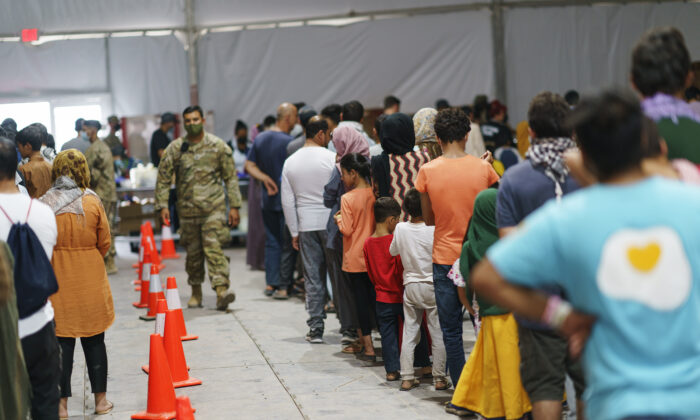 The Biden administration said on Monday it will double the refugee admissions cap to 125,000 in fiscal year 2022 from the current cap of 62,500.

Fiscal Year 2022 begins on Oct. 1. The State Department announced that it has sent a report to the House and Senate Judiciary Committees that recommends the refugee cap increase “to address needs generated by humanitarian crises around the globe.”

The report is produced by the Departments of State, Homeland Security, and Health and Human Services. It said the Biden administration seeks to rebuild the U.S. Refugee Admissions Program (USRAP) through “strengthening its global infrastructure to welcome significantly greater numbers of refugees” as well as making the program responsive to future changes.

In particular, the new admissions target plans to focus on certain populations and programs, including: “expanded resettlement of Central Americans; enhanced access to the USRAP for Afghans at risk due to their affiliation with the United States; increased resettlement of LGBTQI+ refugees; priority access for at-risk Uyghurs, Hong Kong refugees, and Burmese dissidents; and resettlement of Burmese Rohingya.”

Former President Donald Trump had set a refugee cap of 15,000 before the Biden administration more than quadrupled that figure in May. Biden said at the time that Trump’s cap “did not reflect America’s values as a nation that welcomes and supports refugees.”

The Biden administration said in its report that it expects arrivals in the current fiscal year to “fall far short” of the 62,500 target. In FY 2021, 7,637 asylum seekers were found to meet the criteria for being admitted as a refugee into the country as of the end of August. The administration said it “will redouble efforts in FY 2022 … to meet the longer-term global objectives.”

State Department spokesperson Ned Price said in a statement that the latest move “is reaffirming our commitment to refugee resettlement in line with our long tradition of providing a safe haven and opportunity to individuals fleeing persecution.”

“With the world facing unprecedented global displacement and humanitarian needs, the United States is committed to leading efforts to provide protection and promote durable solutions to humanitarian crises, to include providing resettlement for the most vulnerable,” the statement reads.

“A robust refugee admissions program is critical to U.S. foreign policy interests and national security objectives, and is a reflection of core American values,” Price said in the statement. “The United States has long been a global leader in refugee resettlement.”

Some members of Congress have voiced their support for the administration over the measure.

“We are greatly encouraged by President Biden’s announcement today affirming his commitment to admit up to 125,000 refugees in the coming fiscal year and to rebuild the U.S. Refugee Admissions Program,” House Judiciary Committee Chair Jerrold Nadler (D-N.Y.) and subcommittee on Immigration and Citizenship Chair Zoe Lofgren (D-Calif.) said in a statement. “As multiple humanitarian crises continue to unfold around the world, the President’s action could not come at a more important time.”

They added, “We look forward to working with the Biden Administration to restore this life saving program and our reputation as a leader in providing refuge to those fleeing persecution around the globe.”

Senate Majority Whip Dick Durbin (D-Ill.) also praised the Biden administration, saying he had been advocating for the high refugee cap since April.

“Facing the greatest refugee crisis in our time, I know the Biden Administration is working to restore the United States’ longstanding bipartisan tradition of providing safety to the world’s most vulnerable refugees—including Afghan refugees,” Durbin said on Twitter.

Meanwhile, communities facing the border crisis at the south are grappling with the worst border numbers in history, driven by Biden’s policies that have, so far, allowed a large portion of illegal immigrants to stay in the United States.

However, the “rather sudden” surge of immigrants has prompted a large-scale response from the federal government, including moving some 6,500 immigrants from Del Rio to other parts of the border to ease the burden on the overtaxed agents.

In recent weeks, thousands of illegal immigrants have amassed near the Texas border but are now leaving the United States, returning to Mexico to pick up supplies or to avoid being deported back to their home countries.

BREAKING: Haitians and others flooding back across the border to Acuna, Mexico, from under the international bridge in Del Rio.

Grabbing taxis, walking, anything to get across somewhere else and avoid deportation from the US. pic.twitter.com/1WlYYKCA56

Haitians and others were witnessed on Sept. 20 crossing the Rio Grande to enter Acuña, Mexico, preempting a U.S. crackdown on an illegal immigrant camp under the International Bridge at Del Rio.