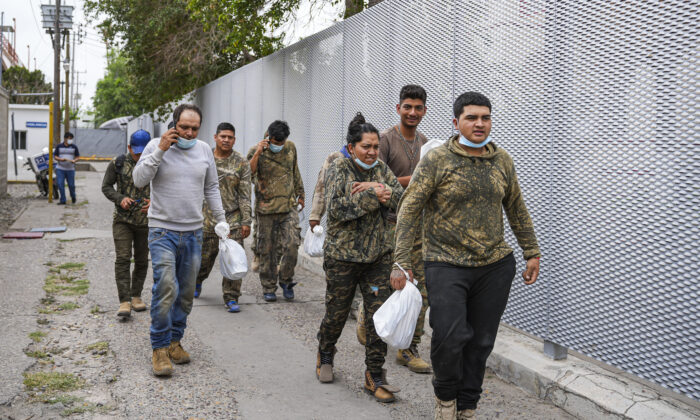 A group of Mexicans walk back into Mexico after being returned halfway along the international bridge from the United States under Title 42, in Piedras Negras, Mexico, on April 21, 2022. (Charlotte Cuthbertson/The Epoch Times)
By Caden Pearson

The Biden administration said on Wednesday it’s appealing a federal judge’s ruling that forbids the government from deporting some illegal immigrants at the U.S.-Mexico border without first providing them the option to request asylum under the Title 42 policy.

In a court filing, the U.S. Department of Homeland Security (DHS) said it planned to appeal the November verdict by U.S. District Court Judge Emmet Sullivan, an appointee of former President Bill Clinton, that overturned the Title 42 policy.

The Title 42 policy was implemented by the U.S. Centers for Disease Control and Prevention (CDC) in March 2020, during the administration of then-President Donald Trump, allowing border agents to quickly deport illegal immigrants during the COVID-19 pandemic.

The CDC maintained the policy under President Joe Biden.

On Nov. 15, Sullivan ruled that the Biden administration end the Title 42 policy effective immediately (pdf). He later granted a stay on his order for five weeks, making the new deadline Dec. 21.

In his Nov. 15 order, Sullivan wrote that the policy “failed to adequately consider alternatives and the policy did not rationally serve its stated purpose.” The judge further stated that the CDC’s “decision to ignore the harm” that the policy may create was “arbitrary and capricious” and violated the Administrative Procedure Act (APA).

“It is unreasonable for the CDC to assume that it can ignore the consequences of any actions it chooses to take in the pursuit of fulfilling its goals, particularly when those actions included the extraordinary decision to suspend the codified procedural and substantive rights of noncitizens seeking safe harbor,” Sullivan wrote in his opinion.

The Biden administration said in its filing that it would argue on appeal that the CDC’s Title 42 policy was lawful and that “this Court erred in vacating those agency actions (pdf).”

The CDC attempted to terminate the policy in May, but the action was halted by a federal judge in Louisiana who ruled in favor of Republican-led plaintiff states that had sought an injunction to keep the policy in place amid the border crisis.

In that Louisiana ruling, Judge Robert Summerhays, a Trump appointee, said the CDC’s move to terminate the policy didn’t comply with the APA that required public notice and time to gather public comment on the plan.

In granting the injunction, Summerhays cited the impact that terminating the Title 42 policy would have on the plaintiff states.

Before the CDC announced its move to terminate the Title 42 order in May, then-White House communications director Kate Bedingfield stated that repealing Title 42 would result in an “influx of people to the border.”

The CDC decision sparked a lawsuit on April 4 by 24 states, led by the attorneys general of Arizona, Louisiana, and Missouri, seeking an injunction to keep the policy in place. The states argued, in part, that repealing the Title 42 policy would “induce a considerable rise in illegal immigration into the United States, with many migrants asserting non-meritorious asylum claims.”

DHS Secretary Alejandro Mayorkas, named as a defendant in the appeal, has previously stated that the government was preparing for a possible flood of U.S.-bound immigrants at the southern border, estimating that there may be up to 18,000 migrants per day if Title 42 is repealed.

In its court filing, the Biden administration notified the Washington, D.C., court that the Department of Health and Human Services and the CDC have chosen to conduct a new rulemaking to review the framework within which the CDC director may exercise her authority under Title 42 to respond to dangers posed by future communicable diseases.

The outcome of that rulemaking may render the issues underpinning the Louisiana case moot “to the extent they would even have standing to challenge the regulation alone, if the Title 42 Orders primarily at issue were terminated,” according to the court filing.

The Title 42 policy was implemented by the CDC in response to the possibility of illegal immigrants introducing COVID-19 into the country. The Biden administration reduced the order by exempting unaccompanied minors, then attempted to repeal it entirely, but Summerhays halted that move.

In the fiscal year 2022, U.S. Border Patrol expelled around 1 million illegal aliens under Title 42, compared to 1.1 million under Title 8, a federal legislation that allows for the deportation of illegal immigrants who do not qualify for asylum.

The U.N. and other Democrats have previously stated that Title 42 expulsions endanger vulnerable migrants and are not founded on science. A separate court order prevents the Biden administration from deporting families to countries where they may face persecution or torture.