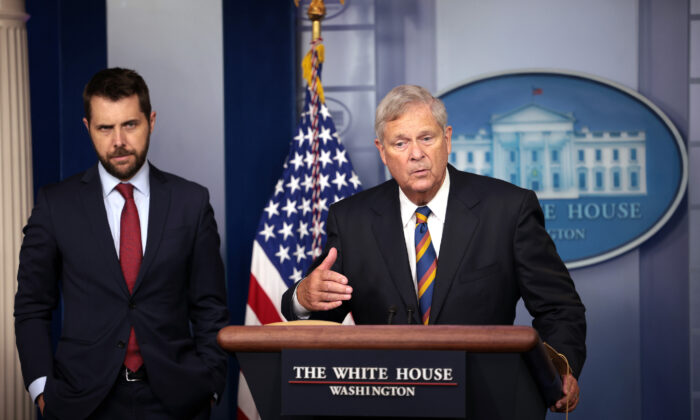 The Biden Administration is pointing to corporate consolidation as the reason for the rising costs Americans are paying for food, but Tyson Foods, the nation’s largest meat processing company, says it rejects this assessment.

A report released by the White House on Wednesday said that about half of the added expenses that consumers have paid at the checkout aisle over the past few months can be attributed to three meats: beef, pork, and poultry. According to the report, prices for beef have risen by 14.0 percent, pork by 12.1 percent, and poultry by 6.6 percent since last December.

It goes on to say that there is a processing bottleneck in the supply chain of these meats, dominated by four companies that own between 55 and 85 percent of the market. It says those companies have seen record profits in the first half of this year while wholesale prices paid to farmers have remained largely flat.

“It raises concern about pandemic profiteering,” said director of the National Economic Council, Brian Deese, who coauthored the report. “Companies that are driving price increases in a way that hurts consumers who are going to the grocery store, but also isn’t benefitting the actual producers, the farmers and the ranchers that are actually growing the product.”

Tyson issued a press release in response saying that it “categorically rejects” Deese’s assessment, attributing the increase in the price of beef, in particular, to “unprecedented market conditions,” pointing to increased costs for staffing and supply chain challenges spurred on by the pandemic, as well as severe weather conditions.

Earlier this year, Tyson agreed to pay more than $200 million to settle a class-action suit that alleged price-fixing among chicken producers.

“It’s not something we’re dreaming up here,” Secretary of Agriculture Tom Vilsack said. “The profits are real—the fact that producers are not making a profit.”

Vilsack said many farmers are losing money on their livestock and most, 89.6 percent, do not make the majority of their income from farming. He proposes strengthening the regulatory system, providing more transparency on the prices paid to farmers and offering $500 million in federal aid meant to increase the processing capacity of smaller food processors.

He also says the agriculture department is expanding its Emergency Livestock Assistance Program (ELAP) to include assistance foe transportation expenses, focusing on farms in areas that have dealt with serious drought.

President Joe Biden signed an Executive Order on Promoting Competition in the American Economy in July that directs the Department of Justice (DOJ) to look into price gouging and other forms of market manipulation. Deese says any legal action will be left to the appropriate enforcement agencies.