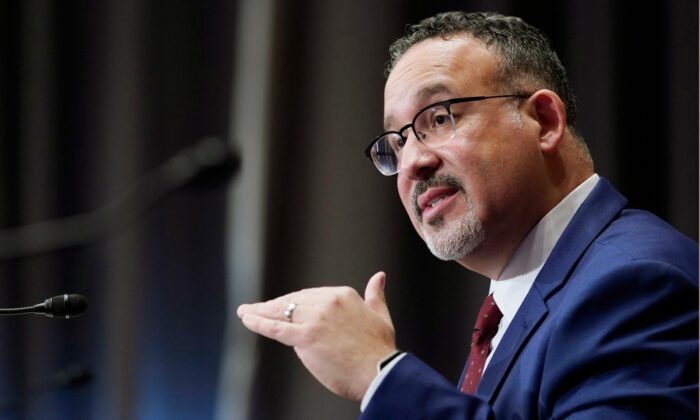 Secretary of Education Miguel Cardona testifies during his confirmation hearing before the Senate Education and Labor Committee on Feb. 3, 2021. (Susan Walsh/Pool/Getty Images)
US News

In a reversal of a Trump-era policy over the distribution of federal grants supporting college students during the pandemic, the U.S. Department of Education announced Tuesday that illegal immigrants and international students will also receive the relief checks.

Those students, along with refugees and Deferred Action for Childhood Arrival (DACA) recipients, are now able to tap into the $36 billion Higher Education Emergency Relief Fund (HEERF), which was allocated by Congress last year as part of the CARES Act.

“With this action, thousands of institutions will be able to provide direct relief to students who need it most, so we can make sure that we not only recover from the pandemic, but also build back even stronger than before,” said Education Secretary Miguel Cardona in a press release.

Those students had been blocked from the CARES Act relief money since April 2020, when then-Education Secretary Betsy DeVos issued guidelines on which students can receive the aid. While Congress didn’t explicitly state in the legislation to bar certain students from getting those grants, the guidelines said that the grants are only available to students who are also eligible for Federal Student Aid (FAFSA) under the Title IV of the Higher Education Act.

FASFA is only available to U.S. citizens and permanent residents, with very few exceptions, meaning that under DeVos’s guidelines, CARES Act grants could not to be awarded to illegal immigrants or international students.

“It’s clear the CARES Act was written to help Americans recover from the coronavirus pandemic,” DeVos said in June 2020. “U.S. taxpayers have long supported U.S. students pursuing higher education, and this rule simply ensures the continuity of that well-established policy.”

Cardona’s new HEERF guidelines, however, removed the Title IV requirement. It says that students are eligible for HEERF grants regardless of whether they have applied for FAFSA or their Title IV status, as long as they are or were enrolled in college during the COVID-19 national emergency.

“Secretary Cardona’s decision to give free money to illegal immigrants and foreign students is an insult to every American,” Foxx said in a statement. “The law is clear; federal funds are for hardworking citizens.”

“President Biden is fueling an immigration crisis, and this final rule exacerbates the emergency at the southern border. I call on elected Democrats to stop swindling law-abiding citizens, put Americans first, and respect the sacrifice of hardworking taxpayers,” she added.