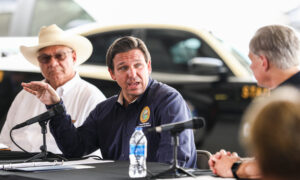 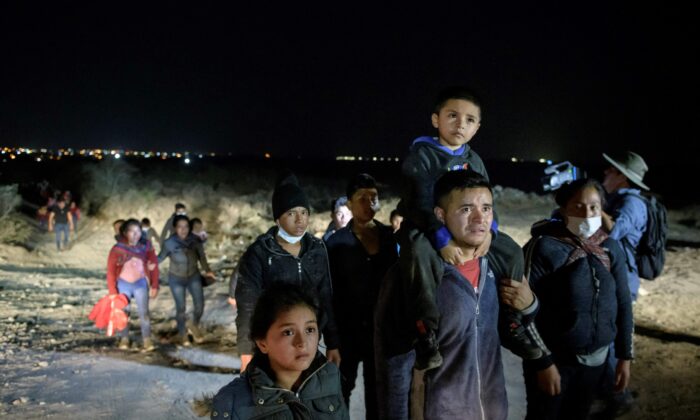 Immigrants who arrived illegally from across the Rio Grande river from Mexico make their way along a track towards a processing checkpoint set up by Border Patrol agents in the border city of Roma, Texas, on March 27, 2021. (Ed Jones/AFP via Getty Images)
Immigration & Border Security

As the Biden administration struggles to process the surging influx of illegal immigrants, the White House on Tuesday revealed a plan to overhaul immigration at the U.S.–Mexico border.

This new plan comes a day after the Biden administration received criticism from immigration advocates for a statement in which the Department of Homeland Security (DHS) said they will speed up deportations of certain family units who try to enter the United States illegally between ports of entry.

Tuesday’s notice from the White House highlights a five-pronged, 21-point plan to address this crisis at the border. The blueprint begins by blaming, in large part, the current immigration crisis on former President Donald Trump’s immigration policies.

“Success in building this fair, orderly, and humane immigration system won’t be achieved overnight, especially after the prior Administration’s irrational and inhumane policies, but this Administration has a blueprint to get there and is making real progress,” a White House fact sheet says.

There has been mounting pressure from Republicans and border communities for the administration to stop the influx of these migrants. Senator Ted Cruz (R-Texas) said that the Biden administration’s policies created the immigration crisis at the southern border.

“Three decisions made in the opening week of this administration caused this crisis. Number one, the first week in office Joe Biden immediately halted construction of the border wall. Number two, he reinstated the failed policy of catch and release. And number three, most indefensibly, he ended the incredibly successful ‘remain in Mexico’ international agreement,” Cruz said during a Senate Judiciary Committee hearing in July.

The White House said, despite the Trump-era policies, they will implement a new plan that outlines the steps federal agencies will be taking to continue implementing President Joe Biden’s “transformative vision for a 21st-century immigration system” to secure the border.

The administration’s immigration blueprint comes after Biden spoke Monday to the nation’s largest Latino advocacy organization, UnidosUS, via prerecorded remarks. Biden promised to secure a pathway to citizenship for undocumented Americans. “My administration will always have your back,” Biden said.

The immigration overhaul has five goals, the first being a humane and well-managed southern border. To achieve this, the administration will take funding from the border wall to beef up technology and ports of entry. DHS will also expedite the removal of families that do not qualify for asylum, work with regional partners to stop human trafficking and drug smugglers, and send a clear message to migrants about U.S. immigration rules.

The second part of their strategy to secure the border is to streamline the asylum process by appointing more judges to listen to asylum claims and rescinding Trump-era policies to establish “clear and just eligibility standards that harmonize the U.S. approach with international standards.” They will also pump $15 million to pay for pro bono legal fees for asylum seekers and $23 million to go to the Department of Justice to process claims.

The third part of the Biden plan is to give humanitarian aid to countries, specifically in the Northern Triangle. The Biden administration will work with the U.N. to donate “$255 million in assistance to meet immediate and urgent humanitarian needs for people in El Salvador, Guatemala, and Honduras, refugees, other displaced people, and vulnerable migrants in the region.”

As a second part of addressing the humanitarian crisis in the Northern Triangle, the U.S. government will also set up programs to process asylum cases in the migrants’ home countries.

The Biden administration will also invest in Central America in an effort to address the root causes of mass migration to the United States. The Biden administration will work with large corporations to enhance “workforce development, health, and education; and build resilience to climate change and food insecurity so individuals can find an economic opportunity at home.”

The plan will also address corruption that impedes democratic governance, free press issues, labor rights, and gender issues in the Northern Triangle in an effort to have the United States achieve a more secure southern border.

The administration is also calling on Congress to pass two pieces of legislation through a partisan vote if need be. The U.S. Citizenship Act (H.R. 1177/S. 348) and the Dream and Promise Act (H.R. 6) and Farm Workforce Modernization Act (H.R. 1603) would create a pathway to citizenship for those illegal immigrants that are already living and working in the United States.