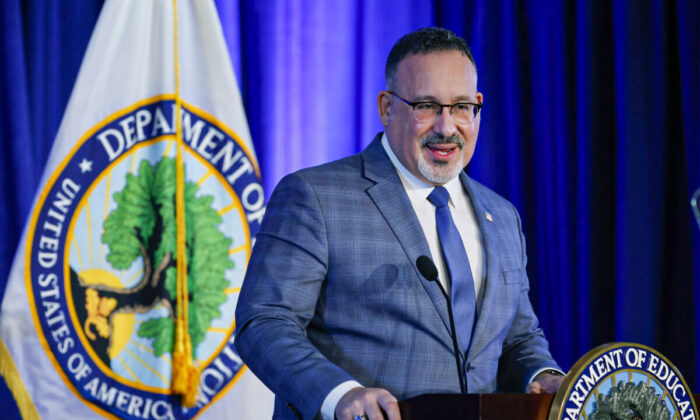 Amid nationwide calls for giving parents more choices in their children’s education, the Biden administration has quietly proposed changes that critics say will make it harder for new public charter schools to open and for existing ones to survive.

On March 14, the U.S. Department of Education released a 14-page regulatory proposal regarding the priorities, requirements, and criteria that public charters should meet when they apply for federal funds.

The department argued the changes are to “create results-driven policies” to help “promote promising practices and accountability,” and are expected to serve as a model for state regulations.

Under the proposed new rules, which have been given an unusually short public comment period of one month lasting until April 13, public charters would have to “collaborate with at least one traditional public school” in order to be prioritized for federal funding. Specifically, a charter seeking federal money must provide a letter signed by the public school it collaborates with, as well as a plan detailing resources it is willing to contribute to the partnership, including curriculum materials, educator development opportunities, and transportation.

Many commenters argue that forcing such collaborations as a contingency of funding potential will create unwarranted burden for charters, particularly those that are built in a way district school administrators oppose. Some noted that, given the history of traditional school antagonism towards charters, the inclusion of this priority is more likely to hinder than advance further charter school development.

In addition, those who plan to open new charters must prepare a “community impact analysis” that demonstrates their commitment to social justice, especially in combating so-called re-segregation in public schools, which the progressives have been blaming on school choice programs.

In reality, many charters serve predominately black and Hispanic communities and don’t prioritize racial diversity in their enrollment or hiring models. The proposal states that they still need to provide a community impact analysis when applying for federal grants.

As for charter schools contracting for-profit education management organizations (EMOs) for services, the new rules would make them ineligible to apply for federal grant money, although it’s not rare for public schools to contract basic services from for-profit EMOs.

A total of 702 charter schools servicing nearly 450,000 students are operated by EMOs, according to pro-charter advocacy group National Alliance for Public Charter Schools.

“Both charter schools and traditional districts contract with EMOs,” the Alliance says on its website. “Many EMOs serve as vendors for specific management-related services, such as back-office support, hosting web platforms, or staffing assistance.”

Charter school proponents see the new proposal as a political move to appease powerful teachers unions at the expense of families that could have benefited from more education options. The American Federation of Teachers and the National Education Association, the two largest teachers’ unions, are traditionally considered bastions of Democrats and endorsed President Joe Biden in the 2020 presidential election.

“It’s outrageous that Washington would target charter schools in this way—particularly when more families than ever are turning to charter schools,” the Alliance said in a statement. “It’s not okay to play politics with our children or our schools. New policies should put kids first, not systems.”