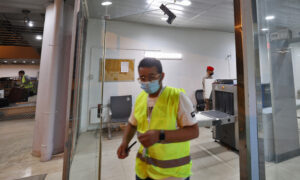 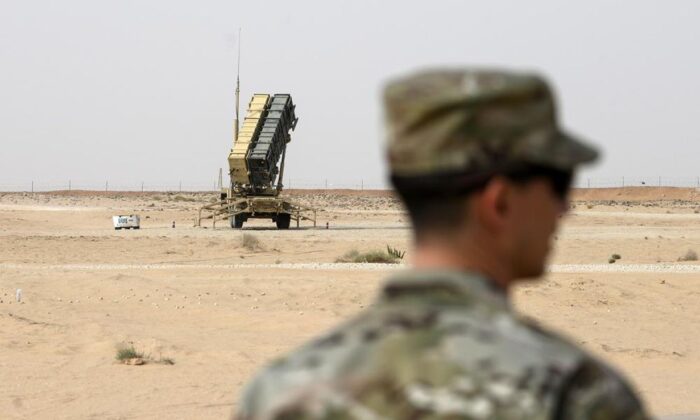 A member of the U.S. Air Force stands near a Patriot missile battery at Prince Sultan Air Base in Saudi Arabia on Feb. 20, 2020. (Andrew Caballero-Reynolds/Pool via AP, File)
Middle East

Satellite photos show that the United States has removed a significant number of its advanced missile defense systems and Patriot missile batteries from Saudi Arabia in recent days.

Photos that were obtained and published by The Associated Press (AP) show that the Prince Sultan Air Base previously had on site a Terminal High Altitude Area Defense (THAAD) unit, another missile defense system, and Patriot missiles provided by the United States. But those batteries are no longer at the base, according to satellite photos taken in late August and reviewed by the AP.

“The Defense Department continues to maintain tens of thousands of forces and a robust force posture in the Middle East, representing some of our most advanced air power and maritime capabilities, in support of U.S. national interests and our regional partnerships,” Pentagon spokesman John Kirby told the AP regarding the move.

Representatives of the Pentagon didn’t respond to requests for comment by press time.

Over the past several years, amid Saudi incursions in nearby Yemen, the country’s Houthi rebels have fired missiles and carried out drone strikes against Saudi assets. The United States deployed two Patriot missile systems in 2019, following attacks on Saudi oil production sites as Washington blamed Iran for the strikes. Tehran has denied the allegations.

Officials in the kingdom said on Sept. 5 that it intercepted a ballistic missile fired by Houthi rebels near the Dammam, Saudi Arabia, according to news reports.

Amid the missile defense pullout, Saudi Prince Turki Al-Faisal said in a recent interview that he wants Washington to show it’s committed to the kingdom, urging the Americans to leave the defense systems in the country.

“I think we need to be reassured about American commitment,” Al-Faisal, Saudi Arabia’s former intelligence chief, told CNBC. “That looks like, for example, not withdrawing Patriot missiles from Saudi Arabia at a time when Saudi Arabia is the victim of missile attacks and drone attacks—not just from Yemen, but from Iran.”

As the United States pulled out of Afghanistan after a decades-long military occupation, questions were raised about whether the Biden administration would be able to fully protect U.S. allies and interests around the world. The Afghan government collapsed in just less than two weeks to the Taliban, leading the United States to carry out a chaotic evacuation that was punctuated by a terrorist attack that killed 13 service members in late August.

Defense Secretary Lloyd Austin has traveled to several Middle Eastern countries in recent days, but a scheduled trip to Saudi Arabia was scrapped due to an alleged scheduling problem. It’s not clear if he’ll return to the kingdom in the near future.