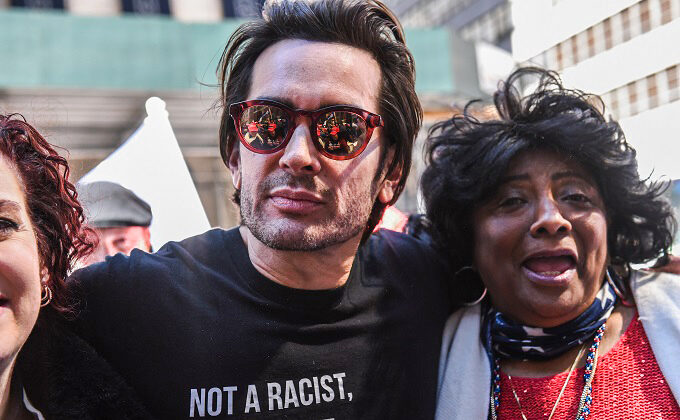 Brandon Straka, founder of the “WalkAway Campaign” and a self-described “former liberal,” was wrongfully painted by the Biden administration as an “extremist” and as an instigator of violence during the Jan. 6 breach of the U.S. Capitol, his attorney said.

“The government has presented a very aggressive narrative and is trying to paint all the Jan. 6 protesters as insurrectionists and violent rioters. This is the picture they painted,” Straka’s attorney, Bilal Essayli, told The Epoch Times in an exclusive interview on Jan. 25.

Straka, 45, of Nebraska, was sentenced on Jan. 24 for disorderly conduct surrounding his participation in the breach of the U.S. Capitol building on Jan. 6 last year. He received three months of home detention, a $5,000 fine, and three years of probation.

U.S. District Judge Dabney Friedrich accused Straka of abusing his online platform to encourage people to attack on Jan. 6 as well as defending the events that unfolded that day, although federal prosecutors had sought to accuse him of more.

Straka, a Democrat-turned-Republican, founded the “WalkAway” movement, which encourages those in today’s Democratic Party to question its “leftist pseudo-liberalism” and “destructive belief system” that divides people into groups based on identity and camps of victims and oppressors. He pleaded guilty in October when dealt the disorderly conduct charge—a misdemeanor with a maximum penalty of six months imprisonment.

In a phone interview, Essayli said that the majority involved in the Jan. 6 breach, like his client, have been charged with crimes such as trespassing, disorderly conduct, or parading—all misdemeanors.

Straka didn’t enter the U.S. Capitol on Jan. 6 but prosecutors attempted to accuse him of doing so. According to the criminal complaint, prosecutors also unsuccessfully sought to charge Straka with impeding a law enforcement officer.

Essayli said his client was painted as an extremist and was wrongfully accused of using his social media presence to promote the breach of the Capitol. He said judge Friedrich used as evidence prior tweets made by Straka criticizing the election results and asking for audits.

“Typical political speech of calling for … this is a civil war. This is common political rhetoric, but it was portrayed and casted as calls to violence and to breach the Capitol,” said Essayli.

“There was no premeditated breach of the Capitol. This was a spontaneous event. Brandon got caught up in the moment, and he was with the crowd, and he probably went somewhere he shouldn’t have been,” he continued.

“But that doesn’t mean that it was orchestrated, that it was premeditated, and that he had this huge plot to breach the Capitol ahead of time–but this is how it was portrayed.”

Friedrich on Jan. 24 said Straka wasn’t being punished for his political views or personal beliefs.

“None of the criminal conduct to which Mr. Straka has admitted is covered by the First Amendment,” the judge said.

Essayli told The Epoch Times that while he agrees with that statement, he has an issue with the government sentencing position, which asked the judge to consider statements outside of what he pleaded guilty to.

“They included tweets from a month prior, they included tweets that happened after the event. This is not conduct he was charged with. He’s charged with disorderly conduct, which is what he did at the Capitol on January 6, but they’re using his statements made before and after the event, to punish him more severely than he ought to. This is the problem,” he explained.

“So she [Friedrich] says things like … the First Amendment doesn’t cover this criminal conduct. We agree with that, but then they shouldn’t be able to use his protected political speech as an aggravating factor to give him a sentence that’s higher than what he should have received.”

Essayli said a large part of the problem has been the framing of Jan. 6 as an insurrection, despite the fact that no one who participated in the breach has been charged as such.

FBI Director Chris Wray testified at an oversight hearing held by the House of Representatives Judiciary Committee in June 2021 that it would be inappropriate to describe the breach as an insurrection.

But Democrat lawmakers have pushed the narrative that the Jan. 6 breach was an “insurrection,” largely during the January impeachment effort against the former president.

“It’s almost like they want to hold all these defendants responsible for the whole thing, for something greater than what it is,” Essayli told The Epoch Times.

He added, “I just wish the government would use the same resources and arguments and laws against groups like Antifa, and BLM, but they don’t. So this is the problem now is we have two standards of justice in our country, and they’re just not treated equally.”

In his first public statement since being sentenced, Straka told his 500,000 followers that he has never advocated for violence.

I have not spoken to my twitter audience in an entire year. Please read my statement below. pic.twitter.com/sSvAHzYlDY

“Please allow me to state again what I have CONSISTENTLY SAID since the night of January 6th, 2021 when I learned of the intense violence that had taken place earlier that day: Violence is NEVER ok. Political violence is never acceptable,” he said.

He also said that he doesn’t believe there was a plot or scheme to initiate violence on Jan. 6, or that one will ever be discovered.

“Like most of you, I’ve employed common sense and come to the conclusion that a very small percentage of people did some very bad things that day, and that this was a spontaneous riot that broke out without planning,” Straka said. “If any evidence of anything else ever comes to light, I will be as shocked as anybody else.”

The Department of Justice said on the one-year anniversary of the Capitol breach that more than 725 people had been arrested so far.