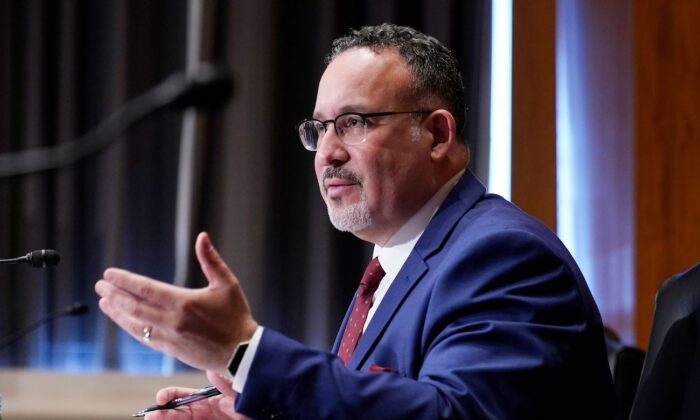 Miguel Cardona speaks during his confirmation hearing to be Secretary of Education, on Capitol Hill in Washington, on Feb. 3, 2021. (Susan Walsh/POOL/AFP via Getty Images)
Education & Family News

The Biden administration said on July 9 that it’s canceling about $55.6 million in student loan debt for 1,800 people who attended three institutions that the Department of Education found had defrauded them.

The eligible borrowers, who attended Westwood College, Marinello Schools of Beauty, and the Court Reporting Institute, will receive 100 percent loan discharges amounting to about $55.6 million in relief, the Department of Education announced.

The latest round of student loan debt relief brings the Biden administration’s total loan cancellation, based on borrower defense, to more than $1.5 billion for nearly 92,000 borrowers.

It’s the first time it has announced approved borrower defense claims for students who attended institutions other than the Corinthian Colleges, ITT Technical Institute, and American Career Institute since 2017, according to the department. The cancellations are being granted under the borrower defense to loan repayment forgiveness rule, a federal regulation that lets student loan borrowers seek debt relief if they’ve been defrauded by their college, university, or career school.

“Today’s announcement continues the U.S. Department of Education’s commitment to standing up for students whose colleges took advantage of them,” Secretary of Education Miguel Cardona said in a statement. “The Department will continue doing its part to review and approve borrower defense claims quickly and fairly so that borrowers receive the relief that they need and deserve. We also hope these approvals serve as a warning to any institution engaging in similar conduct that this type of misrepresentation is unacceptable.”

The bulk of the relief goes to more than 1,600 claims from former students of Westwood College, which closed in 2015 and was found by the Education Department to have “engaged in widespread misrepresentations about the ability of students to transfer credits.”

For Marinello Schools of Beauty, more than 200 claims were approved, amounting to about $2.2 million in relief for former students. The schools with campuses across the country had “made widespread, substantial misrepresentations about the instruction that would be offered” starting from 2009 until their closure in 2016.

“Borrowers regularly asserted that the [Marinello] schools failed to train them about key elements of a cosmetology program, such as how to cut hair,” the department said in its statement. “The Department found that Marinello left students without instructors for weeks or months at a time as part of a pattern of failing to provide the education it promised. As a result, students found it extremely difficult to pass necessary state licensing tests and receive any return on their educational investment.”

Lastly, the department forgave loans of $340,000 for 18 borrowers who attended the Court Reporting Institute, which had from 1998 through its 2006 closure “made widespread, substantial misrepresentations about the time it would take to complete its court reporting program,” the department found.

Previously, in mid-June, the Department of Education announced about $500 million in loan discharges for about 18,000 students who attended ITT Technical Institute. And in March, the department announced it would grant $1 billion in relief to 72,000 borrowers with approved borrower defense claims from Corinthian Colleges and ITT Technical Institute.