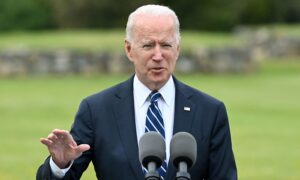 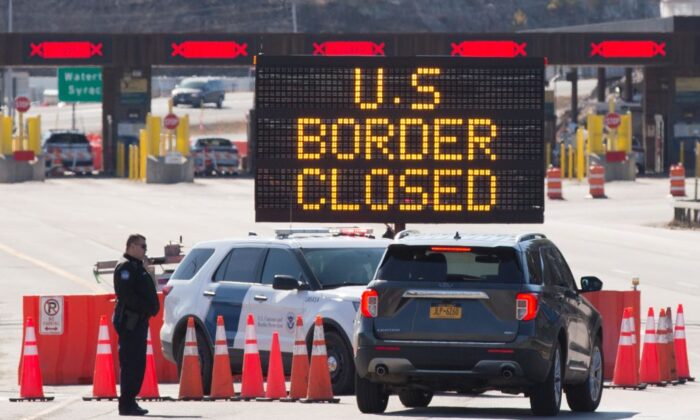 U.S. Customs officers speak with people in a car beside a sign saying that the U.S./Canada border is closed in Lansdowne, Ontario, Canada, on March 22, 2020. (Lars Hagberg/AFP via Getty Images)
Americas

The Department of Homeland Security (DHS) is extending the COVID-19-related restrictions on nonessential travel between the United States, Mexico, and Canada until July 21.

“To reduce the spread of [COVID-19], the United States is extending restrictions on non-essential travel at our land and ferry crossings with Canada and Mexico through July 21, while ensuring access for essential trade & travel,” the department wrote on Twitter on June 20.

The agency, in a separate statement, noted that there have been “positive developments” during talks between the three nations about reopening the borders. The restrictions were first implemented in March 2020 at the start of the CCP (Chinese Communist Party) virus pandemic.

Canadian Prime Minister Justin Trudeau on June 18 noted that border restrictions are causing widespread frustration, but he again announced an extension of the requirements that were set to expire on June 21.

“I get it. It’s frustrating to a whole bunch of people that just want to get back to normal,” he said, adding that he wants 75 percent of Canadians to get vaccinated first before opening the border again. “But it’s really important that we have from the very beginning to keep Canadians safe.”

Some House lawmakers, as well as communities along the U.S.–Canada border that have been hit hard by the pandemic restrictions, have sought to ease the measures ahead of the busy summer travel season.

“The inability of the U.S. and Canadian governments to reach an agreement on alleviating border restrictions … is simply unacceptable,” Reps. Brian Higgins (D-N.Y.) and Bill Huizenga (R-Mich.), co-chairs of the Canada–U.S. Interparliamentary Group, said in a joint statement on June 18.

The lawmakers panned the apparent “lack of transparency surrounding these negotiations” and added that they are “a disservice to our constituents and the millions of residents on both sides of the border waiting to see their loved ones, visit their property, and renew business ties,” according to their statement, noting that the “arrival of vaccines in record time has been a modern marvel.”

“There’s no other way to say it: another month’s delay is [expletive],” the congressman wrote on June 18.

Canada is mostly off-limits to Americans. Casual, tourism, and leisure visits are all prohibited, and exceptions exist for foreign workers, international students, and some family members.

For travelers coming into Canada, there are strict quarantine and testing measures. Such policies have drawn criticism from human rights groups as well as individuals who were forced to be kept inside hotel rooms for weeks and could not leave.

“Our biggest concern may be that the whole thing is premised on distrust. They’re suggesting people won’t properly quarantine at home, and I’m not sure the evidence supports that,” Cara Zwibel of the Canadian Civil Liberties Association said earlier this year amid reports that travelers were being kept in hotels with little food or water for lengthy periods of time, according to TravelPulse.

The United States is also holding working-group meetings on relaxing travel restrictions with the UK and the European Union, but U.S. and airline officials said previously they didn’t expect the Biden administration to lift the restrictions until around July 4 at the earliest.