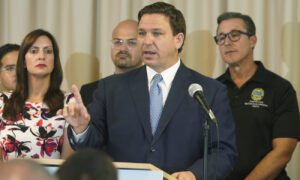 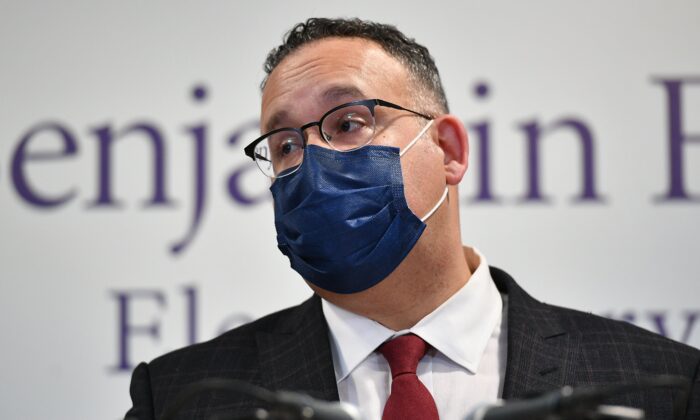 The Biden administration on Thursday began compensating Florida school board members whose salaries were docked for defying Gov. Ron DeSantis’ state ban on mask mandates, the U.S. Department of Education said in a statement.

The department announced in a press release that as part of its Project to Support America’s Families and Educators grant program, it gave almost $148,000 in funding to the School Board of Alachua County—the first board to receive such grants under the scheme.

The grant program was announced by the department recently and provides funding for school districts that lose money for issuing “anti-coronavirus practices,” such as mask mandates.

“The funding will help districts keep these measures in place and maintain district and school stability despite the financial penalty,” Education Secretary Miguel Cardona said in a statement. “With these grants, we’re making sure schools and communities across the country that are committed to safely returning to in-person learning know that we have their backs.”

Cardona in his statement said that he believes the country should be “thanking” districts for “using proven strategies that will keep schools open and safe, not punishing them.”

“We stand with the dedicated educators in Alachua and across the country doing the right thing to protect their school communities,” he added.

Alachua Public Schools thanked Cardona in a statement, saying that its Superintendent Carlee Simon was informed of the funding during a phone call on Thursday.

“I’m very grateful to Mr. Cardona, President Biden, and the federal government for the funding,” Simon said. “But I’m even more grateful for their continued support and encouragement of our efforts to protect students and staff and to keep our schools open for in-person learning.”

Christina Pushaw, a spokesperson for DeSantis, said that just months ago, the Biden administration said that Florida would be violating federal requirements by providing $1,000 bonuses to teachers and principals.

“It’s ironic that the federal government is now using taxpayer funding for education to pay the salaries of elected school board members, who made the decision to violate the law because they don’t believe parents have a right to choose what’s best for their children.”

Jared M. Ochs, the director of communications and external affairs with Florida’s Department of Education, told The Epoch Times that the department will continue to “consider all available legal options within its purview granted by the Florida Constitution and Florida Statutes to ensure each district fully complies with the law.”

“The federal government will not be allowed to circumvent our laws and we will never cede the moral high ground of fighting for the rights of parents to make personal and private health care decisions for their families,” Ochs added.

It comes shortly after the department launched a probe into the state’s restriction against school mask mandates.

Suzanne Goldberg, the acting assistant secretary for civil rights at the U.S. Department of Education, wrote a letter (pdf) to Florida Education Commissioner Richard Corcoran on Sept. 10, saying that the state’s requirement for school districts to allow parents to opt their children out of mask mandates may violate the civil rights of students with disabilities, who are purportedly at a higher risk to adverse outcomes from COVID-19.

The letter said that the department’s Office of Civil Rights (OCR) in Atlanta would carry out the probe.

“OCR’s investigation will focus on whether, in light of this policy, students with disabilities who are at heightened risk for severe illness from COVID-19 are prevented from safely returning to in-person education, in violation of federal law,” Goldberg wrote.

Florida is one of several states where Republican governors have pushed to block local governments and school districts from imposing mask mandates. Critics of mask mandates have argued that such rules infringe on personal liberty, while proponents of the measures have said they are necessary to curb the transmission of COVID-19 nationwide.

According to data compiled by Burbio, masks are currently required at schools in 74 percent of the 200 largest districts around the nation.

Editor’s note: This article has been updated with statements from the Florida’s Department of Education and Gov. DeSantis’ office.