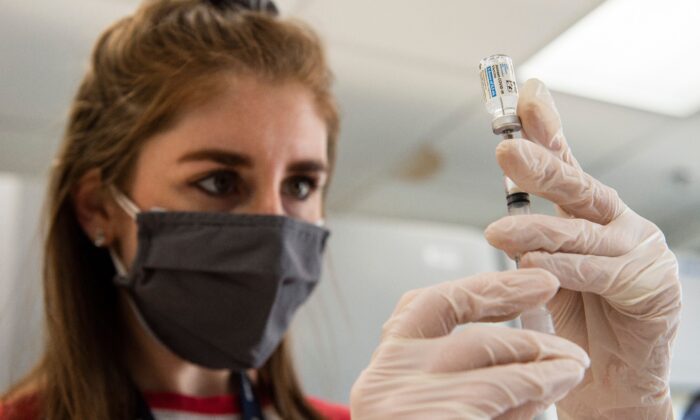 The Department of Justice on Thursday asked the Supreme Court to reinstate its COVID-19 vaccine for healthcare workers after lower courts blocked the mandate from being enforced in certain parts of the country.

The vaccine mandate in question was rolled out by the Centers for Medicare & Medicaid Services (CMS), which conditioned Medicare and Medicaid funding to hospitals and medical facilities on whether or not staff received the vaccine. Under the mandate, all healthcare staff at such facilities have to receive the vaccine and have the option to seek a medical and religious exemption.

The U.S. Circuit Court of Appeals on Dec. 15 issued a series of rulings that essentially left an injunction intact in 24 states, meaning that in about 26 states, the CMS mandate was essentially revived.

The Justice Department, in its application on late Thursday, requested (pdf) the Supreme Court to lift the rulings while the case proceeds. Justice Brett Kavanaugh will rule on the cases due to their geographic location.

“In response to an unprecedented pandemic that has killed 800,000 Americans, the Secretary of Health and Human Services exercised his express statutory authority to protect the health and safety of Medicare and Medicaid patients by requiring healthcare facilities that choose to participate in those programs to ensure that their staff are vaccinated,” the Biden administration’s lawyers said in their appeal.

Their lawsuit now is seeking a stay of the injunctions to “allow the Secretary’s urgently needed health and safety measure to take effect before the winter spike in COVID-19 cases worsens further,” it reads.

Workers at Medicare- and Medicaid-funded sites had until Jan. 4 to provide proof that they received the vaccine under the CMS rule. Several hospitals and healthcare facilities announced they’ve scrapped their vaccine mandates in recent days after CMS said it would postpone enforcement of the mandate.

“There is no question that mandating a vaccine to 10.3 million healthcare workers is something that should be done by Congress, not a government agency,” wrote a judge for the U.S. District Court for the Western District of Louisiana in a ruling that went against the Biden administration in November.

With the latest legal filing, the legal setbacks suggest that the Biden administration is scrambling to continue with its COVID-19 vaccine mandate.

Aside from the CMS mandate, a panel of judges on the U.S. Fifth Circuit Court of Appeals last month struck down the federal Occupational Safety and Health Administration rule that required unvaccinated workers at private businesses with 100 or more employees to submit to weekly testing for the CCP (Chinese Communist Party) virus and wear a mask—or get the vaccine.

Another major Biden policy that mandates vaccines for workers at businesses that have contracts with the federal government was also blocked by several courts.

Texas Attorney General Ken Paxton also announced on Dec. 16 that his state secured a preliminary injunction against the federal mandate for healthcare staff, which only applies in Texas.