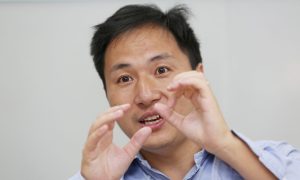 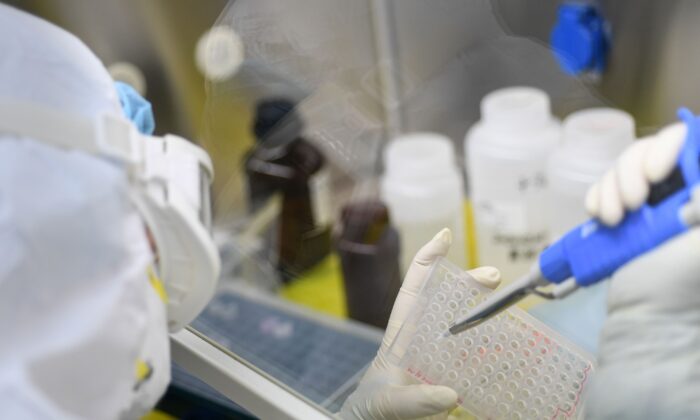 A laboratory technologist working on samples to be tested for the new coronavirus at "Fire Eye" laboratory in Wuhan, Hubei Province. BGI Group, a genome sequencing company based in southern China, said it opened a lab in Wuhan on Feb. 5 that is able to test up to 10,000 people per day for the virus. (STR/AFP via Getty Images)
Social Issues

This is the first of three articles that introduce readers to the research and mission of BGI Group, China’s leading genome sequencing company with customers around the globe. Its research involves collecting, studying, and altering human and animal genes to facilitate such things as biochemical weapons development and even customizing humans.

Recently, a video and pictures of two speeches given by Wang Jian, co-founder and chairman of BGI Group, have been rehashed by the media.

During the 2017 Shenzhen Entrepreneurs Convention, Wang Jian announced that his company had reached an industrial level of success in progressing through genetic reform and gene editing, to gene synthesizing, and mass-producing multiple viruses, bacteria, and large yeasts. He claimed that by 2020, BGI would need only two days to synthesize a bacterium. “It can be a good bacterium, but also can be a frightening bacterium.” He said that BGI would have the technology to “chemically synthesize any life” within the next 5 to 10 years.

“Humans have evolved from cold weapons to hot weapons, to atomic bombs, and will definitely progress to living [weapons]” Wang said.

One month prior to Wang’s speech, the Chinese Communist Party’s (CCP) newspaper Liberation Army Daily published an article titled “How Genetic Weapons Will Affect Future Warfare.” The article discussed how gene-editing technology is being used to modify the genetic code of disease-causing microorganisms and is facilitating the development of China’s next generation of biochemical weapons for use as a strategic deterrent.

On Dec. 8, 2020, another speech by Wang Jian on the topic of customizing humans was revealed in a post on the Chinese social media platform Sina Weibo. In the post, BGI was accused by one of its business partners, Wang Deming, Chairman of Nanjing Changjian Yujia Health Management Co., of engaging in human gene editing to produce “customized humans” and “artificial life.” Deming claimed that BGI’s actions were worse than those of He Jiankui, the Chinese scientist who edited a human baby’s genes in 2018 and who was later jailed.

To reinforce his accusations, Wang Deming shared pictures of a research paper published in the journal Nature on genetic editing of human embryos, in which BGI participated in 2017. He also provided photos of Wang Jian giving a presentation on May 20, 2018, in Nanjing, Jiangsu Province. The photos, showing slides on the big screen, covered a range of incriminating topics including “synthetic genes, artificial life” and “gene editing, modified embryos, modified destiny.” Several of the slides contained pictures of pregnant women and many babies along with BGI’s research paper in gene editing of human embryos.

In response to Deming’s damaging accusations, BGI promptly defended its research and said the biomedical ethics rule of “14 days for human embryos” had been observed and no babies were born among the “58 gene-edited babies.”

Subsequent to this response, any unfavorable information about BGI’s research and operation was removed from all Chinese websites except for the business dispute between Wang Deming and BGI.

The Epoch Times reporter contacted BGI regarding Wang Jian’s 2018 speech about “custom humans” and “artificial life,” etc. No response was received as of press time, other than confirmation of the receipt of the request.

In June of this year, BGI’s CEO Yin Ye told the Chinese media that the market for gene synthesis is much larger than human genome sequencing and gene editing. The company’s official website claims BGI can “provide a variety of full gene synthesis services,” “including artificially designed DNA sequences, and any genes you are interested in.”

In China, BGI’s growth and performance have been compared to the CCP communications giant Huawei. BGI’s annual report for 2020 states: “As the founder and leader of China’s genetic industry,” BGI has built a marketing service network covering more than 100 countries and all of China’s provinces, cities, and autonomous regions, making it one of the few technology companies covering the entire industry chain and application fields of its industry.

In addition to “synthetic life” and “biochemical weapons,” BGI has also conducted large-scale research and obtained biomedical data on China’s residents and has remitted this data to the CCP’s national gene bank.

(To be continued in parts two and three)