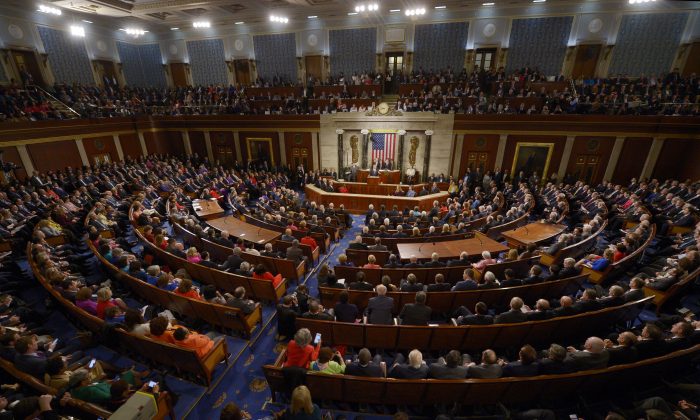 President Barack Obama delivers the State of the Union Address during a Joint Session of Congress at the Capitol in Washington, D.C., on Jan. 12, 2016. (Saul Loeb/AFP/Getty Images)
Opinion

Over more than three decades in Congress, I had the chance to question a lot of federal officials. Most of the time I wasn’t after anything dramatic—I just wanted to understand who was responsible for certain decisions. Want to know how often I got a straight answer? Almost never.

It was easily one of the most frustrating aspects of trying to ensure robust oversight of the government. Our representatives’s job, after all, is to help make government work better. And you can’t do that if you don’t know whom to hold accountable for important decisions. I don’t want to be unfair to officials in the executive branch, many of whom are dedicated public servants who work long hours to serve the rest of us. But they have raised to an art form the ability to dodge responsibility.

Dodging responsibility has been raised to an art form.

This is a problem. Accountability is essential to good governance. I’m not just talking about “transparency”—that is, citizens’s ability to know what’s being done in our name. That’s important, but equally important is holding accountable those who made the decision to do it: ensuring that they are accountable to policymakers, adhere to their obligations, follow the law, and that their actions are appropriate and responsive to the needs of the country.

This may be part and parcel of good governing, but it’s elusive. Accountability requires that officials step up and take responsibility for their decisions, and not try to shift that responsibility to others or to some ill-defined group. It requires unambiguous performance standards, clear codes of ethics, timely reporting, and acceptance of responsibility, especially with regard to budget or spending decisions.

It’s sustained by procedures that encourage responsible stewardship of public funds and a focus on correcting inefficiencies and poor performance. And above all, it rests on robust oversight and review of officials’s performance, not only within the executive branch, but also by Congress and the media.

So how do we get there?

The first step is to make information available to the public, especially when it comes to budgeting. Government performance rests on how it spends the public’s money.

Yet making sure that people see and hear what government is doing only promotes transparency. It’s taking the next step, and ensuring that there’s a clear command and control structure, that promotes accountability. Without clarity on who’s in charge of what and who’s responsible for which decisions, it becomes too easy for officials to remain unanswerable for their actions.

Clear lines of authority mean nothing unless the deciding officials are identified and measured against what actually takes place. No official, in other words, should be without accountability for his or her decisions, which means that executive agencies and Congress alike need to perform regular and robust oversight. Regular audits focused on inefficiencies, waste, and poor performance are critical. Officials need to give a full account of what they do and the decisions they make.

As a nation, we face a growing issue on this front when it comes to federal contractors—that is, the private workforce doing jobs for federal agencies. The government itself doesn’t know how many contract employees it has, but the Washington Post reported last year that federal spending on contracts grew 87 percent—or about 5 percent a year—between 2000 and 2012. This is a problem because it creates an accountability vacuum. There are very few mechanisms for holding contractors responsible for their errors, abuses, and missteps.

Which is why I noted above that the media is as important as Congress and internal government overseers. We as citizens depend on the media to tell us what’s going on in the entire system: within the bureaucracy, in the behavior of contractors, and among legislators who ought to be overseeing both but often don’t. This is a key public responsibility, and the press needs to be staffed and have access to the resources to do a good job—which, these days, is increasingly rare.

Accountability, in other words, is key to good government. All I wanted to know in those congressional hearings was who made the decision about the public’s business. Is that too much to ask?