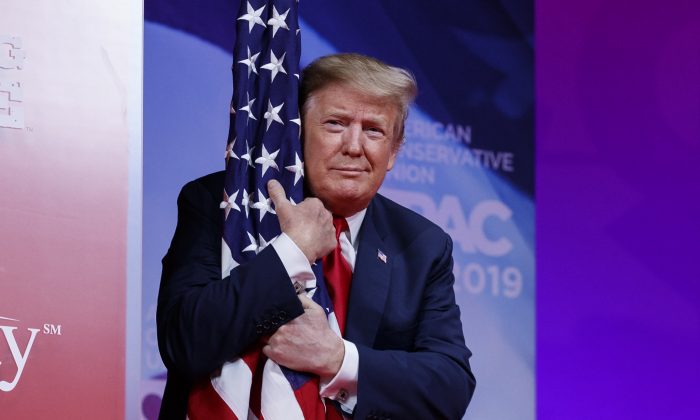 Beyond the Rhetoric: Trump Brings Back Founding Culture

A good friend amusingly described President Donald Trump as “the mouth that roared,” attempting to define him as ineffectual. But he’s the farthest thing from that.

In an age of slick television and internet imagery that has preempted the centrality of the spoken word, he’s a startling throwback.

With words alone—in spontaneous off-the-cuff remarks, in unscripted speeches, and on Twitter—he’s a fount of surprise. Sometimes he seems to surprise even himself, and could as well reply to a question: “How do I know what I think, until I see what I say?” That disturbs some listeners, but delights others.

But regardless, fans and foes alike the world over hang on his every word, and every word he thinks he said, or didn’t say, as the world’s media rise and fall in reaction to his moods, wondering what he will say or do next to shock their political sensibilities.

It all began with the stunned surprise of the career officers and experts complacently steering Steamship America to a more socialist destiny, when Trump singlehandedly crashed the control room, grabbed the wheel, and began turning the ship back from the brink toward which it had been heading—like every other Western democracy—for more than a century.

Taking the fractured social-engineers’ shipwreck called America back to its original sovereign, free, nation-state foundation, is the underlying theme. Cut sprawling legislation, stop killing millions of unborn children, cut taxation, jack the economy, lower unemployment, get the poor off food stamps, kill the enemy then get out of foreign wars, fight for fair trade, control the nation’s borders, become energy independent, disable outside agencies dictating domestic policy to America, and put judges in place who will defend the Constitution as written. Back to the Founding! “America will never be a socialist country!” A busy man.

No public figure in recent memory has so brazenly and directly railed against the equality-mad, globalizing, anti-nationalist program that has been growing everywhere in the West like an invasive weed in the social and moral compost left by World War II.

Make no mistake. If the Cold War was World War III, we are currently in the thick of World War IV. It’s a war against ourselves. Since 1648, when the Treaty of Westphalia halted the horrific wars of religion by institutionalizing specified rights of national sovereignty for the many different peoples of the world, there have been two incompatible conceptions afoot as to how we ought to live.

Should each people, with a defined territory, ethnicity, language, culture, and political-economic system, evolve its own nation-state way of life, settling differences with other nations by way of agreements, treaties, and trade (as Westphalia wisely determined)?

Or should we be trying to unite all humanity under a single international system that defines the most rational political, economic, legal, and moral terms of living, thereby subordinating national ethno-cultural differences, in the hope of ending all wars?

These two ideologies—one nationalist, the other globalist—have been locking horns over mutually exclusive ends since Westphalia, like stubborn mastodons in a duel to the death, and they can never be reconciled. Tragically, during the last century, each of them embraced socialism—either national ethnic socialism (Germany and Italy), or international world socialism (all the communist countries)—as a means to further their clashing visions.

Although there are still remnants of each in our universities and on our streets, they were killed off as major forces in costly wars against the free world, against each other, and even against their own citizens—millions of whom were wantonly slaughtered as “internal enemies.”

Then came the United Nations. At first, it was dedicated to peacekeeping, but since then, to the imposition of global moral, social, health, and economic standards on the world’s nations by way of treaties aimed at regulating many of their internal affairs and sovereign rights.

Upon the heels of this came the European Union, weakening the national borders of European nations, unifying passports, currencies, and trade regulations under a single trans-national European standard. Diminishing the influence of any single national sovereignty or ethnicity over others was, and remains, its overarching agenda. No more power against power. The castration of national powers equally is the theme.

Such organized impositions on the sovereignty of nations are in effect a direct attack on the Westphalian international order, and Trump is the first leader in the free world to say loud and clear that he wants none of it. The rest of you can buckle to a global socialist-style bureaucracy if you want, but America? Never. We are going back to our unique national roots. MAGA: “Make America Great Again!”

But along with those efforts to dissolve tensions between nations has come a further effort to dissolve cultural hegemony within them, and the chief weapon as an effective solvent is the self-contradictory notion of “multiculturalism.”

This term doesn’t, as we may at first imagine, describe the adoption by a nation of many cultures. Rather, it’s an attack on the very idea that any one culture is better—or has ever been better—than any other. If we declare all cultures to be equal in value, then none will have a right to dominance within any nation-state, is the theme.

That’s how multicultural policy has become a weapon of cultural erasure—as was intended. Critics haven’t been surprised to see that this has resulted in a lot of mini-nationalist enclaves within every Western democracy, complete with growing ethnic animosities, violence, and in some countries, even “no-go” zones where police dare not enter.

For as the prescient French critic Pascal Bruckner has said, multiculturalism condemns ethnicities to house-arrest in their own skins. So, let’s see now … we fight nationalism between nations, only to create it a hundredfold within them?

Alas, these strategies for ending domination by a single national culture—the main target being the mostly Caucasian, Greco-Roman, Judeo-Christian culture of Europe and North America, or what students used to call “Western Civ”—have been at work in all the democracies, fueled, as mentioned, by the justifying, though unproven assumption of the equality of cultures. So in the United States, the famous national melting pot—e pluribus unum (from many, one)—has been breaking down at warp speed into a salad bowl—ex uno plures (from one, many).

In 1988, in its own confused and self-contradictory campaign, Canada declared itself to be “the world’s first multicultural nation.”

Almost a decade prior to that, Canadian Prime Minister Pierre Trudeau had seen this policy as a novel means to dissolve the threat to Canadian unity posed by Quebec separatism, and to water down the dominant British cultural influence he disliked at the same time.

So he responded with characteristic flippancy to citizen complaints about this frontal attack on Canada’s deep culture with a patently false statement: “It doesn’t matter where the immigrants come from.”

The truth, however, is that Canada, just like the United States and most other nations descended from mother England, has always been “multi-ethnic,” but never before “multicultural.” What is the difference? It’s quite simple.

Multiple ethnicities will assimilate under a single, deep culture they recognize as better than the one they left behind (that’s why most of them came here), and will preserve their cultures of origin privately, if at all. But multiple cultures, if officially informed upon arrival that their culture of origin has equal value to the one for which they emigrated, will divide the population into as many cultures of origin as exist within the state. The former is a recipe for national unity; the latter for national disunity.

Canada has 20.6 percent foreign-born citizens, the highest percentage among the G8 nations. And while the federal government confirmed that Canada had “only six visible minority neighborhoods” in 1981, by 2001, there were 254, and who knows how many ethnic enclaves there are now? Census-identified foreign cultures now number more than 200 in Canada, and since 1980, far fewer immigrants have become naturalized Canadian citizens—a freefall from almost 93 percent naturalization prior to 1981, to barely over 68 percent by 2010.

What ought to be worrisome is that so strongly do many immigrants now identify with their own cultures of origin that no one can be certain for whom they would choose to fight if Canada went to war with any of their countries of origin. They seem to prefer their own deep culture.

So what is a deep culture? It is to a people as a magnet is to iron filings. It attracts them. It pulls them toward itself and organizes their reality. If you scatter a few million iron filings on a table, they just lie where they fall in a messy jumble, pointing aimlessly like little arrows in all directions, at nothing in particular. However, the moment that you place a big magnet under the center of the table, all those aimless filings will immediately snap into line and point to the center, to the common pull of the big magnet. Big culture. Big magnet. A common attraction. E pluribus unum.

But take away the big magnet, and put 100 smaller magnets under the table instead, and what will you see? All the iron filings will reorganize, each aligning with the closest magnet. The nation-state is then de-centered. Little magnets. Little cultures. No common attraction. Ex uno plures.

Cultures can be deep. Very deep. They can also be skin-deep, moving around on the surface of national life without penetrating deeply into the national psyche. I don’t want to dismiss the fun of skin-deep culture out of hand. Almost everyone living today has direct or indirect access to what has become an international skin-deep culture: French perfumes, bistros, and clothing; American movies; Japanese sushi restaurants; a passerby wearing a turban; lots of foreign cars buzzing around; and a congenial smattering of people with different colored skins and exotic features. Such things make high-consumption, chic societies more enjoyable. But they have no lasting pull. They are little magnets.

A deep culture is profoundly different. It’s the big magnet of a common language, literature, religion, legal system, and economic and political system that penetrates deep into the soul of the people in a thousand conscious and unconscious ways. Like that powerful big magnet, it draws citizens toward each other by way of shared cultural values, traditions, and principles, and most importantly, with the shared shalls and shall-nots of their common moral life. This is a natural product of the Westphalian principle, and it’s currently under attack.

The problem is that citizens will willingly die defending their own deep culture, and throughout history have done so, in droves. But unless engaged in an alliance, they will seldom die for someone else’s deep culture. Nor will they ever die for sushi, French perfume, or their sleek German car.