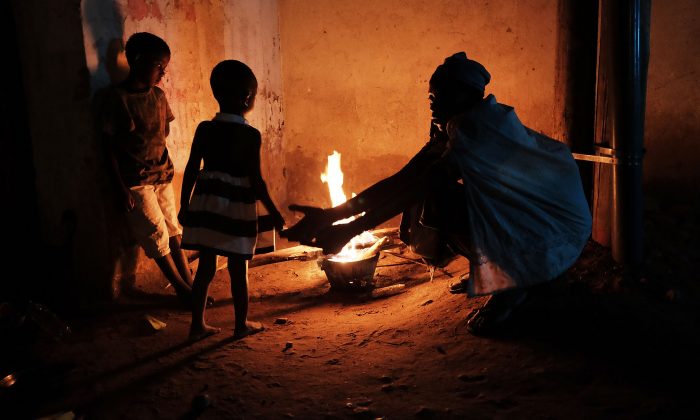 A homeless family cooks their dinner on an open fire in the street of Bujumbura, Burundi, on June 28, 2015. (Spencer Platt/Getty Images)
Opinion

Burundi may have slipped off the world’s attention, but the crisis that erupted in May when President Pierre Nkurunziza announced that he would seek a third term is far from being resolved.

Most commentators have, rightfully so, discussed the political aspects of the crisis. This includes whether Nkurunziza’s third mandate is constitutional and the lack of coherence of the political opposition. They also discussed the alarming political violence and mounting tension with Rwanda.

Often overlooked is the economy, which is central to understanding the backdrop to the most severe crisis Burundi has had since the end of the 1993–2005 civil war. While acknowledging the crucial political dimension of the crisis, this article focuses on the economic situation and its consequences.

With a GDP per capita of $267, the country’s 10.16 million people are among the poorest in the world. Burundi ranked 180 out of 186 in the last Human Development Index.

89 percent of the active population depends on farming a territory as densely populated as Belgium. Coffee, once the proud main export of Burundi, was controversially privatized in 2008 and has been declining for 20 years. Tea and cotton, the other traditional exports, are also in poor shape.

The country has few mineral resources. It has been expecting a lot, so far in vain, from a potentially important nickel deposit. The hopes in gold, which is artisanally mined and had become Burundi’s first export by 2012, collapsed with the recent crash of international prices. Part of Burundian gold has also reportedly been smuggled from the Democratic Republic of the Congo.

The apparently decent 4 percent to 4.5 percent growth of Burundi’s GDP in the past years is dwarfed by a population growth above 3 percent. The number of mouths to feed keeps growing very fast and the GDP per capita has not grown by more than 1.5 percent in the best of the past years.

Even before the crisis, reports indicated that the living conditions were deteriorating for most people. Burundi was, and still is, the hungriest nation on earth. With the political crisis, things have deteriorated even further.

When violent unrests exploded in Bujumbura, the city was paralyzed for months. It concentrates 70 percent of the economic activity of the country.

Trade with regional and local markets was heavily disrupted and is still not back to normal as security forces control displacements of people in and out the capital city. The government recently estimated that the insurrection cost at least $32.7 million in material damage.

At least 190,000 people have left the country since April, and among them investors, business people, and part of the middle class. Most of them still have not returned.

The Burundian diaspora, mostly from Canada, the United States, France, and Belgium, are a habitual and most-welcomed source of cash in the summer. But they did not spent their holidays on the beaches of Bujumbura this year.

Perhaps more important for the economy, Western donors are in the process of cutting their support to Burundi, whose budget relies 49 percent on aid.

The government already had to use its own money to organize the elections, reportedly diverting funds earmarked for malaria and education. And it seems clear that the 2015 budget is now totally off-track. Hypothetical fresh support from Russia or China is unlikely to be enough to balance the budget. Inflation only rose by a bit less than a percentage point since May. But official tax revenues for May-August are about 30 percent lower than expected, and 23 percent less than last year.

Nkurunziza, who was controversially re-elected in August, is now facing an economic crisis that could destabilize him in at least three different ways:

Nkurunziza’s current strategy—in a fashion not dissimilar to his predecessor President Pierre Buyoya—is to blame the insurgents and Western countries for the economic difficulties. This may reinforce him, but probably only for a short while.

In the meantime, Burundians are being pushed towards even more intolerable levels of poverty. The locking of the political space and the volatility of the situation is likely continue to scare off economic actors and international partners and fuel the mismanagement of public services.

In the current context, few have any interest or incentive to look beyond the very short term. The economic and social costs of protracted fragility are huge, even in an already impoverished nation.

The safest route to restoring stability and developing the Burundian economy is to rebuild strong and inclusive institutions that citizens and international partners—including the diaspora that has an important potential for economic development—can trust.

In the past years, the boundaries between the state and party apparatus have blurred at the expense of ordinary citizens. Abuses used to be vocally denounced by the local independent media, but most of them were shut down after the failed May coup attempt.

Calls for a national unity government, which the president says he has responded to by including a few not-too-virulent opposition parties to his government, are missing the point if they only lead to redistributing rents between a slightly larger or different elite group.

Burundi needs a social and economic vision that rests on economic and political institutions that are genuinely accountable and directed to the people, and that everybody, including the poorest and non-party members, can rely on.

Jean-Benoit Falisse is a DPhil candidate at the University of Oxford, U.K. This article is based on a blog that appears on the Oxford Department of International Development site, republished from TheConversation.com