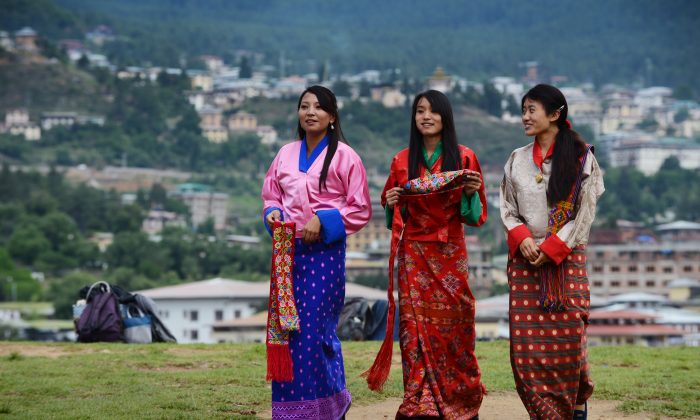 Schoolgirls wear traditional dresses before a cultural event to celebrate the birth date of Bhutan's fourth king at a local school in Thimphu, Bhutan, on June 2, 2013. (Roberto Schmidt/AFP/Getty Images)
Opinion

Beyond GDP: Are There Better Ways to Measure Well-Being?

“At present, we are stealing the future, selling it in the present, and calling it GDP.” —Paul Hawken, environmentalist and author

Imagine if a corporation used gross domestic product (GDP) accounting to do its books: it would be adding all its income and expenses together to get a final number. Nobody would think that’s a very good indication of how well that business was doing. Herman Daly, a former senior economist at the World Bank, said, “The current national accounting system treats the earth as a business in liquidation.” He also noted that we are now in a period of “uneconomic growth”; where GDP is growing but societal welfare is not.

The good news is that there are several alternatives to GDP being actively developed, discussed, and used. One of these is the Genuine Progress Indicator (GPI).

GPI starts with personal consumption expenditures—a major component of GDP—and adjusts it using 25 components. These adjustments include incorporating the negative effects of income inequality on welfare; adding positive elements not considered in GDP, such as the benefits of household work, volunteer work, and higher education; and subtracting environmental costs and social costs like the costs of crime, unemployment, and pollution. In doing so, it paints a more accurate picture of how far we’ve come over the last three decades.

In the United States, the states of Maryland and Vermont officially report their GPI annually. In 2010, Maryland was the first state to officially adopt the GPI as an alternative to GDP. The state’s goal was “to measure whether or not economic progress results in sustainable prosperity.”

Since its beginning, Maryland Gov. Martin O’Malley has actively implemented policies to encourage the increase of GPI. The media has also taken up the challenge of shedding light on the true picture of societal welfare, with media coverage now regularly reporting on changes in GPI.

In 2012, the state of Vermont passed legislation mandating the calculation of GPI. Since then, GPI has been estimated for other states including Colorado, Hawaii, Massachusetts, Michigan, Ohio, Oregon, and Utah, while 10 others have expressed interest in developing their own studies.

This movement toward GPI is part of an international trend, and GPI has been calculated in around 20 countries worldwide. The international research community has begun to develop what is being called “GPI 2.0.” GPI 2.0 seeks to improve standardization and robustness of the current GPI.

GNH is estimated using a survey that takes approximately seven hours per person. In 2013, it was taken by more than 10 percent of the Bhutanese population. The Bhutanese government also established the GNH Commission to assess all new policies for their impact on the “happiness” or well-being of the population.

The Australian Bureau of Statistics also began moving in this direction with the Measures of Australia’s Progress (MAP) initiative. MAP was established to address the question, “Is life in Australia getting better?” MAP provides Australians with 26 indicators related to society, economy, environment, and governance. Unlike the GPI, it does not aggregate the indicators into one overall measure, but allows viewers to make their own assessment regarding the well-being of the Australian population based on the individual indicators. However, funding was discontinued for MAP in early 2014.

Currently, no global consensus exists regarding alternatives to GDP. However, there is growing agreement that the continued use of GDP as a proxy for overall well-being is not appropriate. A range of national indicators exist that are being used around the world.

The Millennium Development Goals, which are ending in 2015, look primarily at health, poverty, and education. To replace them, a U.N.-led initiative has developed a set of 17 Sustainable Development Goals (SDGs). These new goals have a broader agenda that includes the environment, inequality, and sustainable and equitable economic growth, among other aspects.

Although metrics are being developed for each of the 17 goals and their sub-goals, as of yet, no overall indicator has been developed to assess the overall success of the SDGs.

Robert F. Kennedy once said that a country’s GDP measures “everything except that which makes life worthwhile.” The only way to dethrone GDP from its current role, is to start measuring all those things that do “make life worthwhile.”

Dr. Ida Kubiszewski is a senior lecturer at Crawford School of Public Policy at Australian National University. This article is part of an ongoing series, Beyond GDP, which looks at the dominance of GDP in economic thinking and how that might change. This article was previously published on TheConversation.com.