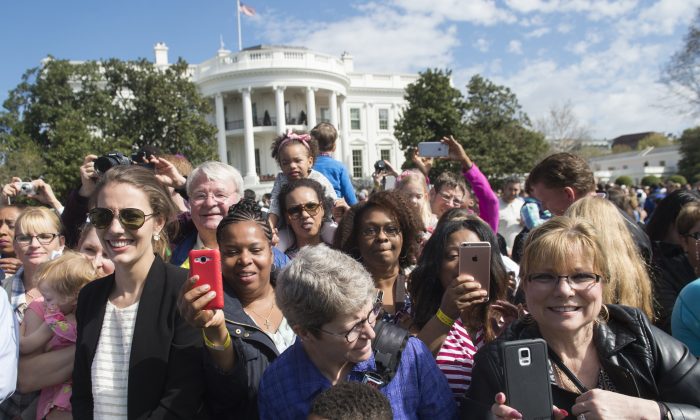 The Obamas were joined by a flock of people on Monday at the White House’s annual Easter Egg Roll, including special guests, musicians Beyonce and Jay Z along with their daughter, Blue Ivy.

The “Formation” singer took a break from her singing duties and was on full mommy duty as mom and daughter mingled with guests and “Sesame Street” characters on the lawn of the White House. Blue Ivy also partook in the Easter egg hunt, and could be seen toting a basket.

The Carters have formed a close relationship with the First Family. Jay Z, real name Shawn Carter, has stated in the past that he and the Commander-in-Chief are phone buddies.

“I’ve spoken to him on the phone and had texts from Obama,” he told New York radio station Hot97. The feelings are apparently mutual, because Obama has claimed the Brooklyn rapper is one of his iPod.

The wives are good friends as well.

Beyonce helped First Lady Michelle Obama with her “Let’s Move Initiative,” releasing a video encouraging the youth to get active. Michelle Obama has voiced her admiration for the 34-year-old pop star.

In an interview with Gayle King during Super Bowl 50, Michelle Obama gushed over Beyonce.