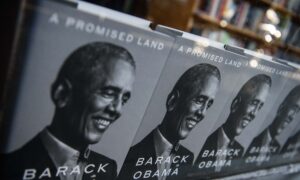 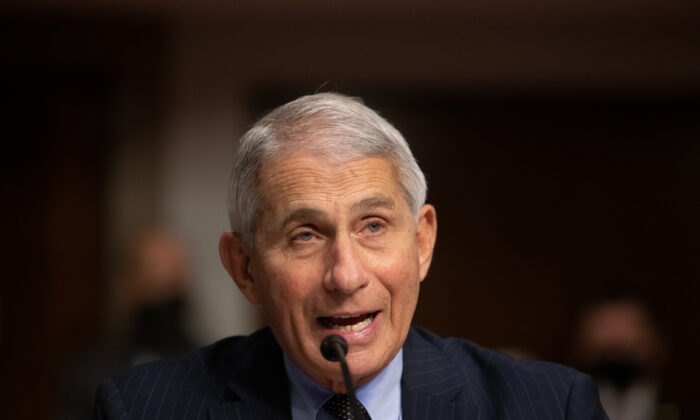 Anthony Fauci, director of National Institute of Allergy and Infectious Diseases at NIH, testifies at a Senate Health, Education, and Labor and Pensions Committee on Capitol Hill, in Washington on Sept. 23, 2020. (Graeme Jennings/Pool/Getty Images)
Viewpoints

“Now is the time to do what you are told,” Dr. Anthony Fauci sternly lectured Americans on Nov. 12. Fauci has good intentions. Behind the imperious tone, he genuinely wants to prevent people from getting sick. But that simple declaratory sentence exposed his belief that “experts” should decide the important issues and the rest of us should obediently go along.

Fauci’s technocratic impulses were on even greater display in a co-authored article in the Sept. 3 edition of Cell, a respected science journal, in which he warned against a looming “pandemic era” during which we will endure repeated episodes of worldwide illness.

To avoid calamity, Fauci wrote, we must empower the U.N. and other international organizations to “rebuild the infrastructure of human existence, from cities to homes to workplaces, to water and sewer systems, to recreational and gatherings venues.”

Such a gargantuan revolution would require the coerced turning of societies upside down and inside out. Everything would be on the table. “Chief among them,” Fauci waxed grandiloquently, “are reducing crowding at home, work, and in public places as well as minimizing environmental perturbations such as deforestation, intense urbanization, and intensive animal farming.”

It isn’t just Fauci. The world’s cooperation with pandemic restrictions unleashed the ruling class’s desire to establish a hyper-technocratic imperative. The Davos crowd is leading the charge. As Klaus Schwab, founder and executive chairman of the World Economic Forum, explained in a June column, the pandemic’s “silver lining” was to demonstrate “how quickly we can make radical changes to our lifestyles.”

To encourage even greater public subservience, the WEF launched “the Great Reset Initiative” with the modest goal (he wrote sarcastically) of universally “revamping all aspects of our societies and economies, from education to social contracts and working conditions” with “every industry, from oil and gas to tech, transformed.” That’s centralized control on meth!

Let’s call it the Great Reset New World Order. Its ultimate goal? To deploy successful anti-pandemic behavioral control strategies to the cause of saving the planet from—SURPRISE!—climate change.

“As stay-at-home measures were implemented around the world,” the Great Reset website proclaims, “the internet was populated with startling pictures of pristine skies over Los Angeles, suddenly-apparent Himalayan mountain peaks in India, and satellite images of declining pollution over China. While fleeting, these scenes provided a glimpse of what could be possible … without polluting the air and hastening the climate catastrophe.”

Remember the awful lockdowns? Sure, they increased social isolation, suicide ideation, and opioid addiction, not to mention triggering an economic implosion. But hey! They were great for the environment!

And guess what, boys and girls? We need to pay more for carbon. “Economists have identified two forms of carbon pricing as particularly flexible and efficient: emissions trading schemes (or “carbon markets”), and carbon fees or taxes, usually with proceeds that are refunded to the public.” Sounds like a Ponzi scheme to me.

Like every revolutionary movement, the Great Reset New World Order needs a pernicious enemy. Not surprisingly, that adversary role is assigned to nation-state loyalty, denigrated as mindless xenophobic nationalism.

“Nationalist backlash has made effective global governance more difficult, and more necessary,” the WEF declares without irony. In other words, when believers in national sovereignty successfully resist technocracy, globalists don’t have to listen. It merely means they should redouble their efforts.

The world’s governing elites and hierarchs of the cultural establishment have also volunteered in service to the Great Reset. Prince—long live the Queen—Charles believes that COVID-19 provided a “golden opportunity” to “reset ourselves,” and, among other actions, create a means of enabling “net zero carbon emissions”—which of course has nothing whatsoever to do with the pandemic.

More portentously, Pope Francis recently advocated strengthening the powers of the United Nations so “the concept of the family of nations can acquire real teeth.” Ouch.

Ditto UK Prime Minister Boris Johnson, who said that events such as the plague “are the trigger for social and economic change.” Canada Prime Minister Trudeau waxed even more enthusiastic, calling the pandemic “an opportunity for a reset” to “reimagine economic systems that actually address global challenges like extreme poverty, inequality, and climate change,” which again, is all very far afield from overcoming COVID-19.

The mainstream media is mostly on board, too. Time magazine, as just one example, recently devoted a cover story to the Great Reset, featuring interviews with “leading thinkers” opining on “how to transform the way we live and work.”

Needless to say, the big brains advocate technocratic solutions. Kengo Sakurada, Group CEO of Sompo Holdings, Inc., proclaims: “In its present form, capitalism is not truly contributing to the well-being of humanity. We need to reimagine capitalism, to incorporate social sustainability and people’s well-being.”

Allow me to translate: The private sector will become the prime enforcers of Great Reset social transformations—a trend we are already witnessing.

Indeed, in another article, Prince Harry and Meghan Markle (good grief!) “discuss misinformation with Silicon Valley’s biggest critics.” Unsurprisingly, the article supports even greater censorship of social platforms than we have already witnessed. “It’s up to the tech companies to self-regulate their content—or, failing that, governments to step in and impose restrictions.” In such a mandated mediated discourse, guess which views would be allowed open dissemination and which would be throttled.

So far, the Great Reset has been mostly talk but little action. That may be because President Donald Trump isn’t among the reset-and-remake enthusiasts.

If we have a President Joe Biden—who bragged he would “follow the science”—expect him to participate in centralized schemes to rebuild the infrastructure of human existence, establish a Great Reset, or whatever one wishes to call the great gestating technocracy. If that happens, Fauci won’t be the only one lecturing us to “do what you are told.”