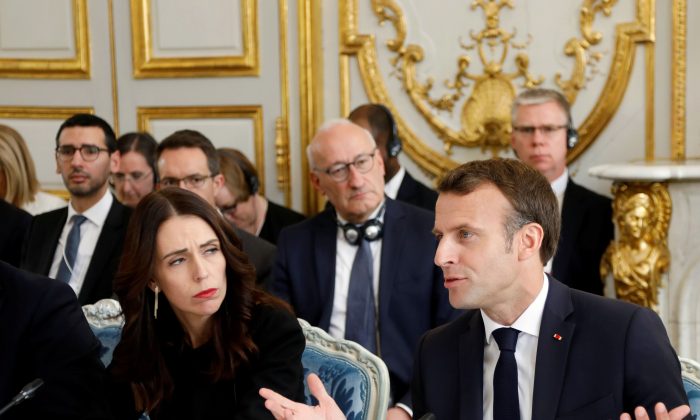 New Zealand Prime Minister Jacinda Ardern and French President Emmanuel at the launching ceremony for the Christchurch Call to Action, an initiative aimed at curbing extremism online, at the Elysee Palace in Paris on May 15, 2019. (AP Photo/Francois Mori)
Viewpoints

Canada is mulling a new approach to monitoring and curtailing hate speech online. Although a reasonable and prudent proposition at first glance, there is a real risk such a move could undermine our democracy. Aside from the logistical difficulties that come with enforcement, curtailment of speech can produce unintended consequences that can be more divisive than hate speech itself.

The move was born of the Christchurch Call to Action, a pledge organized in response to the mass shooting in Christchurch in March that claimed the lives of 51 people. The global pledge calls for governments and online service providers to make voluntary commitments to prevent people from using the internet to promote and sensationalize extremism or acts of terrorism.

Countries like Germany and France have adopted the pledge and implemented controls aimed at regulating online hate speech and combating extremism, and Canada is joining them. To that end, Ottawa has announced Canada’s Digital Charter, and has taken measures to revive a controversial hate speech law that was repealed in 2013 due to free speech concerns.

A Right to Offend

Freedom of expression is protected as a “fundamental freedom” by Section 2 of the Canadian Charter of Rights and Freedoms. Although the Charter grants the government the power to enforce “reasonable limits,” it has been used sparingly, and for good reason. Freedom of Speech is a core democratic value that affords one of the great protections of democracy. In contrast, totalitarian regimes maintain their hold on power by censoring information and speech, ensuring that their citizens remain ignorant and unable to differentiate fact from propaganda.

Embedded in free speech is the right to offend. Disparaging viewpoints will inevitably clash, and the ugly side of human nature may prevail for a short time. But history has proven that open, democratic societies amend their most profound differences without violence. Freedom of speech is precisely the valve that lets the steam out of the boiling pot of conflicting ideals and prevents the vilest side of human nature from spilling over into the public sphere. This approach is far, far superior to the totalitarian alternative of a promised utopia where speech and thought are regulated by the ruling regime.

Of course, debate of contentious issues in free societies can sometimes get nasty and even violent, but this is more because we’ve not only lost respect for our fellow man, but virtues like compassion and understanding have gone by the wayside. Fostering these would do more to iron out differences of opinion than legislation ever could.

Certain protections are required to prevent the incitement of violence against those of a particular race, gender, religion, or disability, and these need to be honoured—but their expansion should be kept to a minimum.

Hate Speech as a Weapon

The crux of the problem in regulating hate speech is that someone needs to define what it is. Who gets to decide what constitutes hate, and who can be trusted to do so in a non-partisan, objective way? Do Google and Facebook have the moral authority to decide on the public’s behalf what opinions and positions are sufficiently hateful to warrant censorship?

In recent years, the concept of hate speech has been weaponized by radical leftists who have capitalized on the power of the term by labelling those with whom they disagree as merchants of hate speech.

Jordan Peterson, one of Canada’s most famous intellectuals and a fierce free-speech advocate, has become a lightning rod for the slings and arrows of radical leftists seeking to take him out by any means necessary. Peterson famously opposed Bill C-16, an amendment to the Canadian Human Rights Act that adds gender identity and gender expression to the list of prohibited grounds of discrimination. His argument was that the government should not compel speech by criminalizing the misuse of gender pronouns. He was not against non-binary or transgender persons—only the government’s overreach in compelling speech.

In the aftermath of Peterson’s sudden rise in to fame as a result of his stance, he was labelled a fascist, bigot, Nazi, and alt-right harbinger. His lecture tours were met with protesters whose goal was to shut down the conversation and silence him. Their aim was not to discredit Peterson’s ideas on their merit but to have them permanently wiped from the public consciousness. Their most oft-used tactic was to consistently label Peterson as alt-right and a peddler of hate speech. As a result, many of Peterson’s speaking engagements were cancelled due to political pressure.

It is important to note that the protesters refused to articulate just which ideas presented by Peterson constituted hate. But it didn’t matter. The label alone was enough to discredit him.

In the aftermath of the Christchurch massacre, Peterson’s best-selling book “12 Rules for Life” was temporarily removed from New Zealand bookstore Whitcoulls. Was it because the shooter referenced the book or professed some sort of ideological alignment with Peterson’s thoughts and propositions? No, far from it. Peterson’s core messages of competence and responsibility were antithetical to the shooter’s manifesto. It is interesting to note that during the “12 Rules for Life” ban, Whitcoulls continued to stock Hitler’s “Mein Kampf” and Mao’s “Little Red Book.”

Hate Speech in the Digital Age

The digital age has presented unique challenges in regulating online discourse. Anonymity has emboldened the dregs of humanity to put forth all sorts of hate-filled and repugnant ideas.

Bewildered governments are now leaving it in the hands of social media platforms like Twitter and Facebook to regulate loose and inconsistent definitions of hate speech. These huge social media platforms have become the most important means of disseminating information and the most impactful in communicating ideas. Their power is immense and not proportionate to the small number of people responsible for controlling online communication.

To be banned, silenced, or censored on these platforms is akin to being excommunicated from society. And that is dangerous, because the excommunicated will find darker corners to express their views. Consumed with resentment, their dissatisfaction will surface in the worst of ways.