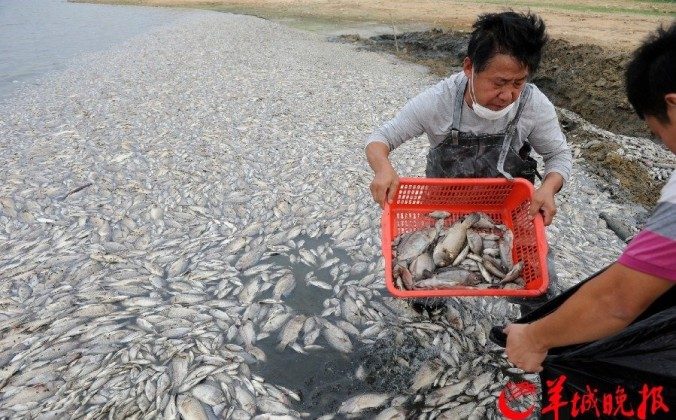 Thousands of fish have died in a lake in Shenzhen, Guangdong Province, in October 2013, probably due to pollution from sewage and industrial wastewater. Food safety issues have been haunting mainland Chinese for a very long time. (ycwb.com)
China

Foods Everyone Should Avoid in China

Food safety issues have been haunting mainland Chinese for a very long time, but many people are ignorant as to just how serious and pervasive the toxic food problem really is.

A graduate student of food technology has unveiled on an online post what foods people should avoid. He warned to be especially skeptical of foods that appears exceptionally fresh and nutritious. Those are generally the more toxic ones, he said.

According to the student, the source of his posted information is from lectures given by his university professor.

The following is a summary of the student’s post.

Stay away from yoghurt; it often contains substandard ingredients. Check labels to avoid products made from milk powder and reconstituted milk.

Overuse of pesticide is very common in China. A common misconception is that pesticides on vegetables can be washed off. But the most commonly used organic phosphorus pesticide is not water soluble; it sticks to the leaves like oil, and is very hard to wash off. Besides, some pesticides are applied to the plants’ roots and are absorbed into the plant, so there is no way to remove them by washing.

Purchase organic produce from a reliable source (or start a vegetable garden).

The fish may not survive that long. It has thus become a common practice among fish venders to add Malachite Green (MG), an industrial dye, to the tank water to help the fish survive longer. MG kills bacteria and is very cheap, but it is also a carcinogen. Therefore, frozen fish is the healthier choice.

With the overuse of pesticides, and frog having a big appetite, large amounts pesticides are now found in frogs. Eels are also no longer safe to eat. It has been widely reported that farmers feed contraceptives to finless eels to accelerate their growth, and this has become an unspoken-of industrial standard for eel farming.

Beware of shellfish. Rivers and seas are very polluted. Heavy metals such as mercury, nickel, and chromium, are a major pollution problem. Shellfish eat plants and animals floating in the water or living in the mud and sand where the heavy metals are deposited.

Various kinds of pathogenic microorganisms are also contained inside shellfish. When processing shellfish, it is difficult to reach a temperature high enough to kill these microorganisms. When you order shellfish in a restaurant, the cook usually stir-fries it lightly, and you end up eating a lot of bacteria–along with the heavy metals.

Stay away from smoked foods, including sausages. They often contain artificial coloring agents to make them look good. In addition, there is the problem of excessive nitrate.

There are many issues with seafood served at restaurants. One is the common practice of using Formalin on seafood to improve its look and taste.

Braised pork is another dish to avoid in restaurants. Although it often tastes and looks much better than home made braised pork, the chemical Ethylmaltol is frequently used to give the meat a shiny, dark red color and special flavor.

Do not buy individual frozen dumplings. It is very likely the vender is selling expired dumplings that were originally packed in bags.

Stay clear of roadside food vendors. In the past, they used to be favored for their delicious food and cheap prices, but pressure from inflation has driven roadside food vendors to seek cheaper ingredients, such as gutter oil for cooking. Gutter oil is recycled oil collected from restaurant fryers, sewer drains, grease traps, and slaughterhouse waste.

According to the university professor, gutter oil is widely used. It has its own production chain, with different groups in charge of dirty oil collection, transportation, sales, and even bribing of supervision departments.