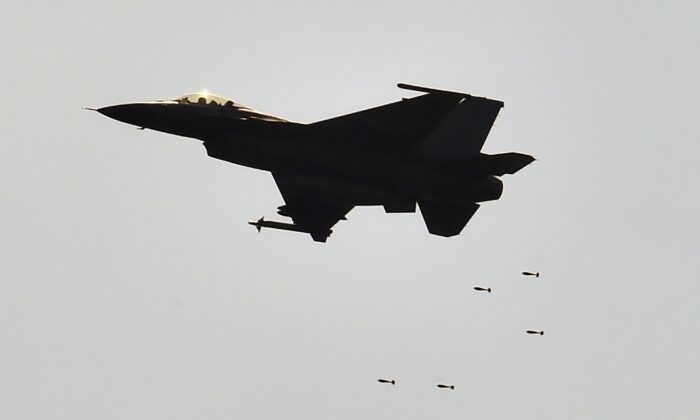 Will the US prevent a communist 'bamboo curtain'?

An NBC Meet the Press special on May 14  presented a war game conducted by the Center for a New American Security (CNAS), a Washington-based think tank. On the surface, the game appeared to “educate” its audience. However, looking deeper into the messages delivered, “education” was not its purpose.

These are the “conclusions” as quoted from the NBC news article about the war game:

This NBC report notes that “it may sound like a purely academic exercise but, in fact, it’s deadly serious.” Even the monthly Air Force Magazine picked up the story and repeated some of the CNAS’s talking points. Luckily, one senior retired U.S. Air Force officer recognized that the scenario was far-fetched.

NBC assumed the CNAS game is consistent with what we know about CCP assumptions about what the United States will or will not do to stymie an invasion.

The CNAS war game’s most important problematic assumption is that the CCP would order the People’s Liberation Army (PLA) to conduct a preemptive strike against U.S. bases in Japan and Guam. First, attacking the U.S. military bases and killing American soldiers, airmen, sailors, Marines, and the U.S. and Japanese civilians will bring a hellfire on the CCP—and the CCP is fully aware of such a response.

An attack on the U.S. territory of Guam would remind the U.S. public of the last time an Asian country attacked the United States and what transpired; Japan attacked Pearl Harbor and, after four years of hard fighting, was the recipient of two atomic bombs in August 1945.

The CNAS assumption about attacking U.S. Pacific bases is analogous to asserting that Vladimir Putin would preemptively attack NATO bases in Europe as a prelude to Russia’s invasion of Ukraine. The CNAS’s assumption is fantastical and unrealistic.

Having argued that the CNAS made a strategic blunder, I investigated the background of one of the key participants, Michèle A. Flournoy. Flournoy and Kurt M. Campbell co-founded the CNAS in 2007 as a 501(c)3 tax-exempt nonprofit organization. The CNAS touts its research as independent and non-partisan. This article argues that this war game was partisan and supports indirectly or directly the CCP propaganda and media warfare campaigns conducted against Taiwan and the United States.

According to the CNAS website, “Michèle Flournoy is Co-Founder and Managing Partner of WestExec Advisors, and former Co-Founder and Chief Executive Officer of the Center for a New American Security (CNAS), where she currently serves as Chair of the Board of Directors.”

Prior to her selection as the under secretary of defense for policy from February 2009 to February 2012, Flournoy “co-led President Obama’s transition team at the Defense Department.” In other words, she has close ties to the Obama administration and the Biden administration.

Campbell was the Obama administration’s assistant secretary of state for East Asian and Pacific affairs. Currently, Campbell is the Biden administration’s first designated National Security Council coordinator for the Indo-Pacific.

Why did Washington send people who are not part of the current administration to deliver an important message to Taiwan? President Joe Biden could have sent a current assistant secretary of defense or state. Consider how Tsai felt when she had to swallow her pride and pretend she was grateful for this after-thought hodge-podge crew thrown at her because the Biden administration was embarrassed by former Secretary of State Michael Pompeo’s visit to Taiwan later that same week.

In 2020, Mike Green and Evan Medeiros co-wrote an article in Foreign Affairs arguing that Taiwan should not buy expensive weapon systems. They argued:

“These [weapons] do little to deter a combined naval, air, and missile campaign from China—and the PLA will always be bigger and better equipped than Taiwan’s army in a ground battle. Rather, the United States should work with Taiwan to develop asymmetric military capabilities that would actually stand a chance of deterring a Chinese invasion or attacks on critical infrastructure.”

The weaknesses of the asymmetric weapons strategy was well documented by this author’s recent two articles in Taiwan News. Absent a guarantee that the U.S. military would intervene in an invasion of Taiwan by the PLA, the U.S. government is asking the Taiwanese to commit national suicide. The asymmetric military capabilities proposed by these “advisers” do not “deter” a Chinese invasion or attacks on critical infrastructure.

By allowing Taiwan to only purchase these asymmetric weapons at the exclusion of others needed to address at least four other attack scenarios makes Taiwan more vulnerable. All five attack scenarios are decapitation (missile and air strikes), naval and air blockade/embargo, invasion, border operations (quickly taking Taiwan’s small islands), and all-out regional war.

What Is the War Game’s Message to the US Population?

The CNAS war game had several subtle messages that corrupt the U.S. popular support for Taiwan, such as the following:

What Is the Message to the Taiwanese Population?

The war game’s message to the Taiwanese population is the following:

What Is the Message to the CCP and the PLA?

The CCP’s Goal Regarding Taiwan

A CCP “core interest” (核心利益), the equivalent of U.S. vital interest, is to absorb Taiwan into China. The CCP views Taiwan’s political independence as an issue of “state sovereignty, national security, territorial integrity and national reunification,” which is more important to the CCP than economic stability. Helping Xi Jinping accomplish this goal would make any person or country a friend.

The CNAS war game conducts psychological warfare in support of the CCP and against Americans and Taiwanese by positing that American military support for Taiwan is destined to fail.

Psychological warfare “seeks to influence and/or disrupt an opponent’s decision-making capability, to create doubts, foment anti-leadership sentiments, to deceive opponents and to attempt to diminish the will to fight among opponents,” according to a report by the Office of the Secretary of Defense.

Media warfare is “a constant, ongoing activity aimed at long-term influence of perceptions and attitudes,” according to The Heritage Foundation.

Taiwan represents a new democracy that opposes the despotic rule of the CCP and demonstrates that Chinese people can successfully (economically and politically) have a self-ruled democratic society with Chinese characteristics.

If the PLA took Taiwan, the CCP would threaten U.S. alliance partners Japan and South Korea militarily, politically, and economically. A declassified CIA report addresses the economic threat; the Senkaku Islands are near a large oil reservoir discovered in 1968. Japan’s Senkaku Islands, claimed by the CCP (since 1970), are easily within reach (about 100 hundred miles north of Taiwan—see map here).

The PLA would conduct a military buildup throughout Taiwan to project force from the first island chain to the second and beyond. For example, the east side of Taiwan, with its very deep-water access, is the perfect location for the PLA to build nuclear submarine bases for its nuclear attack and its nuclear-armed submarines. These submarine ports would make it difficult for the United States and its allies to track the location of these submarines, providing China with a greater deterrence capability against the United States.

In other words, the CCP conquest of Taiwan would place China in a dominating position in the Pacific Ocean and embolden the CCP to consider other expansionist actions to “rectify” other claims it has in the Pacific, such as the “nine-dash line” in the South China Sea, Senkaku/Diaoyu Islands, and Okinawa.

The loss of Taiwan would be a worse situation for the United States and its allies than the embarrassing withdrawal from Afghanistan. Taiwan’s loss to the CCP would be another example of America’s retreat from seeking to support and maintain global norms and rules. The CCP would force these Asian countries into making dangerous compromises that could place them behind a new “bamboo curtain” with Chinese communist characteristics.

“That any effort to determine the future of Taiwan by other than peaceful means, including by boycotts or embargoes, is considered a threat to the peace and security of the Western Pacific area and of grave concern to the United States.

“That the United States shall provide Taiwan with arms of a defensive character and shall maintain the capacity of the United States to resist any resort to force or other forms of coercion that would jeopardize the security, or social or economic system, of the people of Taiwan.”

The TRA asserts a U.S. responsibility to defend Taiwan from PLA attacks. The Biden administration should stand up to the CCP and re-assert the U.S. support for Taiwan’s defense, and conduct a massive arming of Taiwan along with training that enables the full power of joint and combined military operations (air, ground, sea, subsurface, space, cyber, and special operations)—with the assurance that the United States will fight to ensure democracy for the people of Taiwan.

The training should not focus solely on tactical training of ground forces using “asymmetric weapons” as the United States did in Ukraine. Instead, the United States should train the Taiwan military so that it can participate in the type of combined and joint operations used to free Kuwait from Iraqi forces in the 1991 Persian Gulf War.

Flournoy and the CNAS are furthering the CCP’s political warfare against Taiwan by sending messages through the war game while also reinforcing the Biden administration’s desire to weaken Taiwan through its “asymmetric weapons” strategy. These manipulations of the American and Taiwanese populations must stop.

If the U.S. government protected a non-democratic nation (Kuwait) against Saddam Hussein’s authoritarian regime (Iraq) in 1991, then why wouldn’t the United States protect a democratic nation (Taiwan) against another authoritarian regime (the CCP)? If the United States pretends to intervene but fails to stop the PLA, the result would be disastrous for Asia and the entire world.