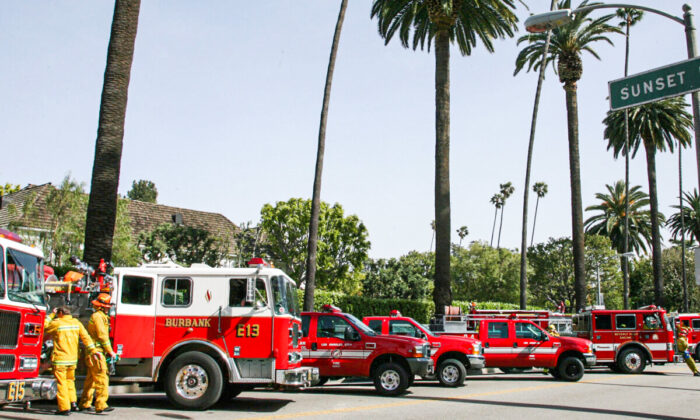 BEVERLY HILLS, Calif.—Two Beverly Hills firefighters and a nonprofit group are suing Los Angeles County and the city of Beverly Hills, alleging the county’s health care worker coronavirus vaccination mandate should be declared void and that the city has no authority to question religious exemptions to the mandate.

The Los Angeles Superior Court lawsuit was brought Dec. 10 by Beverly Hills firefighters Josh Sattley and Ettore Berardinelli Jr. and the organization Protection for the Educational Rights of Kids (PERK). PERK’s website states it is a grassroots organization dedicated to empowering educators and parents to take an active role in education-centered legislation.

But the city says the work of emergency first responders puts them on the front lines of patient care.

“While we have not yet seen the lawsuit, the city remains committed to protecting the health of our residents and visitors during this ongoing pandemic,” a Beverly Hills spokesman said.

A representative for the county couldn’t be reached for comment.

In August, Muntu Davis, the county’s health officer, issued an order requiring that all health care workers in Los Angeles County get a COVID-19 vaccine, including firefighters. The suit alleges Davis’s actions were arbitrary and capricious because he failed to consider evidence of the coronavirus shots’ effectiveness and necessity as well as the costs of the mandate, including short- and long-term side effects that have allegedly been linked to them.

“These actions are blatantly unlawful,” the suit alleges. “Muntu Davis does not have the authority to order thousands of workers to get a medical treatment. The city does not have that power either.”

While some employers have recognized requests for religious and medical exemptions, the city of Beverly Hills wants universal vaccination, according to the suit.

“It subjected firefighters who requested a religious exemption, like Mr. Sattley and Mr. Berardinelli, to cross-examination designed to undermine their credibility and to pressure them, under threat of prosecution, to give up their religious freedom and get the shot,” the suit states.

Sattley objected to the vaccine mandate and has been on unpaid leave for months, the suit states. Berardinelli received a religious exemption, but has been under constant review by the city and subjected to retaliation, the suit alleges.

While extending his religious exemption earlier this fall, the city assigned Berardinelli, who recovered from a COVID-19 infection and believes he has natural immunity, to a different job that receives far fewer calls, according to the suit.

“Questioning the sincerity of one’s religious beliefs to deny a request for an exemption to the mandate constitutes religious discrimination and violates federal and state civil rights laws,” the suit states. “It also violates the mandate itself.”

Moreover, the city and county “should not be in the business of cross-examining people about their religious beliefs,” the suit states.