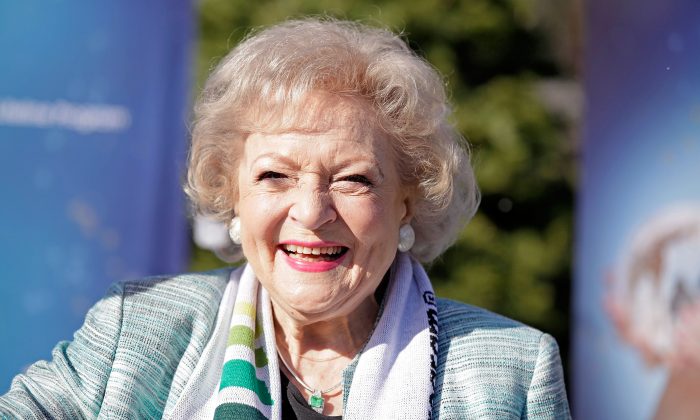 Betty White, the longtime actress and comic, hasn’t died but an article appears to be making fun of death hoaxes, saying she “dyes her hair” at home.

A number of people thought the fake article meant she had died, and it generated hundreds of thousands of shares on Facebook.

The bogus article was posted on Empire News, a self-described “satire” website. “In a press release from her long-time manager Jeff Witjas, it has been confirmed today that actress Betty White, best known for her roles on TVs The Mary Tyler Moore Show, The Golden Girls, and Hot in Cleveland, is not a natural blonde,” it reads. It includes this fake quote: “Betty is a solitary kind of person … She likes to relax in her home with her animals, and she rarely likes to discuss the fact, at least in public, that she is actually a brunette. She has been dyeing her own hair in her home for decades. Betty has often told me she feels it is relaxing and soothing to dye her own hair, peacefully in her home, where she can laugh and enjoy time with her animals. She’s said on more than one occasion that as a blonde, she has had ‘more fun’ in her roles, and in life.”

According to a disclaimer, Empire News isn’t real and shouldn’t be taken seriously.

“Empire News is a satirical and entertainment website. We only use invented names in all our stories, except in cases when public figures are being satirized. Any other use of real names is accidental and coincidental,” the disclaimer says.

A large number of people apparently believed the hoax and thought she had died at 92. And also, many people weren’t too happy with the hoax.

“This article is in incredibly bad taste and not even remotely funny,” one person wrote in the comments section.

Added another, “You people are NOT FUNNY! You should be banned as you call yourself “Journalists” You give them a bad name!”

Said another, “Satire implies comedic qualities. This is nothing more than click bate. Empire news is worse than trash rags in the grocery isle. They are more like a street preacher that screams hateful things to get attention. congrats.”