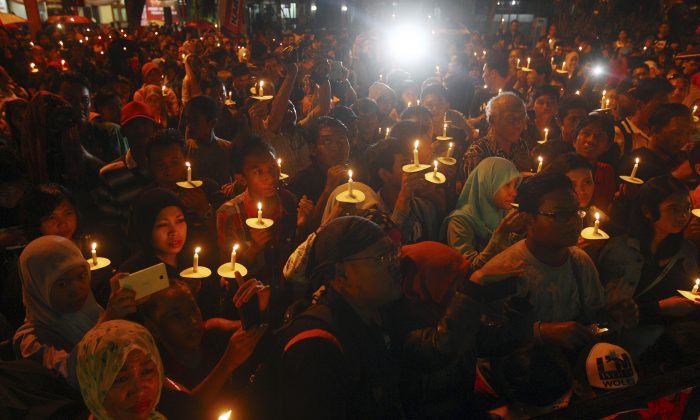 Indonesians hold candles to pray for the victims of AirAsia Flight 8501 in Surabaya, Indonesia, Wednesday, Dec. 31, 2014. Bad weather hindered efforts to recover victims of the jetliner on Wednesday, and sent wreckage drifting far from the crash site, as grieving relatives prayed for strength to endure their losses. (AP Photo/Firdia Lisnawati)
Asia & Pacific

PANGKALAN BUN, Indonesia—A much needed break in the weather gave searchers a window Thursday to “fight with full force” to find the victims of AirAsia Flight 8501, with officials also hustling to locate the fuselage of the plane that crashed in the sea four days ago.

Only seven of the 162 bodies have been recovered so far, with four of them found over the past two days arriving Thursday morning in Pangkalan Bun on Borneo island. They will later be flown for identification to Surabaya, where the two-hour flight to Singapore originated on Sunday.

“The visibility is good this morning, we are ready to fight with full force to search for bodies, wreckages that can reveal what went wrong with this accident,” said First Marshal Agus Dwi Putranto, an Air Force Operation commander helping to lead the search, adding four aircraft were dispatched to the area just after sunrise.

Choppy conditions had prevented divers from entering the water on Wednesday, and helicopters were largely grounded. But 18 ships surveyed the narrowed search area. Sonar images identified what appeared to be large parts of the plane, but strong currents were moving the debris.

Thursday’s break in weather — blue skies and calm seas despite earlier storm predictions — could greatly speed up recovery efforts that have been severely hampered since the first bodies were spotted on Tuesday. Vice Air Marshal Sunarbowo Sandi, search and rescue coordinator in Pangkalan Bun, the closest town to the targeted area, said he was hopeful divers would be able to explore the wreckage site.

“It’s possible the bodies are in the fuselage,” he said. “So it’s a race now against time and weather.”

It is still unclear what brought the plane down. The jet’s last communication indicated the pilots were worried about bad weather. They sought permission to climb above threatening clouds but were denied because of heavy air traffic. Four minutes later, the airliner disappeared from the radar without issuing a distress signal.

The cockpit-voice and flight-data recorders, or black boxes, must be retrieved before officials can start determining what caused the crash. Some items recovered so far include a life jacket, an emergency exit window, children’s shoes, a blue suitcase and backpacks filled with food.

Simple wooden coffins — numbered 001 and 002 — with purple flowers on top contained the first two bodies, which were sent Wednesday from Pangkalan Bun to Surabaya for autopsies. The two victims were a woman wearing blue jeans and a boy. Three males and two females were also recovered, all but one was transported from a warship Thursday.

Nearly all the passengers were Indonesian, and many were Christians of Chinese descent. The country is predominantly Muslim, but sizeable pockets of people of other faiths are found throughout the sprawling archipelago. Around 10 percent of those in Surabaya, the nation’s second-largest city, are Christian.

Many family members have remained at the Surabaya airport since getting word that the plane had disappeared. Some, like 15-year-old Chiara Natasha, are now alone.

Her entire family was coming to visit her in Singapore for New Year’s.

She had just moved there in November to study at a Methodist girls’ school on a government scholarship. Her parents and two brothers had promised to join her to celebrate the holiday and help her settle into dormitory life.

But instead of greeting her relatives at the airport, she returned home Sunday to Surabaya, Indonesia, to seek any word about the fate of AirAsia Flight 8501, praying that they had somehow survived.

Families who lost loved ones aboard the jetliner endured another excruciating day of waiting Wednesday as bad weather hindered efforts to recover any more bodies and sent wreckage drifting far from the crash site.

“Help us, God, to move forward, even though we are surrounded by darkness,” the Rev. Philip Mantofa, whose church lost about 40 members in the disaster, told families gathered in a waiting room at the Surabaya airport.

On Wednesday, about 100 relatives gathered for the airport prayer service where Mantofa urged them to hold onto their faith despite their pain. About 40 members of his Mawar Sharon Church died in the crash.

“Some things do not make sense to us, but God is bigger than all this,” he said. “Our God is not evil.”

Many family members had planned to travel to Pangkalan Bun, 160 kilometers (100 miles) from the area where bodies were first spotted, to start identifying their loved ones. However, the manager of the Surabaya airport, Trikora Hardjo, later said the trip was canceled after authorities suggested their presence could slow down the operation.

Instead, some relatives gave blood for DNA tests and submitted photos of their loved ones along with identifying information such as tattoos or birthmarks that could help make the process easier.

From The Associated Press. AP writers Niniek Karmini, Ali Kotarumalos and Margie Mason in Jakarta contributed to this report.