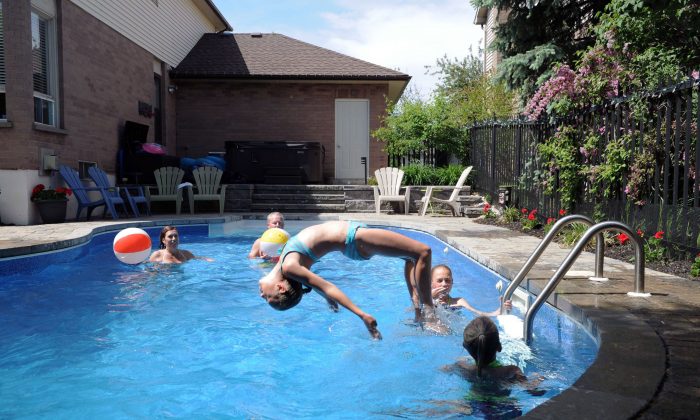 A family has fun in their backyard pool in Burlington, Ont. Drowning remains a leading cause of death for teens and children in Canada, and the BC Coroners Service says more effective water safety education is needed, especially for males aged between 15 and 18. (The Canadian Press/Galit Rodan)
Canada

Important water safety messages are not getting through to those most at risk—young people, particularly young males—and the BC Coroners Service is recommending new measures to curb drowning deaths in the province, which has one of the highest drowning rates in the country.

Between 2006 and 2010, young adults aged between18 and 24 had the highest rates of drowning at 2.2 people per 100,000, according to a report by a panel of experts set up by the Coroners Service. The majority of the victims were males.

After transportation accidents and falls, drowning is the most common cause of unintentional death in Canada, and remains a leading cause of death for both teens and children.

Two-thirds of drowning deaths occur in natural bodies of water such as lakes and rivers. Among children under 5, however, the most common location is backyard pools.

One of the factors that make young males particularly vulnerable to drowning is their curiosity and risk-taking behaviour, according to the Coroners Service.

Case studies reviewed by the panel show that “males in that age group are particularly prone to underestimate the risk involved in activities, overestimate their own swimming abilities, and use substances, such as alcohol, which may affect their judgment, co-ordination, and/or ability to self-rescue.”

In one case, a 17-year-old male drowned on a camping trip after he and a friend went canoeing on a lake without life jackets. Both had been drinking.

According to the report, the survivor “said he was surprised that they ended up capsized and said he had not been prepared for how cold the water was or how hard it was to swim with clothes on.”

Another case study reviewed by the panel was that of a 3-year-old toddler who drowned in a backyard pool that was fenced on three sides and bound on the fourth side by the back of the house. The child had accessed the pool from a sliding glass door in the kitchen.

To help prevent such deaths, the panel made three recommendations: more effective water safety education, especially for teenage males between 15 and 18 years of age; ongoing education for parents, stressing the need for close supervision of young children around water; and urging municipalities to pass bylaws requiring four-sided secure fencing around backyard swimming pools.

The panel suggests the engagement of the Canadian Red Cross, the Lifesaving Society, and the Union of B.C. Municipalities to carry out its recommendations.

A report released by the Ontario Provincial Police (OPP) last week says that the number of boating deaths early in the season this year are at alarming numbers, with 11 deaths reported so far.

“As is the case every year, the majority of these deaths were preventable,” the OPP said in a statement.

“OPP investigators revealed that nine of the victims were not wearing a personal floatation device (PFD) or lifejacket and that alcohol was a factor in at least three of the incidents.”

According to the Canadian Red Cross, more than 160 water-related boating fatalities occur each year. In 90 percent of the cases, the victims were not wearing lifejackets.

Accounting for 56 percent of these deaths are men aged between 15 and 44, with alcohol consumption involved in over 50 percent of the incidents.

“Don’t let anyone put you in an unsafe situation on the water,” said Chief Superintendent Don Bell, commander of the OPP Highway Safety Division.

“If you are a passenger, ask for a PFD or lifejacket before you head out in the vessel and wear it.”