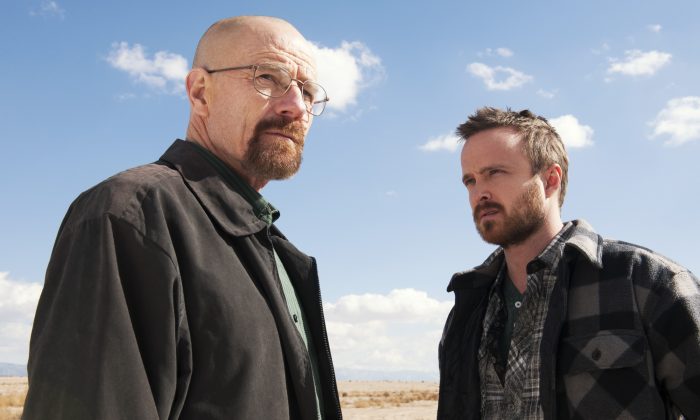 Breaking Bad Season 6 filming exist. An article saying it will start shooting January 2015 is nothing more than a hoax. This image released by AMC shows Bryan Cranston as Walter White, left, and Aaron Paul as Jesse Pinkman in a scene from "Breaking Bad." (AP Photo/AMC, Frank Ockenfels )
Entertainment

Aaron Paul is interested in appearing in the Breaking Bad prequel better Call Saul, which follows Saul Goodman before he meets Walter White.

“It’s a prequel so it’s before Walter White came into everyone’s lives and destroyed them,” Paul told Radio Times.

“This is Bob Odenkirk’s show about Saul Goodman–his whole story,” Paul said. “It would be nice to do an episode or two. It’s really up to Vince Gilligan and Peter Gould. I’ll do whatever they want – I love them to death and Vince Gilligan gave me a career.”

As for a prequel or sequel for Pinkman, Paul said that he doesn’t think it would happen.

“That’s a nice thought but, to be honest, Jesse Pinkman was exhausting. I loved him to death and I was very honored to play him but I don’t know if I could do another series where it was Jesse.”

Paul has since gotten into movies, including A Long Way Down and Need for Speed, which both hit theaters recently.

He also has three films that are filming, prepping for filming, or in post-production, including the Biblical tale of Moses titled “Exodus.”