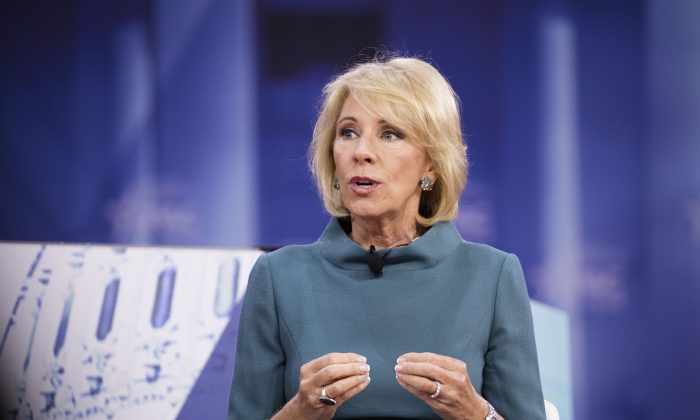 Freedom of expression is fading among students, says Secretary of Education
By Emel Akan
Print

Education Secretary Betsy DeVos said that the threat to free speech on college campuses is a “very timely and serious issue” that needs to be addressed.

“We have seen more and more examples on college campuses in recent years of shutting down free open expression and debate around ideas,” DeVos said on Feb. 22 during an interview on stage at the Conservative Political Action Conference (CPAC).

She reminded the audience that freedom of speech is a fundamental American freedom and a human right.

“We have got to continue to exercise a very foundational part of our nation’s founding in the First Amendment,” she said.

A college “should be a place where we explore other opinions and ideas,” but today “that possibility is more and more controlled,” she said.

“This administration is committed to upholding those freedoms of expression and exchange of ideas.”

College students should share their views without censorship and fear, she urged.

As in the past, one of the main focuses of CPAC this year has been freedom of speech.

“You want to know what resonates to some college that’s run by a bunch of 60s hippies that are imposing some draconian speech code?” he asked during an interview on stage at CPAC on Feb. 22.

He called young people “generation freedom” and urged them to “speak the truth, spread the fire of liberty.”

“That’s a message that resonates with young people,” he said.