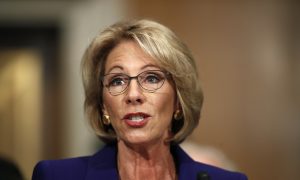 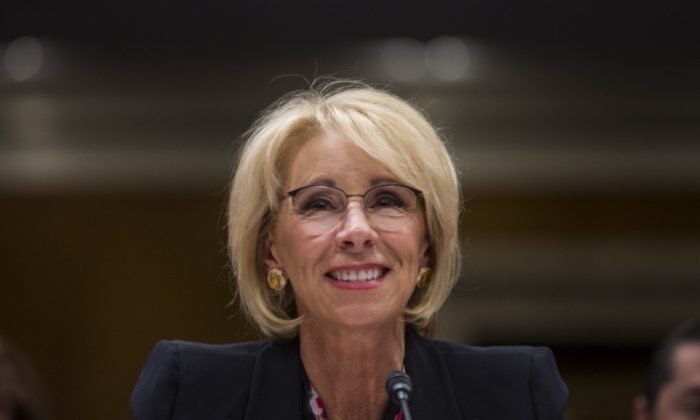 Secretary of Education Betsy DeVos in Washington on March 28, 2019. (Zach Gibson/Getty Images)
US

In a speech on freedom in education at the Independent Women’s Forum on Wednesday, U.S. Education Secretary Betsy DeVos said that “200 … colleges and universities … have teams of speech bullies with the power to punish perpetrators of hurt feelings.”

DeVos decried what she described as the overreach of the previous administration on Title IX, and the extraordinary expansion of the definition of ‘harassment’ at many American universities to such an extent that students and faculty regularly face investigation and punishment “for only speaking their minds or teaching their classes.”

“[G]overnment is generally not the solution to any problem. It’s generally the problem. Government has never made anything better or cheaper, more effective or more efficient. And nowhere is that more true than in education.” @BetsyDeVos at #2019AAG

The comments came as DeVos was presented with the ‘Woman of Valor’ award by the IWF. DeVos said in her speech that while there can be no place for sexual misconduct on campus or anywhere else, “We can’t ignore bedrock American principles: justice, due process, and the rule of law.”

The Education Secretary said that “Title IX, we know, has become less about equality and more about engineering. It’s become less about students and their learning, and more about students and their speech. That’s borne out in the effort to enforce ambiguous and incredibly broad definitions of assault and harassment. Too many cases involve students and faculty who faced investigation and punishment for only speaking their minds or teaching their classes. Any perceived offense can become a full-blown Title IX investigation.”

DeVos then went on to stress that “If everything is harassment, then nothing is.

“Punishing speech protected by the First Amendment trivializes actual harassment. Harassment codes which trample freedom of speech derail the primary mission of a school—of learning … that is, to pursue truth. Sadly, students are often told there is no such thing as truth. Acknowledging it means certain feelings or certain ideas could be wrong. Too many institutions of higher learning come down on the wrong side of all that.”

DeVos said that a so-called ‘Bias Response Team’ had been established at the University of Michigan—essentially campus cops who had the power to investigate students for incidents of ‘bias’ and hurt feelings. A circuit court subsequently ordered the team to be disbanded.

However, DeVos did not believe the court ruling caused the university to have a change of heart. “Although they did eliminate the Bias Response Team,” she said, “in Ann Arbor alone, the school still employs 76 diversity-related administrators who cost taxpayers and students more than 10 million dollars in compensation every year. They focus on every kind of diversity except a diversity of ideas. And the University of Michigan isn’t alone. More than 200 other colleges and universities still have teams of speech bullies with the power to punish perpetrators of hurt feelings.”

“the school still employs 76 diversity-related administrators who cost taxpayers and students more than 10 million dollars in compensation every year. They focus on every kind of diversity except a diversity of ideas.” https://t.co/GwR6Bpboj0