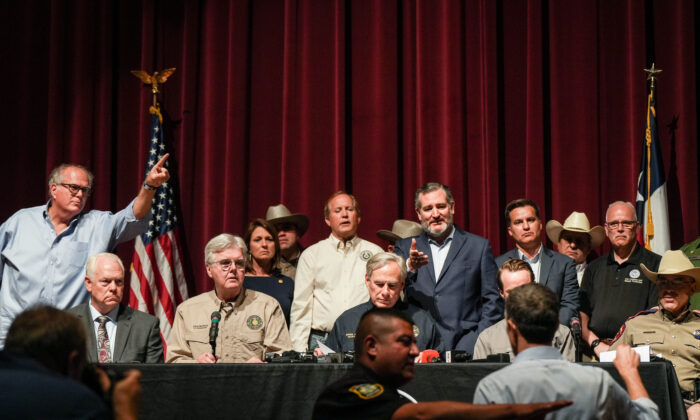 Mayor of Uvalde Don McLaughlin (back-left) tells Beto O’Rourke (front-right) to leave as the latter disrupts a press conference held by Texas Gov. Greg Abbott and federal, state, and local officials a day after a mass shooting at an elementary school, in Uvalde, Texas, on May 24, 2022. (Charlotte Cuthbertson/The Epoch Times)
Democrats

O’Rourke, a Democrat, started yelling at Abbott about gun control laws during the May 25 press conference. He was immediately branded an “embarrassment” by Lt. Gov. Dan Patrick.

Don McLaughlin, mayor of Uvalde, where the shooting occurred, told O’Rourke: “He needs to get his [expletive] out of here. Sir, you are out of line. Please leave this auditorium.

“I can’t believe you, you sick son of a [expletive], you would come to an event like this to make it a political issue. [Expletive] like you, get out of here.”

Sen. Ted Cruz (R-Texas), who was standing behind Abbott and who defeated O’Rourke in a 2018 U.S. Senate race, told him to “sit down.”

Officials say 18-year-old Salvador Ramos shot and killed 19 children and two adults before he was killed by responding law enforcement officials. During the press conference, it was revealed that Ramos purchased the firearms after he turned 18.

“Before coming out here, we had a long discussion with the law enforcement at all levels. … I asked the sheriff and others an open-ended question and got the same answer from the sheriff as well as from the mayor of Uvalde. The question was, ‘What is the problem here?'” Abbott said. “They were straightforward and emphatic. They said we have a problem with mental health illness in this community.”

That’s when O’Rourke, who was born Robert Francis O’Rourke, approached the stage and asked, “When are we going to do something?”

“You’re offering us nothing,” he yelled before he was removed. “The time to stop the next shooting is now, and you are doing nothing.”

Later in the press conference, Abbott noted that teenagers in Texas have been able to buy guns for decades.

Responding to O’Rourke, Abbott said that “there are no words anybody shouting can come up here—and do anything—to heal those broken hearts.”

After he was removed, the Democratic challenger addressed reporters.

When O’Rourke, a former congressman, ran for president in the 2020 election, he signaled that he was in favor of stringent gun-control measures.

“Hell, yes, we’re going to take your AR-15, your AK-47,” O’Rourke said during a presidential debate in late 2019, referring to a gun buyback program for certain rifles.

Fully automatic AK-47s are illegal in the United States unless they were manufactured before January 1986, although semi-automatic versions aren’t.