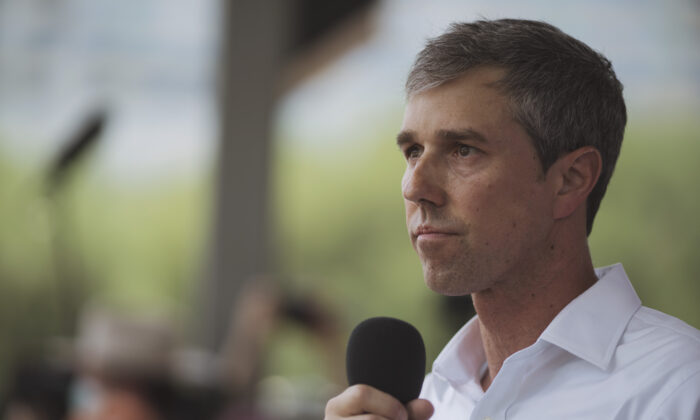 O’Rourke, a Democrat and former congressional representative, appeared at the Thurgood Marshall Recreation Center in the Red Bird area of Dallas. The event also included speeches from gun violence survivors.

He also accused Abbott of not doing enough to address gun violence after mass shootings. Abbott is currently seeking a third term as the state’s governor.

“Always he promises, there’s going to be some action … thoughts and prayers aren’t enough this time,” said O’Rourke.

He then told the audience members: “The only way to stop another shooting is to vote.”

During the event, O’Rourke also doubled down on his desire to ban so-called “assault rifles.”

O’Rourke drew national attention during his failed presidential bid in 2019 when he declared he wanted to confiscate legally owned AR-15 and AK-47 sporting rifles, but during his race for governor, he had toned down his rhetoric and begun stating his support for the Second Amendment, apparently in a bid to compete with Abbott.

O’Rourke’s appearance in Dallas came shortly after he was escorted out of Abbott’s press conference on May 25 following the shooting at Robb Elementary School in Uvalde that killed 19 children and two adults.

At that conference, O’Rourke approached the platform where Abbott and several other state officials were sitting on the stage and interrupted Abbott, asking “When are we going to do something?” before yelling, “You’re offering us nothing.”

Moments before, Abbott had told the audience that before arriving at the event, he had asked law enforcement officials at all levels, “What is the problem here?” to which they had all replied that the issue in the community of Uvalde was “mental health illness.”

O’Rourke, who was born Robert Francis O’Rourke, also yelled that “the time to stop the next shooting is now, and you are doing nothing” before being removed from the auditorium.

Later in the press conference, Abbott noted that teenagers in Texas have been able to buy guns for decades and said the Biden administration needs to address mental health issues across the country.

O’Rourke is widely expected to continue to focus much of his campaign on gun control following the latest mass shooting.

Ahead of his appearance in Dallas on June 1, O’Rourke campaign spokesperson Chris Evans said in a statement to the Texas Tribune that the democrat believes “that we should act immediately to prevent the next mass shooting by prioritizing commonsense gun safety reforms that have broad, bipartisan support across the state.

“This includes popular policies such as repealing permitless carry, passing universal background checks, implementing red flag laws, enacting safe storage laws, and keeping weapons of war on the battlefield by preventing their sale in our communities.”

On May 31, Abbott issued a disaster declaration in Uvalde to fast-track state and local resources that will be made available to the community in the wake of the shooting.

And on June 1, the governor ordered the Texas School Safety Center to conduct comprehensive school safety reviews to ensure all public schools across the state are following the appropriate procedures to maximize safety ahead of the new school year.

A February poll from The Texas Politics Project at the University of Texas at Austin found that 43 percent of Texans believe gun laws should be more strict, while 34 percent said they should be left as they are, and 16 percent want them to be less strict.