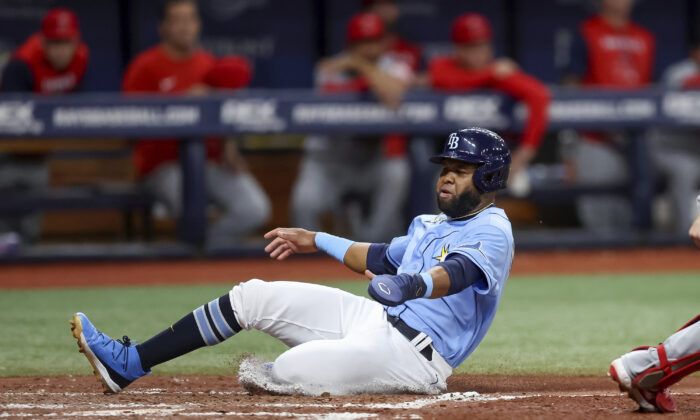 Bethancourt Stars at Plate, on Mound as Rays Beat Angels

ST. PETERSBURG, Florida—Christian Bethancourt had two run-scoring hits in the same inning and later moved from behind the plate to the mound to pitch a scoreless ninth as the surging Tampa Bay Rays beat the Los Angeles Angels 11–1 on Tuesday night.

Bethancourt homered and hit a two-run single in a six-run seventh that gave the Rays a 9–1 lead. With Tampa Bay ahead by 10 in the ninth, manager Kevin Cash sent his catcher to the mound.

Bethancourt was no ordinary position player pitching. His fastball topped out at 95 mph as he allowed two hits and struck out Luis Rengifo.

By contrast, Los Angeles infielder Phil Gosselin got three straight outs in the ninth on five pitches that ranged from 48 to 51 mph.

Los Angeles’ Mike Trout homered in the sixth for his 1,500th career hit. It gave him 1,023 runs scored, which is one short of Garret Anderson’s franchise record.

Corey Kluber (8–7) gave up one run on five hits in six innings.

The AL MVP left his pitching start at Detroit on Sunday after four innings with a stomach virus, and he pinch-hit in Monday’s 2–1 loss to the Rays.

The Angels have lost seven of eight and have totaled six runs over their last five games.

Manuel Margot and Harold Ramirez had run-scoring singles in the third off José Suarez (4–6) as the Rays took a 2–0 lead.

Suarez struck out five in a row after Ramirez’s hit. The lefty allowed three runs and eight hits in 5 1/3 innings.

Trout made it 2–1 on his 25th homer off Kluber, a shot that struck an overhanging left field catwalk.

Ohtani hit a drive later in the inning that was caught near the warning track in left.

Tampa Bay went up 3–1 in the sixth on Isaac Paredes’ homer.

Trout has three homers is 21 at-bats against Kluber. He has connected eight times in 90 at-bats at Tropicana Field.

Trout, who returned Friday after missing 28 games with an upper back-ribs injury, was lifted in the eighth for pinch-hitter Jo Adell.

He made two of his previous three career starts as an opener last year.

The Rays will counter with All-Star Game starter Shane McClanahan (11–5, 2.29). The left-hander has given up four runs over 13 innings in his previous two starts after a two-outing stretch where allowed nine runs in 10 2/3 innings.