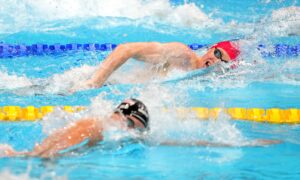 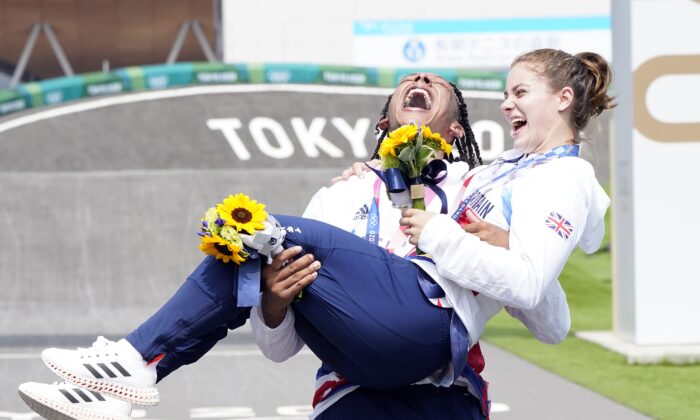 A long and arduous journey on and off the track ended in jubilation as Beth Shriever won Britain’s first BMX gold medal at the Olympic Games on Friday.

A succession of injuries, the withdrawal of UK Sport funding, a cancelled “holiday of a lifetime” for her family, and the trials of training in lockdown were all erased as the 22-year-old, from Leytonstone, east London, won her race in Tokyo.

After even more tension during a 45-minute rain delay before the semi-final, Shriever held off defending champion Mariana Pajon, of Colombia, in a desperate finish in the final to take the gold.

She collapsed on the track in a mixture of triumph and relief before being hoisted aloft by jubilant team-mate Kye Whyte, the 21-year-old who minutes earlier had claimed Britain’s first BMX racing Olympic medal with a silver in his event.

Shriever gave Britain its sixth gold medal of the Games, keeping it in sixth place in the medals table, after a silver and bronze in the pool for Duncan Scott and Luke Greenbank, and a bronze for the men’s rowing eight.

Her event was watched by her delighted family at home in Essex, who—following a nerve-shredding race—were able to reflect on the gold medallist’s long and bumpy ride to Tokyo after she first got on a BMX bike around the age of eight.

“We were screaming at the TV saying ‘Keep pedalling! Keep pedalling!’” said Shriever’s mother Kate, who watched the race with husband Paul, sons Noah and Luke, and the rider’s partner Brynley.

“It was quite tight but it’s just amazing that she’s done it. We’re all over the moon. She’s just such a lovely, caring, and determined person. She’s had so many injuries—it’s quite a dangerous sport—so she really deserves this.

“We knew she was relaxed and happy. She seemed really in tune with riding and she loved the track. But with BMX it’s anyone’s game, and anything can happen.

“It’s been a very long night. We were all up at 2 a.m. for the semi-final, and then the rain delay happened, but we’re just so really proud of Beth and very happy for her.”

Kate Shriever said her daughter had taken to BMX racing from a young age, starting in regional events, followed by nationals and then European championships.

“We’d drive her to Manchester every other weekend after she made it into a young talent team,” she told the PA news agency.

Shriever’s path to becoming an Olympian was dotted with injuries. She broke a wrist three times, and suffered a tibia and fibula fracture, which required metal plates to be inserted into her leg—only for the procedure to have to be repeated some 18 months later after another crash.

“She’s also got hypermobility, so her joints dislocate easily. She dislocated her shoulder and needed pretty major surgery at the beginning of this year, so that wasn’t that long ago,” her mother added.

While Shriever had earlier become the flagbearer for women’s BMX in Britain—she was junior world champion in 2017—her progress suffered a setback when UK Sport decided to fund only male BMX riders following the Rio Olympics.

“She moved home and got a part-time job. We supported her for a couple of years and took her to all the world cups and everything,” Shriever said.

Her daughter’s plight was eventually eased when British Cycling stepped in with funding, but the onset of the coronavirus pandemic was another blow.

“She moved to Manchester two years ago, just before COVID, but then had to move home for about seven months when lockdown started,” said Shriever, an office manager, whose husband was temporarily out of work due to the pandemic.

“British Cycling sent weights and gym equipment so she could train at home. She’s got a really good work ethic with training, and worked really hard in lockdown, and didn’t really stop.

“The difficult part was not racing for 18 months. That was hard, because you don’t really know where you are compared to the other riders.

“There wasn’t a proper race until they went to Verona in Italy last month, and at least that gave her confidence.

“The only downside was we had a big family holiday planned for Tokyo, but that had to be scrapped. We’re really sad we’re not there with her, but at least the technology has helped stay in touch.”

Meanwhile, Scotland’s Duncan Scott won Team GB’s sixth swimming medal of the Games—one of the country’s best hauls in the pool since London in 1908—as he fell tantalisingly short of gold, coming second in the men’s 200-metre individual medley final. It came after Cumbria’s Luke Greenbank took bronze in the 200-metre backstroke.

However, news from the Sea Forest Waterway was not as encouraging as Team GB ended the rowing regatta with just one bronze and one silver, contrasting with three gold and two silver from the Rio Games of 2016.

Britain’s men’s eight took the bronze medal on the last day of the regatta behind New Zealand and Germany, following silver from the men’s quadruple sculls team, and a fourth-place final finish on Friday for Welsh single sculler Vicky Thornley.