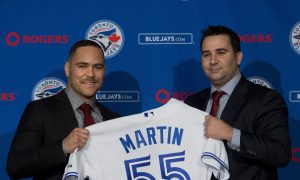 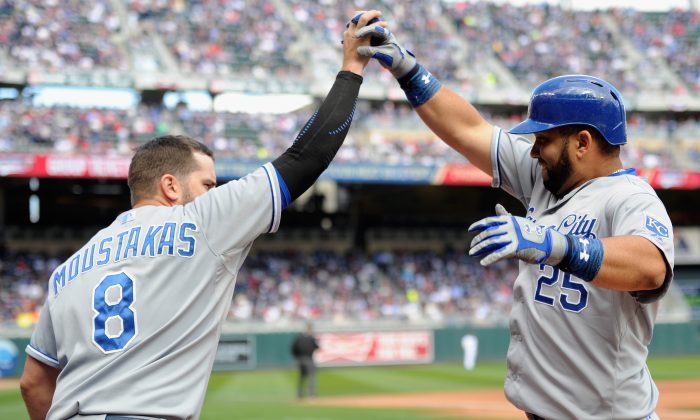 Mike Moustakas of the Kansas City Royals and teammate Kendrys Morales have helped power the team's offense to the best start in the majors. (Hannah Foslien/Getty Images)
Baseball

Best Record in the Majors: Could the Royals Strike Twice?

After their 12–3 win yesterday in Minnesota, the Kansas City Royals have the league’s best record at 7–0, which means I finally get to write this article.

As a writer, you never want to be too partial about your own team—even if they make an unlikely run to the World Series, like last fall. (FYI, in that case, you incorrectly pick against them the first three rounds, then boldly pick them to win the World Series only to see them fall flat on their faces against Madison Bumgarner and the Giants, thus achieving the writer’s version of the Golden Sombrero. Thank you very much.)

I’ve followed the team my whole life despite moving to the New York area in 1997, and could write all day on their mostly moribund history, but who really cares about a small-market club that annually competes for the basement of the AL Central? (Based on their attendance/TV ratings the last few years, very few.)

That was until 2013. The team built up their farm system a couple of years back and waited patiently for the right time to go all in for James Shields (the trade still divides us), put together a winning season in 2013, and finally break their 29-year playoff drought last season.

But last year was last year, and the Royals’ history is more on par with that of the Bad News Bears. So it seemed improbable that their two-year run would continue into 2015—especially after the team lost Shields to the suddenly aggressive San Diego Padres.

So many picked against their returning to the playoffs this year—including myself, who thought 85 wins and a close wild-card run would be their fate.

It’s still a possible prediction, though the other 11 teams that started 7–0 (since 1980) averaged a 92–70 season—which would almost guarantee a postseason run. (Of course, the worst of those aforementioned 11 teams was the 2003 version of the Royals who started 16–3 but ran out of gas at the end, finishing 83–79. We still loved it.)

But this is an impressive start. Kansas City has outscored their opponents by 34 runs through seven games—that’s already seven more than they did all of last year.

Granted it’s an unsustainable pace for any team, but they still have a lot of what worked last year.

With Lorenzo Cain in center, Alcides Escobar at short, Omar Infante at second, and Salvador Pérez as catcher, the Royals have a very formidable defense up the middle. Cain should have won a Gold Glove last season (had he not been shifted to right so often), Pérez has won them in back-to-back seasons, while Escobar is very close at shortstop, and Infante is solid at second.

Even at the corners, they excel with Alex Gordon winning four straight in left and Eric Hosmer winning the last two at first.

While the starting pitching has been solid, sans Shields, the normally dominant bullpen has been lights out again, allowing no runs in 19 innings.

It’s the offense that’s looks completely unsustainable. The Royals are hitting .329 with a .532 slugging percentage and .401 on-base percentage. Last year, they were famously last in both home runs and walks but ranked first in steals and fewest strikeouts.

Other than the hitting coming back to earth, it’s manager Ned Yost’s player usage that concerns me the most.

Last year he successfully ran Pérez into the ground as catcher, rendering him ineffective at the plate in the second half of the season as the then 24-year-old catcher set a modern-day record for most games started in the position (158), between the regular season and playoffs.

This year Ned is back at it again, allowing only Alex Gordon (and his injured wrist) a pair of days off while every other starter (including Salvy) has started every game.

I guess you can’t argue with success.