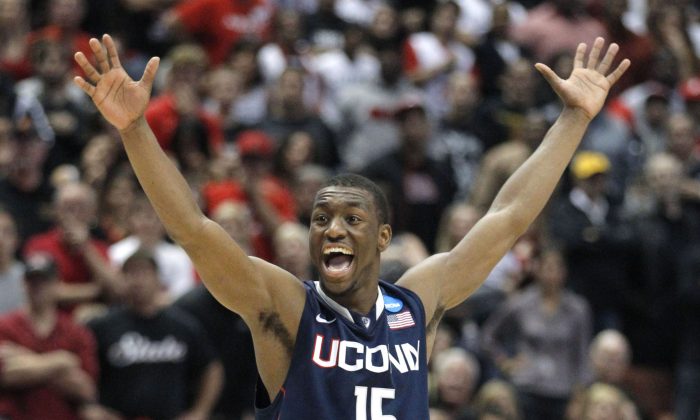 The high-pressure, single-elimination NCAA Tournament is where stars are born, heroes are made, and championships are won. Some players thrive under the pressure and become household names overnight. Here are the 10 best individual performances since 1980.

Davis averaged only 13.7 points a game during Kentucky’s run to the 2012 National Championship, but his 11.8 rebounds and 4.8 blocks per contest set the tone on defense. In the title game against Kansas he missed 9 of 10 shots, but his 6 blocks and numerous other shot alterations kept the Jayhawks from getting almost anything in the point.

The ultra-quick Walker averaged 23.5 points, 5.7 assists, and 6.0 rebounds per game in helping the Huskies to their third national title under Jim Calhoun. At his best, the 6-foot-1 guard scored 33 in a 69–58 second-round win over Cincinnati and then followed that with 36 in a 74–67 win over second-seeded San Diego State.

Williams did his biggest damage in the East Region scoring 31 in the second round against Missouri, 34 in the next round against UCLA, and then burning USC for 28 points, 6 assists, and 7 rebounds in the Regional Finals. For the tournament, he averaged 25.7 points and 5.2 assists per game as the Blue Devils cut down the nets.

Anthony, the 6-foot-8 do-it-all freshman forward, proved to be an impossible matchup in the NCAA Tournament leading third-seeded Syracuse all the way to their first and only title under Jim Boeheim. Anthony averaged 20.2 points per contest along with 9.8 rebounds during the run, including a 33-point, 14-rebound performance in the National Semifinals over top-seeded Texas.

Robinson first made a name for himself in the ’86 tourney, leading the seventh-seeded Midshipmen all the way to the Regional Finals, where they fell to Duke. But the 7-foot-1 shot-blocking center had a monster tournament along the way, averaging 27.5 points, 11.8 rebounds, and 5.8 blocks per game.

His 22-point, 14-rebound, 9-block effort in the Sweet 16 helped Navy edge Cleveland State 71–70. In the second-round match against second-seeded Syracuse, Robinson scored 35 points (including 21–27 free throws) and grabbed 11 rebounds as Navy pulled off the 97–85 upset. (Robinson would put up an even 50 against Michigan during the following year’s tournament in an opening-round loss.)

The sharpshooter Rice posted four 30-point efforts in leading third-seeded Michigan to a thrilling title, including a 34-point, 6-rebound effort in a Sweet 16 win over second-seeded North Carolina. Overall, his 184 points (30.7 per game average) in the tournament is a record that still stands.

Olajuwon in 1983 was the first player from a losing team to win the Final Four’s Most Outstanding Player. Although the sophomore center averaged “only” 18.8 points and 13.0 rebounds overall in the five-game run, he scored 21 points and grabbed 22 rebounds in the National Semifinals win over Louisville and then came up with 20 points and 18 boards in the stunning loss to NC State for the title.

Bobby Hurley actually won the Final Four’s MOP in ’92, but without Laettner’s unbelievable heroics to get the team past Kentucky in the Regional Finals, the Blue Devils wouldn’t have repeated as champions. Laettner averaged 22.0 points and 7.5 rebounds per game in the East Region and had 31 points off of a perfect 10-for-10 both from the line and the floor—including college basketball’s most incredible buzzer-beater ever—as Duke prevailed 104–103 in overtime.

Curry—now the NBA’s reigning MVP—was an unheard-of entering the 2008 NCAA Tournament. So was his 10th-seeded Davidson squad. He quickly changed all that, though. First, the sharpshooting guard put up 40 points in an opening-round upset of seventh-seeded Gonzaga. Then in the second round against second-seeded Georgetown, he single-handedly rallied the Wildcats from an 11-point halftime deficit by scoring 25 of his 30 points after the intermission. In the Sweet 16, he burned third-seeded Wisconsin by scoring 33 as the Wildcats won going away by 17. Finally, Kansas “held” him to 25 points in a 59–57 Regional Final loss and Davidson’s unforgettable run was over.

Manning and the sixth-seeded Jayhawks were just 21–11 entering the Big Dance in 1988, but the Larry Brown-coached squad got hot at the right time and ran the tables to an improbable championship. Manning was a big reason why.

The 6-foot-10 forward averaged 27.2 points and 9.3 rebounds a game and was especially hot in the Final Four. Manning put up 25 points, 10 rebounds, and 7 blocked shots in the National Semifinal win over second-seeded Duke and then 31 points and 18 rebounds as Kansas defeated top-seeded Oklahoma to claim the title.