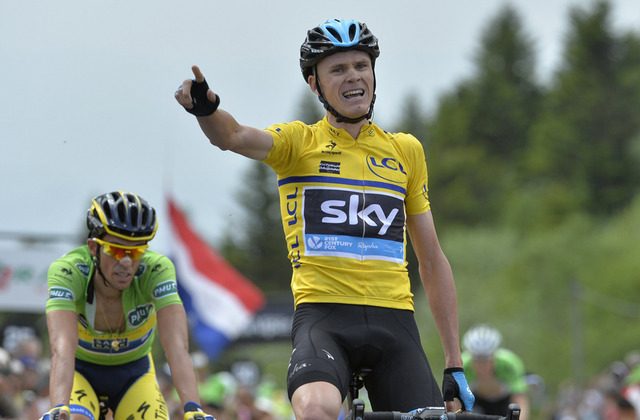 Best Cyclists of the Era Meet in the Critérium du Dauphiné

Defending champion Chris Froome of Team Sky captured his second successive stage in the Critérium du Dauphiné on Monday, winning on the first road stage of a race widely used as a tune-up for the Tour de France.

The Sky leader already wore the race leader’s yellow jersey after winning Stage One, a ten-kilometer time trial, on Sunday.

In Stage Two Froome faced off against his chief Tour rivals, Tinkoff-Saxo’s Albertto Contador and Astana’s Vincenzo Nibali on an Hors Categorie summit finish. It was the first head-to-head test of these three Tour favorites, and the Froome, the 2013 Tour de France winner, came out on top.

“I gave everything today. In such a climb, it became a great battle with Alberto Contador. We rode flat out,” Froome told Cyclingnews.com. “It was really tough between the two of us. I tried to attack him a couple of times but he was very strong.

“Everyone here is almost at the same level as at the Tour de France. Today it was our first duel with the two of us in form, so I’m delighted to win in these circumstances.”

The 159-km stage contained six categorized climbs, two Cat 2s, a Cat 3, and a Cat 4 before the final 13.6-km ascent which averaged only 6.6 percent grade but ramped up over eight percent through the final kilometers.

After the breakaway was reabsorbed, Froome waited a couple of kilometers, letting the long climb tire out the twenty or so riders still in the lead group. When the incline began steepening at about 5.2 km, Froome attacked; only Alberto Contador was initially able to respond immediately. Vincenzo Niblai along with Wilco Kelderman of Beljkin, and Jürgen Van Den Broeck of Lotto, managed to gruind their way back up to the leading pair.

As soon as they did, Froome attacked again, driving hard for 200 meters in an impressive show of power. Again only Contador was able to match the Sky rider, and again everyone else had to struggle back up slowly.

As soon as the chasing trio caught the leading pair Kelderman launched his own attack. The 23-year-old Dutchman showed no fear of his powerful foes; he left them behind and made them chase.

Froome led the chase, dragging Contador and Van Den Broek up to the young Belkin rider. Nibali couldn’t muster another effort right then, so he waited for Garmin’s Andrew Talansky to ride by, and the pair pursued the leading quartet.

With three km to go the leading four had a few dozen meters on the chasing pair. Kelderman tired another attack, and Van Den Broek also took a shot, but Froome wouldn’t let anyone get an inch of advantage. With 2.7 km to go Nibali and Talansky joined the leading group, making six riders in the hunt for the stage win.

Talansky tried his hand with a surge as soon as he caught the leaders, but again, Froome personally quashed the effort. Kelderman tired again with 1700 meters left, and again Froome caught him. Talansky was next to attack, and once again it was Chris Froome who pulled the pack up to the attacker.

The Sky rider waited until he was well into the final kilometer before he made his own move, another long, strong acceleration which only Contador and Kelderman could match. Froome slowed briefly, the made another surge, practically sprinting the last few hundred meters up the eight-plus percent grade.

Alberto Contador stayed glued to the Sky leader’s wheel; with 150 meters to go the Spanish champion made his final effort and almost drew even with Froome, but Contador lacked the power to make a pass.

Chris Froome crossed the finish line with Contador only a few inches from Froome’s back wheel. Froome gained four seconds on Contador due to bonus time for finishing first, but more important, he showed the Tinkoff team leader that Froome was the more powerful climber—at least on that day.

Wilco Kelderman and Jürgen Van Den Broek each showed impressive form on the final climb, and sit third and fifth in General Classification as a result of their efforts.

Vincenzo Nibali did not show so well in Stage Two. The Astana rider struggled on the final climb and cracked completely within sight of the finish line; he lost 27 seconds to the race leader, and lies sixth in GC behind Garmin-Sharp’s Andrew Talansky, fifty seconds behind Chris Froome.

Froome’s powerful performance—he personally covered every attack in the final five kilometers and road the last few hundred meters flat-out uphill—does not necessarily guarantee that he will win the Dauphiné, and certainly not the Tour de France.

While a strong personal effort can be impressive, it is not likely that Chris Froome is so much more powerful than his rivals that he can do the entire thing on his own. Monday could have been a huge psychological blow to his rivals—or it could be ignored by them. Alberto Contador and Vincenzo Nibali, with seven (undisputed) Grands Tours wins between them, are not easily fooled. They will know that if Froome tries to ride the entire eight stages as he rode Stage two, he will likely burn out by the finish. Even if he could sustain such effort through the Dauphiné, there would be no way he could do it through 21 stages of the Tour.

Froome’s team showed its strength in Stage Two; Sky as usual pushed the pace until the final climb and then let he team leader finish it off. However, Nibali’s Astana squad still had two riders left halfway up the final climb. Whether Astan’s support riders can last through the entire race remains to be seen.

It should also be noted that Sky’s Ritchie Porte, Chris Froome’s most important lieutenant, had to slow down on the final climb and leave the work to Mikel Nieve. Porte has been plagued by injury and illness, and seems still not to be on form. He will be sorely needed in the Tour, and sorely missed if he is not ready.

As for Alberto Contador, he managed to stick to Froome through every acceleration. Ture the Spanish champion did not launch any of the vicious attacks for which he was once known, but if he can keep close to Froome, then all he needs is one moment of weakness in one stage to take the lead and perhaps the overall victory.

The climbs in Stage Two were long, not steep; perhaps Contador will have the edge when the climbs get really tough. Or perhaps it will come down to will, conditioning, and luck.

The pair are closely matched. Sky has the stronger team but Contador has enough strong teammates that this should not be the deciding factor.

The 2014 Critérium du Dauphiné, and perhaps the 2014 Tour de France, could be those most rare and excellent events: head-to-head contests between the two best practitioners of their discipline alive today, and both at the peak of their form.