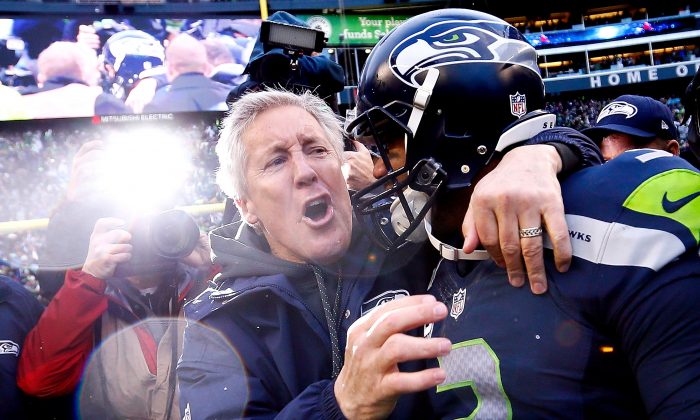 Pete Carroll, Russell Wilson, and the Seattle Seahawks scored a pair of TDs in the final minutes of regulation to force overtime and eventually beat Green Bay in the NFC Championship game. (Kevin C. Cox/Getty Images)
Other US

Best Comebacks of 2015 in Professional Sports

The Royals—facing elimination—opened the eighth with five straight singles, followed by a two-run error and just like that the game was tied and the once-raucous Houston crowd sat in stunned silence. Kansas City would plate one more that inning and two more in the ninth to extend the series to a fifth game that they would win, courtesy of Johnny Cueto and suddenly the playoff momentum was all theirs.

The Rockets trailed 3–1 in the series before winning Game 5 to force this game in Los Angeles. After a close first half—Clippers led 64–62 at the break—L.A. went on a 23–6 run to blow the game open and finish the series—or so they thought. The Rockets went on a 49–15 run over the next 14 minutes to turn a 19-point deficit into a 15-point lead and won going away to force a Game 7 in Houston—which they won.

US Open 3rd Round

The 2015 was not a kind one to Rafael Nadal. His 39-match winning streak at the French Open was stopped by Novak Djokovic, he didn’t advance past the quarterfinals in any of the majors, and he fell to 10th in the rankings for the first time in more than a decade. But the kicker was this third-round defeat at the hands of Fognini where Nadal blew a two sets to love lead for the first time in 151 Grand Slam matches. The three-hour, 45-minute match was highlighted by a rollercoast 52-minute final set featuring seven consecutive breaks of serve.

Seattle, after a scoreless first half, was trailing 19–7 with five minutes left when Russell Wilson was picked off by Green Bay safety Ha Ha Clinton-Dix who conservatively decided to down the ball instead of trying to return it—as if the game were over. Not so fast. After a Green Bay three-and-out, the Seahawks got the ball back and scored with just over two minutes left, recovered the ensuing onside kick, and reached the end zone again to suddenly take a 22–19 lead with 1:25 left. The Packers sent the game to OT with a late field goal, but Seattle’s Russell Wilson found Jermaine Kearse for a 35-yard score to win it in the extra period.

The Jayhawks, needing a victory to secure their 11th straight conference title, were down their best player—Perry Ellis, who hurt his knee in the first half—and trailed 40–22 with just over a minute left in the first half before an epic Allen Field House rally saved the day. By halftime, the lead was down to 14, but KU still trailed by eight at 57–49 with just under two minutes to go before pulling off a miracle.

Two Kansas free throws, a layup, and a jump shot later—sandwiched around a pair of West Virginia turnovers—pulled the Jayhawks to within two with 47 seconds left. The Mountaineers then went just 2-for-4 from the free throw line down the stretch allowing Kansas to tie it at 59 and send the game to OT. In the extra period, Bill Self’s club grabbed their first lead in nearly 40 minutes of game time when they went up 64–63 and never looked back.

Michigan State trails 23–21 with 10 seconds left, before shocking Michigan with a game-winning fumble recovery for a TD

There were larger margins of comeback in the college football season—Rutgers was down 25 to Indiana, and North Carolina trailed Georgia Tech by 21 before winning, to name a couple—but none looked as bleak as this one or were in a bigger game. With just 10 seconds left, the Wolverines only had to punt it away to secure a win and likely dash Michigan State’s conference title hopes. Instead, Michigan punter Blake O’Neill bobbled the snap, tried to scoop it up and kick it, but instead the ball fell right into the hands of Michigan State defensive back Jalen Watts-Jackson who ran it 38 yards for the game-winning score as time ran out. Michigan State, with the crucial win, would go on to win the Big Ten and advance to the playoffs.