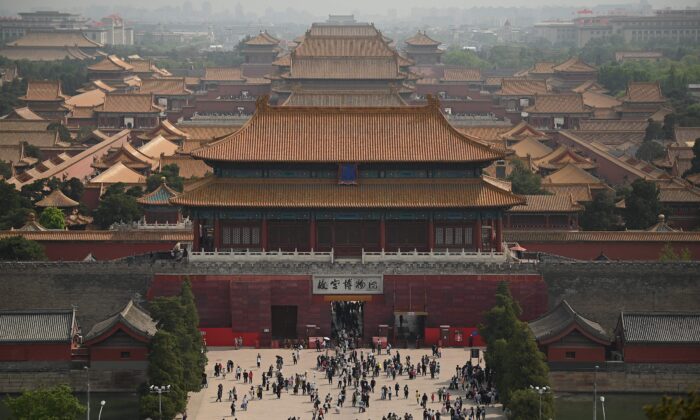 People visit the Forbidden City during the Labor Day holidays, which take place from May 1 to May 5, in Beijing, on May 3, 2021. (Noel Celis/AFP via Getty Images)
Thinking About China

As the competition between America and communist China becomes increasingly intense, it is essential that Americans have a deep understanding of China and of the history of its relations with the outside world and especially with the United States.

Here is a brief review of key books that can provide the foundation for that comprehension.

For most of human history, China was the dominant civilization and power of Asia, and, indeed, in the wake of the fall of the Roman Empire in 476 A.D., it was the world’s largest, most powerful empire for the next 1,350 years. Because the decline and eventual fall of that empire gave rise to key forces driving China today, it is important to understand the causes and courses of that fall.

The best telling of that tale is the book by James L. Hevia, titled “Qing Guest Ritual and the Macartney Mission of 1793.” It relates the sending by King George III of a 400-man mission under the leadership of Lord George Macartney to China’s Qing Dynasty Emperor Qianlong for the purpose of establishing formal state relations and a framework for conducting trade between the British and Chinese empires. The dynasty was then at the height of its power and considered all other states as barbarian inferiors if not outright vassals.

The first challenge for Macartney was literally to get in the door. All petitioners of the emperor were required to perform the kowtow (kneel and touch the head to the floor) upon entering the sacred presence. Although customary in China not only for the emperor but also for elders and superiors, this was not the British way. Eventually Macartney compromised with a kind of half kowtow.

After a couple of weeks of entertainment and demonstrations of British manufactures, Macartney was sent away with a letter addressed to King George III declaring that: “We have never valued ingenious articles, nor do we have the slightest need of your country’s manufactures. Therefore, O King, as regards your request to send someone to remain at the capital, while it is not in harmony with the regulations of the Celestial Empire we also feel very much that it is of no advantage to your country.”

The emperor was, of course, unaware of the industrial revolution and the great shift in the balance of global power it was driving. Britain of the 19th century was not to be denied. In the wake of the opium wars of mid-century, Britain (along with the United States and France) came to dominate China, which, having fallen from celestial glory, felt humiliated and sought redemption and even revenge.

The search for redemption is well portrayed by Orville Schell and John Delury’s book, titled “Wealth and Power.” It shows how China struggled to find the secret of Western industrialization. It wondered if it had to adopt Western values to achieve Western-style wealth and power. Or could it strip the technology away and paste that into Chinese characteristics?

Many schools of thought contended as the empire languished and eventually collapsed in 1911. Emerging as the president of a new, putative democracy of China, Sun Yat-sen lamented that China was “like a sheet of loose sand.” He struggled mightily to pour glue over the grains, but he died young and his successor, Chiang Kai-shek, faced the stubborn opposition of the Chinese Communist Party (CCP) that was born in Shanghai in 1921 and emerged triumphant in 1949.

The best guide to the truth of that story is the book “Mao: The Unknown Story” by Jung Chang, who grew up in China during Mao Zedong’s Cultural Revolution. She is also the author of “Wild Swans,” the story of her and her family’s experience of that period of Chinese history.

Amid the quasi liberalization of China following Mao’s death and in the wake of the collapse of the Soviet Union, Chang was able to obtain access to both Chinese and Russian files from which she pieced together the truth of the rise of Mao and the Party and of its descent into the destructive nightmare of the Cultural Revolution. She also determined that it was an American hero, former World War II Army Chief of Staff and later Secretary of State George Marshall, who handed China on a silver platter to Mao and the CCP in 1948–49.

The best telling of the story of the long love-hate relationship of the United States and China is that by John Pomfret in his “The Beautiful Country and the Middle Kingdom.” He begins by noting that the tea tossed into Boston Harbor by American revolutionaries had been shipped from the southern Chinese city of Xiamen.

Then in February 1784, the three masted, 360-ton Empress of China sailed from New York harbor to become the first American merchantman on the “China run.” It carried beaver skins, Mexican silver dollars, and 30 tons of American ginseng. It returned on May 11, 1785, to a 13-gun salute (one for each of the U.S. states) carrying tea, cloth, and porcelain. The voyage earned about $1 million in today’s dollars.

As time passed, however, the big problem for the Americans came to be finding things the Chinese wanted to buy. Often it boiled down to silver. When finding enough silver became problematic, the Americans joined the British in pushing opium into China. Indeed, the Delano side of the family of President Franklin Delano Roosevelt made its fortune in the opium trade.

But if the Americans sold dope, they also sent missionaries who, while failing to save many Chinese souls, did establish schools and hospitals that became long lasting and important institutions in China.

Moreover, it was significantly because of U.S. missionary concern for China’s future that the United States opposed Japan’s invasions and land grabs in China, and eventually imposed the embargo on oil exports to Japan that resulted in the Japanese attack on Pearl Harbor and World War II in the Pacific.

It was American aid and money that kept Chiang Kai-shek’s government and army alive and that made him one of the so-called Big Four (along with Russia’s Josef Stalin, the UK’s Winston Churchill, and America’s Franklin Roosevelt) of World War II.

However, Pomfret confirms Jung Chang in noting that it was George Marshall and the Truman administration that eventually undermined Chiang and effectively, without fully realizing what it was doing, turned the country over to Mao and his Communist Party.

Over the long term, Pomfret sees the U.S.-China relationship as a pendulum that swings between ecstatic enthusiasm and harsh antagonism. In recent times, he sees President Richard Nixon’s so-called “opening to China” in 1972 as a period of excess optimism obscuring the fact that Nixon and his national security adviser, Henry Kissinger, got taken to the cleaner by Mao and Zhou Enlai. He sees the present environment of competition and conflict as a matter of the pendulum swinging back.

There are two books that address the present dynamic exceptionally well. One is “The Long Game” by Rush Doshi, who is now a member of the U.S. National Security Council staff. Doshi was formerly a China scholar at the Brookings Institute, and his book addresses the key question of whether or not China’s so called “opening” after the death of Mao was a truly an opening and a shift to market capitalism and more liberal politics, or a ruse to enable quick access to Western technology and financing for purposes of ultimately defeating the West and making the world safe for communist authoritarianism.

Doshi’s analysis turns on the meaning of Deng Xiaoping’s injunction to his communist comrades to “hide your strength and bide your time.” Through painstaking pursuit of CCP documents and articles, Doshi demonstrates that the purpose of the Party has always been to use stealth to overtake the world’s democracies and eventually to become the global hegemon.

Most recently, Elizabeth Economy of the Council on Foreign Relations and the Hoover Institute (now serving as a special assistant to Secretary of Commerce Gina Raimondo) has published the book “The World According to China.” She makes clear that China—under Xi Jinping and the CCP—is bent on displacing the United States as the global hegemon and on replacing liberal democracy with more authoritarian forms of government.