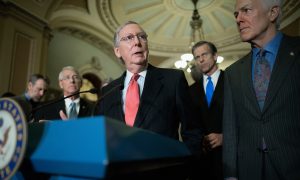 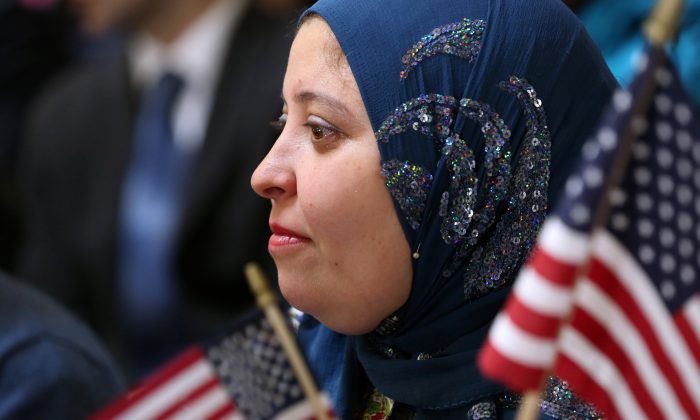 Puja Nanda from India takes part in a naturalization ceremony to become an American citizen at Federal Hall in New York on March 22, 2013. (John Moore/Getty Images)
US

Millions of illegal immigrants face uncertainty after a federal judge put President Barack Obama’s program offering protection from deportation on hold. The Judge’s decision can be reversed in a matter of weeks, but it can also be in place long term.

Last November Obama issued an executive order to shield some 5 million illegal immigrants from deportation. Most of them are parents of U.S. citizens or permanent residents. They would also get work permits and social security numbers.

In early December, the Texas attorney general filed a lawsuit against the Obama administration calling the executive action unconstitutional. Obama’s immigration program would place an unfunded mandate on states dealing with a drove of illegal immigrants suddenly eligible for additional services, the plaintiffs argued. The lawsuit was joined by 26 states.

The administration plans to appeal the decision as early as next Tuesday, so let’s explore how far the dispute can go.

The administration could buy more time by filing an “emergency stay” with the 5th Circuit Court of Appeals. They would have to prove that by not putting Obama’s program in place the administration faces irreparable damage, according to Ron Washburn, Bryant University legal professor. That’s a rather high bar to reach, but one that can be decided in a matter of weeks, multiple experts confirmed.

Yet, the district judge already decided the states are the ones facing damages if the program isn’t put on hold until courts reach a final decision.

Specifically, once people get their social security cards, they would be eligible for driver’s licenses. If courts in the end decide Obama’s action was unconstitutional, states would have a hard time getting the licenses back.

“[T]he States accurately allege that it will be difficult or even impossible for anyone to unscramble the egg,” the judge stated.

The administration may argue any such damages would be offset by increased tax revenue from people enabled to work legally.

From the administration’s point of view, the best case scenario starts with filing for the emergency stay while simultaneously filing an appeal. If the 5th Circuit Court gives the stay, Obama’s program would be back on track.

Problem is the 5th Circuit Court “is one of the most (if not the most) conservative federal appellate circuits,” stated Marc Harrold, an immigration attorney and former Homeland Security Department prosecutor, in an email response. Indeed, 15 of the 23 judges were appointed by a Republican president.

If, despite the conservative leaning, the court would side with the administration, the states would still have a chance to appeal to the U.S. Court of Appeals or the U.S. Supreme Court. Yet neither of these courts is obliged to accept the case.

At this point Obama’s program would be allowed to go forward while both parties argue in courts, possibly for several months, whether the program is constitutional.

Still, just the fact that the 5th Circuit could disagree with the district judge may prompt the Supreme Court to pick up the case, according to Jan C. Ting, Temple University law professor.

For the administration, an unsuccessful filing for a stay at the 5th Circuit Court leads straight to the worst case scenario. It would have to wait for the court to decide whether the injunction was appropriate and that could take months, while Obama’s program would remain dead in the water.

If the appeal of the injunction fails, the administration would have to appeal to the Court of Appeals or the Supreme Court, adding months more to the proceedings.

It is crucial for the administration to fight as hard as possible to win the appeal of the injunction. If the program is stalled for too long, even well into 2016, it may never be put in place before a new President gets into office.

Moreover, the case may create an important precedent on how much executive power the President wields, pointed out Prof. Washburn.