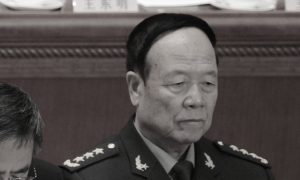 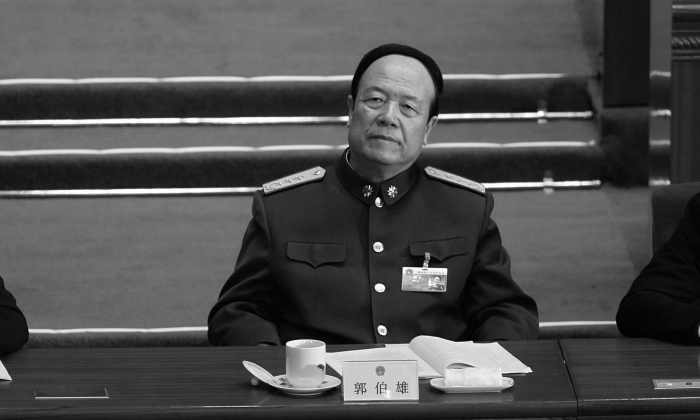 Guo Boxiong, vice chairman of China’s Central Military Commission, attends National People’s Congress on March 5, 2007. Guo is said to be been arrested along with his wife. (Andrew Wong/Getty Images)
China

Guo Boxiong, a retired vice chairman of the Communist Party committee that controls the military, is said to have been arrested along with his wife, according to several overseas Chinese news outlets.

Boxun, a citizen journalism website based in North Carolina, first reported the news. Boxun specializes in insider accounts and political rumors from China—some of them hit the mark and prove prescient, while others do not.

An arrest of Guo, at this point, would not prove out of the ordinary. Rumors of Guo’s downfall have been simmering for months amid reports that his brother, son, daughter, and daughter-in-law have all been detained by anti-graft authorities. The purge of Guo would be of a piece with Party leader Xi Jinping’s overall campaign to roll up the opposing political networks that have the potential to threaten him personally or obstruct his political agenda.

Boxun said multiple sources provided the news of Guo’s arrest on April 10, and that those in official circles in Beijing are already well aware of the matter. A heavy security presence, for example, is said to have been spotted near Guo’s family home in the Wanshouzhuang district of Beijing, Boxun reported its sources saying.

If confirmed, the 72-year-old will become the second vice chair of the Central Military Commission to be probed for corruption and punished. He would follow Xu Caihou, who passed away from bladder cancer last month before his court martial could commence, who was also accused of malfeasance and expelled from the Party last June.

Another overseas Chinese website, Mingjing News, also reported that Guo had been taken into custody and moved to a secret location. Mingjing sources say Guo had actually already been placed under house arrest for months and that authorities were forced to delay the announcement of his graft probe—originally scheduled for last month—due to Xu’s death.

The Mingjing report added that several dozen officers stayed back to inspect Guo’s home after he was taken away, and that part of his furniture and belongings were removed in trucks.

Guo was, along with Xu Caihou, believed to be the primary means by which former Party leader Jiang Zemin retained a measure of control over the military apparatus for years after he was out of power—from 2004 to 2012. Recent reports in the Chinese press—of Xu “emptying the power” from the chairmanship under former Party leader Hu Jintao, for example—appear to validate this view.

One of longstanding anecdotes, of unknown origin, about Guo’s ties with Jiang says that the relationship was cemented in the 1990s when Guo was the commander of the 47th Army Group. Jiang was doing an inspection of the Group in Shaanxi Province and went to nap after lunch. Guo personally took over the guard duty, dismissing the soldiers and standing outside Jiang’s door for two hours. As a new Party leader with no military background, Jiang was pleased with this overt display of loyalty and quickly brought Guo up through the ranks, making him deputy commander of the sensitive Beijing Military Region, and finally vice chairman—second only to Jiang himself—of the Central Military Commission, with the military rank of General.